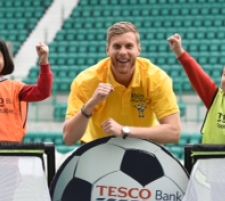 Hibs’ versatile defender Niklas Gunnarsson has capped a weekend to remember with an international call-up for Norway’s match with Portugal.

After starting on the bench at Hampden, he  played the final 10 minutes of Saturday’s historic Scottish Cup Final after taking over from Paul Hanlon,  before soaking up the incredible celebrations around Edinburgh on Sunday#s bus parade.

He will now join up with the squad on Wednesday ahead of the match this weekend.

Niklas told Hibs TV: “I am very proud to be in the squad, especially for a match against a country like Portugal.

“I received the call on Sunday morning before the victory parade, and it has topped off an incredible weekend for me. To see the reaction of the fans and everyone around the club has been very special.

“The call-up has justified my decision to move here in January and I’m looking forward to meeting up with the squad now.”

Goalkeeper Otso Virtanen has also been selected for international duty, joining up with the Finland Under 21 side for their European Championship Qualifier against Faroe Islands on 2nd July.