The Foundation of Hearts today announced the result of its members vote on the Tynecastle Stadium funding proposal.

The resolution is therefore passed. The Foundation of Hearts will now formalise with Bidco the changes to the financial agreement. From 1 June, funds will be paid to the club for application to the Tynecastle Redevelopment Project.

A statement from the Foundation of Hearts said:

We are absolutely delighted that the Foundation members have given such a resounding vote in favour of the offer from Ann. We thank you for this response and we are now very much looking forward to proceeding with the amended financial arrangements as authorised by the members.

The last two years have been historic on all fronts for the club and the Foundation. This vote is yet another very significant milestone on the road we are all travelling together and reconfirms our commitment to supporting the club with its ambitious developments at our spiritual home, Tynecastle. Once again, Hearts’ supporters have demonstrated that they share – and wish to deliver – the positive vision which has been forged for this club from what was only two years ago the bleakest of circumstances. The future is looking very bright. 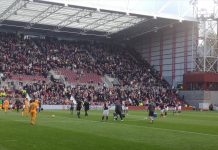 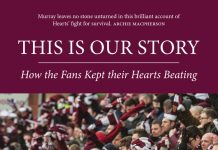 Sound of Silence From Tynecastle is Deafening