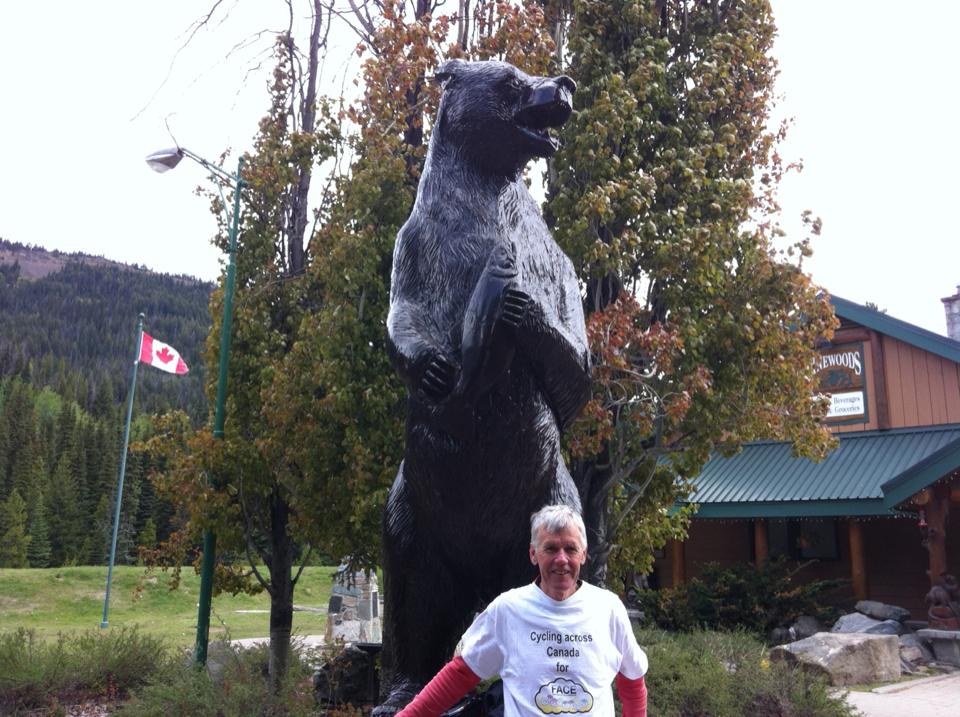 After a calamitous beginning to his Canadian adventure when his bike got stuck at Heathrow Airport, Edinburgh man Andrew Dickson has finally started his amazing 5000 mile cycle ride across Canada.

His first camping night went well in woods near Harrison Hot Springs then he headed to Hope where he received his first on-the-road donation from Milly at the Hope library/community centre.

He camped by the side of Skagit River and reached the summit of Allison Pass (1342m) on Saturday morning and didn’t have to get off and walk much to his delight.

Andrew then wore almost every piece of clothing to drop down from Allison Pass summit to Manning Park Resort for breakfast before crossing the Cascade mountain range which runs from Alaska, south through Canada and towards Southern USA. His second climb of the day saw him reach Summer Pass summit (1282m) and he camped at Kennedy Lake on Saturday night.

After some helpful advice from Destiny and Nadine at Princeton ‘Information he took the Old Hedley Road which had hardly any traffic, lovely views of the river and was flat. Andrew then camped above the Similkameen River in the valley of the same name about 10 miles west of Keremeos then by chance he called in at the KCafe in Keremeos for breakfast. The place was really busy with locals and the service was quick and friendly and the food excellent which was ideal for a touring cyclist.

At the time of writing, Andrew had just passed ‘Spotted Lake’ which is a culturally and ecologically sensitive area. It’s a medicine lake of the Okanagan people. Apparently the circles go from very faint, to complete rings, to fully coloured.

Andrew was keen to pass on a few messages via the Edinburgh Reporter: “Many thanks Milly whose advice helped me up to Hope Slide viewpoint, over Allison Summit Pass and beyond. I also spoke to some folk who we’re attending the British Columbia ‘Families Supporting Families’ conference (www.familysupportbc.com). This is an organisation which supports families with children who have disabilities. They are all fantastic and genuine superstars. Please check out their website. Also many thanks to Destiny (on right) and Nadine at Princeton ‘Information Centre’ for all their help, and finally a quick message for Neil Bain of Bain’s Bikes, Newhaven Main Street, Edinburgh. “Neil, the bike is running like a dream. Thank you”.

Whilst Andrew is doing this to raise money for three worthwhile carities he is also enjoying himself as he pointed out: “Just out of Keremeos it happened. Thought it might eventually. It was just a matter of time. There’s me cycling along minding my own business when I realised I had this huge grin on my face that just wouldn’t shift. And I hadn’t even seen a bear. Just shows what millions of little endorphins can do.”

Unlike most other charity rides, Andrew is cycling alone and unsupported, with all the necessary equipment, camping gear and clothing being carried on his bike.

The trip, which is totally self-funded, will hopefully raise money for three very worthwhile charities that in their own ways help to make a real difference in the treatment and care of children and young people in hospital.

The chosen charities are: The Craig Gowans Memorial Fund, Fighting Against Cancer Edinburgh (FACE) and the Sick Kids Friends Foundation.