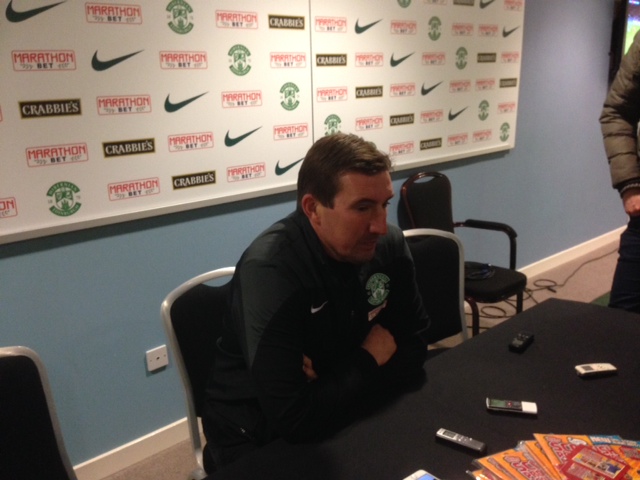 Hibs head to Falkirk tonight for one of the most important games in the club’s history. Victory sets up a Play-off final against Kilmarnock whilst defeat would mean at least one more season in the Championship and Head Coach Alan Stubbs believes that the fact that his players recent experience of high-pressured games will prove to be the deciding factor.

Hibs also have the chance to finally end the 114 year Scottish Cup hoodoo when they face Rangers next Saturday, but all thoughts of that have been put on a back burner as they prepare to take on the Bairns.

Stubbs said: “We are entering the stage now where they are high-pressure games. Whichever way you want to look at it, there is a lot riding on them and they do have an increased element of pressure.

“The fact that we have played in some big games recently will certainly help the players to cope with the emotions that will be running high before and during the game.”

Hibs’ task should have been a lot easier but for an incredible refereeing decision by Alan Muir in the first leg on Tuesday night.  With Hibs 2-1 up and pushing forward, David McCracken clearly handled the ball twice in the penalty area then Aaron Muirhead kicked Liam Henderson in the aftermath.

A penalty at that time could have ended the fixture as a contest but Muir’s lack of action cost Hibs dearly when they conceded a late goal to make the score 2-2.

After the game Falkirk boss Peter Houston insisted that he had not seen the incident but if it had been a penalty then it made up for a controversial spot kick awarded to Hibs against Falkirk in November. He also claimed that such decisions even themselves over the course of a season.

When quizzed about Peter Houston’s opinion, Stubbs said: “I wish !!!!  It’s not as easy as that unfortunately. I think people say it but try telling that to a manager who’s not had them given to him.

“If that’s Peter’s opinion then so be it. It has gone and if you feel injustice that can lead you into false pretences. It has happened and it is gone but if anybody feels that was not a penalty then they shouldn’t be doing their job.

“You don’t want to know the kind of messages I have received from people in the game. For anybody who thinks it is not a penalty is making themselves look stupid and very silly.

“It is a topic the day after but we have not spoken one word about it since early Wednesday morning. It has gone and it is all about what we do on Friday night. We have 90 or 120 minutes to win the game.

“No matter what would have happened the mentality is still the same whether we would have won, drawn the game as we did or lost.“Our approach will not change and we will go there and try and win the game.”

Houston also stated that his players would be practicing penalty kicks in case the game ends up all square and Stubbs revealed that he has already selected the players who will take them although he would not be drawn on whether Jason Cummings was on that list.

He did however insists that there would be no repeat of Cummings’ antics in the Scottish cup semi-final against Dundee United at Hampden when his ‘Panenka-style’ penalty chip floated over the bar.

Stubbs continued: “If it goes to penalties we know who is going to take them.

“Just because somebody does not volunteer to take a penalty should not be a judgement of somebody’s character. I have seen players who people think I can’t believe he hasn’t taken a penalty.

“Initially I had seven or eight guys step forward and say that they wanted to take a penalty.

“Jason certainly was one of the volunteers although a few jumped in before him to say they would take one.

“When we spoke about it he was ready to take one and I would let him take it.

“He could be on penalties against Falkirk and then again might not be. I can assure you if he is on penalty duty he will not be chipping the goalkeeper.

‘You can go out and try and replicate penalties and out them out on to the pitch in that situation but it doesn’t prepare them for it unless I can get 6,000 fans into the training ground and even then I can’t replicate the boos and the jeers.”