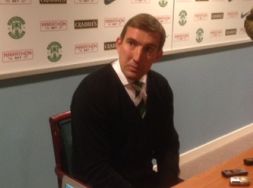 Hibs’ Head Coach Alan Stubbs insists that his first priority will be to win the game against Queen of the South on Sunday and not worry about goal difference.

Hibs sit in third place in the Championship, level on points with Falkirk but with a three goal deficit.

That could have been less but for an excellent performance from Dumbarton’s keeper Jamie Ewings who produced an outstanding performance in last night’s 4-0 victory.

Ewings made exceptional saves from Anthony Stokes Liam Henderson, Martin Boyle and James Keatings as Stubbs kept to his promise of all out attack.

The result means that Hibs must score a minimum of four goals against the Doonhamers if Falkirk secure a win over Morton. If however there is a three goal swing in Hibs favour, both teams will have an identical goal difference with the same number of goals scored This will mean that second place will be decided on a ‘head to head’ basis which will end in Hibs’ favour.

After the game Stubbs said: “We’ve scored four and if it wasn’t for their keeper it could have been seven. If that’s anyone else you were probably lauding the performance. I was quite relaxed with it because I knew we would create chances and I knew Dumbarton would tire but their keeper really kept the score-line down to four.”

“We’ve certainly got a fighting chance, but the most important thing is we’ve got to make sure we win on Sunday first, because I think we’ve both got difficult games.

“There’s a lot of people looking at the goal difference but the most important thing is you win the game first.”

“But all I’m thinking about, firstly, is performing as well as we have tonight on Sunday and if we do we’ll have a good chance of getting a result.”