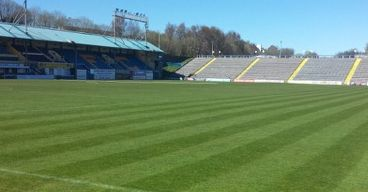 Hibs must now rely on help from others to secure second place in the Championship after a scrappy  0-0 draw with Morton at Cappielow this afternoon.

The Easter Road side now sit two points behind Falkirk with two games remaining for both teams,meaning that Hibs must rely on Raith Rovers tonight or Morton next week to take points off the Bairns.

Head Coach Alan Stubbs made one change to the starting XI that defeated Rangers in midweek with Liam Henderson replacing John McGinn in midfield. Once again, Stubbs only listed six substitutes with Danny Handling replacing Chris Dagnall who has a back niggle, on the bench.

After a scrappy opening, Henderson did well to create a shooting opportunity for himself  but he mishit his effort and the danger was cleared.

Mark Oxley then did well to palm away a long range Mark Russell effort before Fraser Fyvie set up Henderson who lifted the ball over the Morton keeper Derek Galston but unfortunately for the on-loan midfielder his effort just cleared the crossbar.

In the 24th minute Anthony Stokes tried an ambitious first time effort from the edge of the area but his shot was easily gathered by Galston.

Hibs suffered another scare in the 40th minute when Barr sent in an inch perfect cross and Declan McManus should have done better with a free header.

Hibs started the second half strongly and created an early chance following some good interplay between Stokes and David Gray however Morton managed to clear the danger.

Fraser Fyvie then set up Cummings but his effort actually left the stadium and a minute later Stokes effort from the edge of the box produced a fine save from Galston who tipped the ball just over the bar.

Cummings had the ball in the Morton net but his effort was ruled out for offside, a decision which upset several Hibs’ players.

Morton then broke away and Niklas Gunnarsson missed a cross ball and Bobby Ball pounced. His effort beat Oxley however rebounded off the post and the Hibs’ keeper produced a brave save to prevent Denny Johnstone from opening the scoring.

Stubbs made a double substitution with McGinn and Martin Boyle replacing Gunnarsson and Marvin Bartley as Hibs threw everything into attack.

McGinn was in action immediately but his strike from the edge of the area flew just over the bar.

With eight minutes remaining James Keatings replaced Henderson then Fyvie was booked for a late challenge on Thomas O’Ware.

With time running out Stokes picked up the ball in midfield and surged into the box but he was surrounded by three defenders and could not get his shot away.