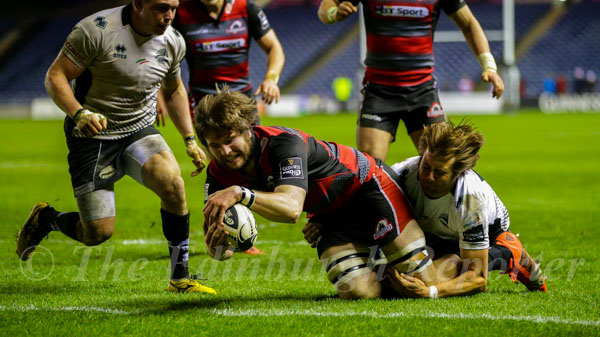 Bonus point for Edinburgh as they whitewash Zebre at home. With four matches left to play before the play-offs and European qualification positions are decided, Edinburgh had to take advantage of Zebre’s position in the PRO12 table and come away with five match points from Friday’s game at BT Murrayfield. However, at half time, it wasn’t looking too good….

The first half was the perfect half of rugby to watch if you were a big fan of the lost ball and the scrum.

New man, Jason Tovey, opened the scoring – once Edinburgh had weathered an Italian assault on their line – after 15 minutes with a penalty from nigh-on half way to give Edinburgh a 3-0 lead.

Seven minutes later, following a series of rucks in the 22, centre Phil Burleigh, collected the ball of the floor near the five metre line, juggled it for a moment, got the pass away to his fellow centre, Mike Allen who went over the line in a tangle of bodies. Referee, Leighton Hodges, went to the TMO for a decision and the replay showed that the ball hadn’t been grounded, so ‘No Try’.

Apart from an intervening bout of fisticuffs near the touch line, the remainder of the half was fairly uneventful, but, as the clock marched toward 40 minutes, Zebre’s prop, Oliviero Fabiani crossed the line from a pile of bodies. Once again, under protest from Edinburgh players, Hodges went upstairs and, again, the score was ruled out, this time for obstruction. So, 3-0 at the break meant that Edinburgh’s mountain had grown a little in their quest for a bonus point and the win alone looked to be the final goal.

With just over 10 minutes of the second half played, Edinburgh scored the first try of the match. No. 21,Sam Hidalgo-Clyne, choose to kick through from near half way and send wing, Damien Hoyland on his way. Hoyland, who has to be one of the fastest players in the league, won the foot race with Zebre’s flanker, Jean Cook, to the ball and kicked on, following through and over the line to dive on the ball and score his seventh try of the season for the home side. Tovey, then slotted the kick home for a 10-0 lead.

Just over five minutes later, Hoyland scored again. This time he was a bit closer to the line, and, following a series of rucks from a line out across the front of the goal area, Hidalgo-Clyne reversed the direction of play and Hoyland went over in the corner for the score. Tovey then scored the considerably more difficult kick and it was, suddenly 17-0.

Zebre were now coming under immense pressure from the home side and were struggling to leave their own territory and, with 68 minutes played, they lost their third try. Starting from inside the opposition half, a fine set of passing and running saw No. 16, Stuart McInally making a break through the defence. He was tackled short, but quick recycle ball left Hidalgo-Clyne with a yawning gap to sail through and perform a spectacular dive to score behind the posts. Once again, Tovey was on target and, at 24-0, the bonus point looked on. The nail-biting fans had to wait until the match was well into overtime before they could relax again. Once again, the home side were bashing away at the Zebre line, and with the clock showing 80 minutes, a couple of penalties in quick succession caught the defence napping and the ball was fired from one side of the pitch to the other, ending up with No. 19, Alex Toolis, who had a five metre run in to cross in the corner for the fourth – and bonus point – try and, what turned out to be, the final score of 29-0. Tovey then missed his first kick of the night, but he had done enough to earn his Man-of-the-Match award and do his bit to help Edinburgh on their way to a top six finish to the season.