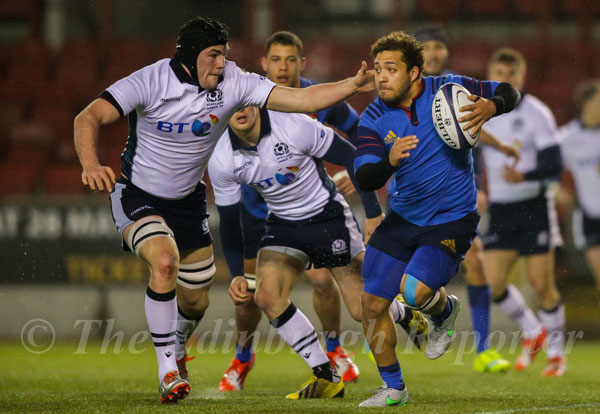 U20’s make it a brace for the French France’s U20 side followed on from the example set by their Women’s team to score a fairly comprehensive win over their Scottish counterparts at Broadwood Stadium on Friday.

Coming into the match on two wins apiece, this one could determine who was top of the table by the night’s end.

It started badly for the home side as France went on the attack from the off and play was quickly established in the Scots’ 22. Winning a scrum from a lineout, the French men repeated what the women had done and destroyed the Scottish scrum, once again, giving a referee no option but to award a penalty try. Stand-off, Anthony Belleau, then knocked over the conversion for the7-0 lead after four minutes.

Scotland then enjoyed a period of possession and attack, with prop, Zander Fagarson making inroads into the French half. The home side were then awarded with a penalty in the 11th minute which stand-off, Adam Hastings, slotted home to bring the score to 7-3.

During a period of play largely confined to the middle of the pitch, Scotland were awarded a couple of penalties, which Hastings kicked to touch, but, with nothing coming from the advantage, the third penalty award was, successfully, sent over the posts for a 23 minute score line of 7-6. Three minutes later, it was try-time. From the restart, Scotland made inroads into the French 22 and a penalty lineout close in, gave Scotland a chance to attack the line for the first time. A series of rucks in the five metre zone then kept the French defence sufficiently occupied to allow wing, Ben Robbins to break round the outside of the pile of bodies to dive over for the try. Hastings missed the conversion, but Scotland were now in the lead at 11-7 after 27 minutes.

France then came back to within a point with a penalty from Belleau on 35 minutes before, once again, retaking the lead with a TMO determined try. Scotland ‘handed over’ possession deep in the French 22 and the breakout was lead by Belleau. Some fine handling then got the French up into the Scotland 22 and threatening the line. As play went into the breakdown near the Scots’ line, the left side of the pitch was almost devoid of players, apart from France’s wing, Martin Leveau. A deft kick over to his side of the pitch bounced well for the Frenchman and all he had to do was fall on the ball to score. A quick TMO check for offside then ruled the score good and it was 15-11 to France. Belleau’s conversion was also good so that made it 17-1l.

Then it was a 17-14 scoreline as, right on 40 minutes, Scotland won a penalty which Hastings kicked to take the match into the break.

An early second half kicking exchange went the way of the visitors and they launched an attack down the left through their bandaged No. 9, Antoine Dupont. He made a lot of ground before handing the ball over. A couple of passes later and, ending a move started from just outside their 22, France’s No. 12, Damien Penaud went over in the left corner for the try. With Belleau’s boot on fire, he scored the conversion to make it 24-14 to the French.

With the match approaching the hour mark, Scotland won a couple of penalties which lead to nowhere, but the last of these, for taking a player out in the air, saw a yellow card for France and Hastings’ sent his kick sailing over the touch line near to the French five metre line. Scotland then won the line out and set up a rolling maul, which the French couldn’t stop. Nearing the whitewash, flanker, Matt Smith, slid off the end of the line to dive over for Scotland’s second try and 24-19. Hastings once again scored with the conversion and Scotland pulled up to within a score at 24-21.

Scotland then dominated the next period of play, but it was the French who scored next. Eventually forcing their way into Scotland’s 22, the visitors forced a clearing kick off the back of a ruck, but this was charged down and, in the ensuing confusion, Judicael Cancoriet picked up the loose ball and charged over for the try. Belleau then scored the conversion to take the score, with less than 10 minutes left, to 31-21.

Once again, from the kick-off, Scotland pressurised the French defence for a period, but they were repulsed time after time before another break out on 78 minutes gave the French the final score of the match with another TMO-decided try. Belleau missed the kick, but with the try, the final score stood at 36-21 to France and gave the visitors a double on the night.