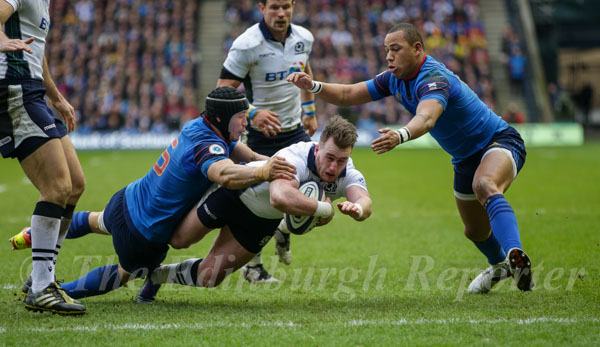 Scotland overcame their underdog status to put in a fine performance on their way to their win over France in this year’s RBS 6 Nations.

This was the home side’s first back-to-back win in for… oh, ages in the Tournament and their first win over France since 2006 when ‘BT Murrayfield’ was just plain ‘Murrayfield’.

Coming off the back of that win against Italy, Scots tails were up, but France can never be discounted and it was to prove a typically exciting encounter between the two Nations.

It was looking like business as usual as the French scored within four minutes of the start. Losing early possession in the French half, Scotland were caught napping and a move which started inside their 10 metre line progressed upfield through several offloads which kept up the momentum. The final pass came from wing, Wesley Fofana, who put hooker, Guilhem Guirado in the clear to touch down. Francois Trinh-Duc missed the conversion, but the visitors were ahead 5-0. He then missed another attempt at goal a couple of minutes later from a penalty attempt.

The match settled down for a few minutes then Scotland won the ball from a turnover in the middle of the pitch and the pack went to work, taking play back into the French half. A neat kick through from 22 Peter Horne – on to replace the concussed Finn Russell – was gathered by the French, but the referee, Glen Jackson, pulled play back for a penalty for a ruck infringement. Greg Laidlaw, playing in his 50th International, slotted the easy kick home to put points on the board at 5-3 after 15 minutes.

Scotland dominated lay for the next few minutes and, with 21 minutes on the clock, they won another penalty, this time from a scrum. Laidlaw’s kick was, once again, successful and the Scots were ahead 6-5.

Another scrum penalty came Scotland’s way, deep in their own half and full back, Stuart Hogg used his enormous kicking ability to send the ball into France’s 22 for a lineout. Scotland then put huge pressure on the visitors’ defence and, through a series of rucks and well worked passing moves, almost got No. 4, Richie Gray, under the posts. Quick recycle ball from here was whipped out to Hogg and, a neat sidestep later he was between two defenders and over for a try. Laidlaw then missed the relatively easy kick, but Scotland were ahead after 32 minutes. Four minutes later, they were over the whitewash again. A quick tap penalty near halfway was taken by returning centre, Duncan Taylor, and he sprinted down the line to dive over, aided by Peter Horne, in the right corner. Jackson had a wee look on the big screen as there was a suspicion of a player being pulled back by Laidlaw, but he quickly dismissed the idea of a prop being able to catch the flying Taylor and awarded the try. Laidlaw scored with a difficult kick and Scotland were ahead 18-5 with four minutes left in the half.

And it was a costly six minutes(!) as France came back with a vengeance and pinned the home side back in their 22. They almost broke through the line of defence several times before a long pass out to centre, Gael Fickou who powered through to go over in the 42nd minute. Trinh-Duc then emulated Laidlaw’s touchline conversion and the teams went into the break at 18-12 to Scotland.

The first period of play in the second half was fairly evenly divided, but was played mostly in the Scots’ half. Then, with six minutes played. France gave away another scrum penalty five metres inside Scotland’s half. Hogg decided to give it a go and belted the ball 55+ metres and over the bar for the three points and a 21-12 lead.

France came back at the Scots and, once again, the match reversed into the home half of the pitch. However, they made little progress and had to be content with a penalty on 51 minutes which scrum half, Maxime Machenaud kicked to close the gap back to six points at 21-15.

Then France upped the ante and squeezed Scotland back into their 22, forcing several last-ditch tackles, one of which was a bit too last-ditch and France were awarded the penalty. They went for the line, but the subsequent play ended in a try-line ruck, which was penalised again. Their second lineout follow up ended in them losing possession and Laidlaw clearing to touch. They were soon back, but had to settle for a, successful, attempt at goal from Machenaud who closed the gap again to three points at 21-18. Scotland successfully defended another assault from the visitors and made progress up to the other end, where, with 66 minutes played, a long, looping pass from Laidlaw was tapped on by, eventual Man-of-the-Match, Hogg over his head into the waiting arms of Tim Visser. He then dived over in the corner for his 11th Scotland try and 26 points. Laidlaw missed his kick, but with 13 minutes left, Scotland had a two-score lead at 26-18.

The scrums then degenerated into farce and Jackson spent the best part of five minutes resetting before giving in and awarding a free kick to Scotland.

With just over five minutes left, yet another scrum penalty gave Laidlaw the chance to put the game out of sight and the Gloucester man did just that and 29-18 it was.

France then put enormous pressure on the Scottish try line, crossing for a touch down, which was wiped off for a forward pass, but winning a penalty. They went for the scrum, but Scotland end up with the ball and, with 81 minutes on the clock, another collapsed scrum penalty in favour of Scotland sees the home side over the line with a fantastic 29-18 win over the visitors from across La Manche.

This was a brilliant performance from the Scots, with a lower than has been ‘usual’ penalty count, and with more incisive and strung together play, which bodes well for the future under Verne Cotter. The – tongue in cheek (my dad’s English – JLP) – ‘downside’ is that Scotland’s win means that England take home the RBS 6 Nations Trophy before the final round next week and here’s hoping that Scotland can continue the good form and beat the Irish in Dublin. And, given France’s performance, England should do the business over them in Paris as it’s certain to feel better being presented with the trophy following a win.