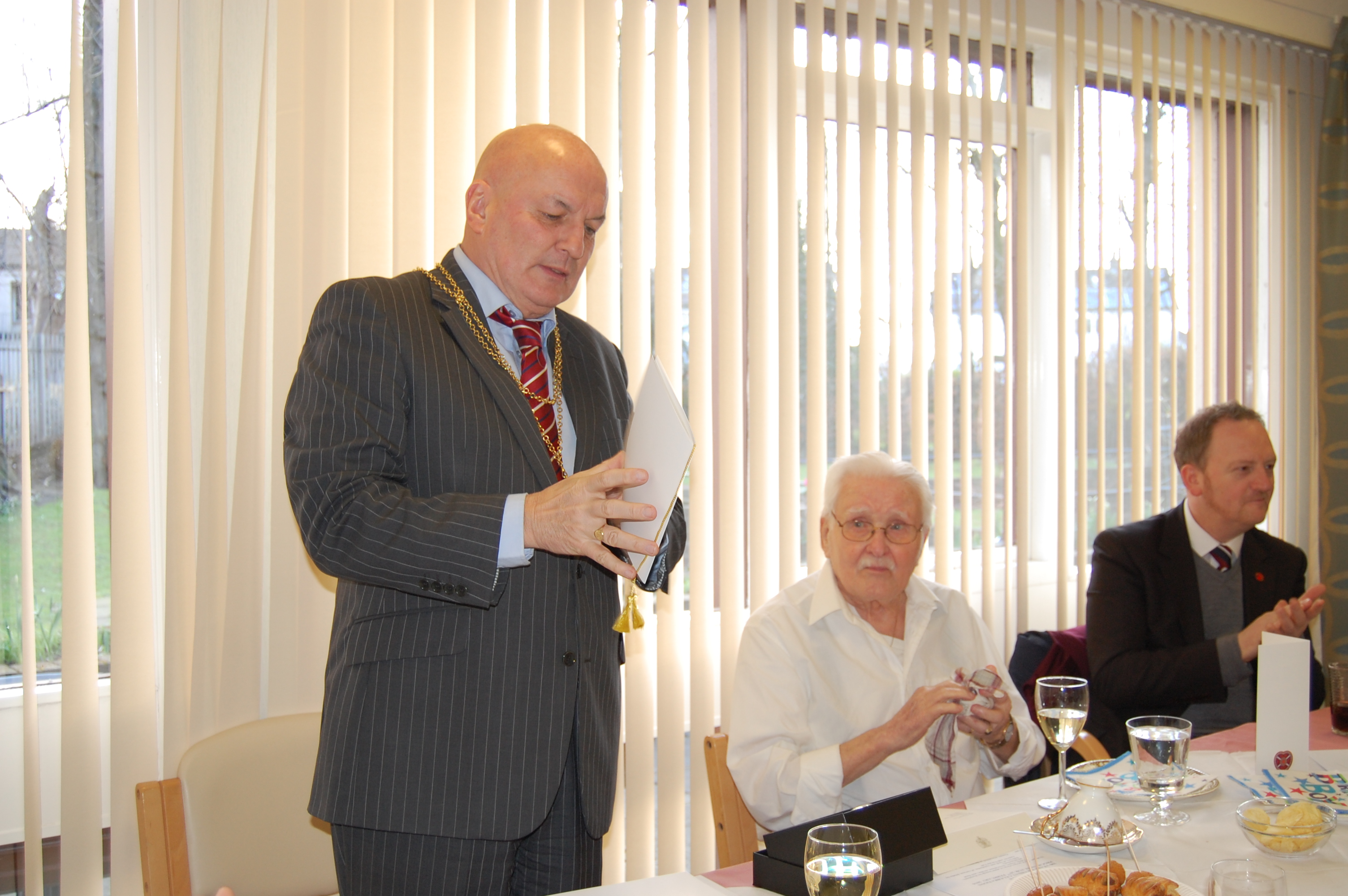 Tommy Low who lives in the Bield home at Corstorphine celebrated his 100th birthday earlier this week, and he had a party with other residents and his friends to celebrate.

The Deputy Lord Provost Cllr Steve Cardownie visited him to hand over the official greeting from HM The Queen.

Tommy was brought up on the High Street Portobello, the only son of Edward Daly Low and Agnes Kirkwood. He left Portobello High School at the age of 14 and went to work in a foundry operating a steam hammer.

He recalls fondly the open air pool at Portobello with the artificial waves every hour. He can also remember the coal fired power station being built which then cooled sea water diverted into the pool.

He later worked with SMT as an apprentice bus mechanic. He and an experienced mechanic could dismantle a bus engine, overhaul it and replace it in one day. He later transferred to the SMT garage at Roseburn which sold cars, camper vans and lorries.

He met his wife, Raye at Xmas 1938 and they married on 5 October 1940. Although he was initially called up during WWII his orders were later cancelled and he had to return the Queen’s Shilling. He was transferred to Manchester to supervise manufacture of machine parts for Royal Naval submarines. Apparently Raye was a determined lady and she joined him two weeks later. He looked after eight women working on producing the machine parts.

(He apparently likes women’s company which made this a really enjoyable time!)

After WWII ended the Lows returned to Edinburgh working in Rankins Fruit Market at the West End, and a newsagent shop that they bought in Morningside. Tommy then became a golf club steward, a chauffeur for the MD of Scottish & Newcastle and then the couple ran The Doctors pub near the old Royal Infirmary Edinburgh.

Tommy and his wife lived in various parts of Edinburgh before both going to live at the Bield Home as original tenants.  Raye was deaf, and to improve communications between them Tommy began computer lessons with Andrew Tait when he was over 80. Andrew said: “He was a good computer student despite being a Hearts supporter and he progressed well, and we even considered developing a family tree.”

Sadly Raye died just a few months before their 70th wedding anniversary, and since they had no children Tommy has no direct living relatives from his side of the family except his cousin Dorothy on his mother’s side who lives in Falkirk and keeps in touch with him.

Andrew Tait concluded: “His character still remains in that if he goes into the lounge at the Bields Home, he will invariably join the ladies for a chat instead of the men. The ladies love his company; the men continue with their dominoes.

In summary, Tommy has had an eventful life and to date one that he feels has been good to him. He had a good apprenticeship, a very good marriage for almost 70 years, a good war (it could have been much worse), and overall a very good life.”