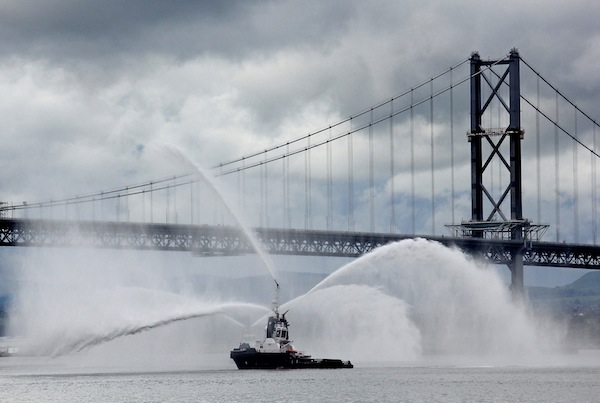 Two missing stand-up paddle boarders were rescued from the River Forth near Portobello on Wednesday.

RNLI lifeboats from Queensferry and Kinghorn, along with Fisherrow Coastguard Rescue Team and a Royal Navy Sea King helicopter from HMS Gannet at Prestwick, were tasked to search a large area of the Forth, off Portobello, for two stand-up paddle boarders who had become blown offshore by a strengthening southerly wind. The alarm was raised via mobile phone, by one of the casualties, around 11.30am.

After a search lasting around 90 minutes, the two female casualties thought to be in their 50s, were located approximately 5 miles north east of Portobello by the Royal Navy helicopter, Rescue 177. The two casualties were then recovered by Kinghorn and Queensferry lifeboats before being winched into the helicopter to be taken to hospital for assessment.

Kinghorn lifeboat helmsman, Neil Chalmers said, ‘This was a good example of team work between the various search assets. Queensferry lifeboat was initially tasked to search off Joppa, but once on-scene, the poor search conditions led to the request for Kinghorn lifeboat and the Royal Navy helicopter to assist.

‘Conditions in the search area were difficult, with a Force 4 southerly wind creating waves up to 1.2m high, along with spray and a strong sunlight.

‘Soon after the arrival of the helicopter, the two females were located with their boards. The helicopter crew requested the two lifeboats to assist with recovering the casualties and their boards, before assessing them.

‘Following initial assessment, both casualties were found to be very cold, and in the early stages of hypothermia, so the decision was made to recover them both to the helicopter for rapid evacuation to hospital. Both were winched from Kinghorn lifeboat, and flown directly to Edinburgh Royal Infirmary.

‘This callout had a successful outcome today, and the regular training sessions which the lifeboats and helicopter crews undertake certainly paid off.

‘The two casualties were reasonably well equipped, but we would always recommend taking a handheld VHF radio, rather than relying on a mobile phone, and checking the weather forecast before participating in water sports like this.

‘The RNLI is currently running a campaign called ‘Respect the Water’ to raise awareness of coastal risks, and reduce the number of fatalities around the coast of the UK and Ireland. In 2013, RNLI lifeboats launched 305 times to kayakers and canoeists.’