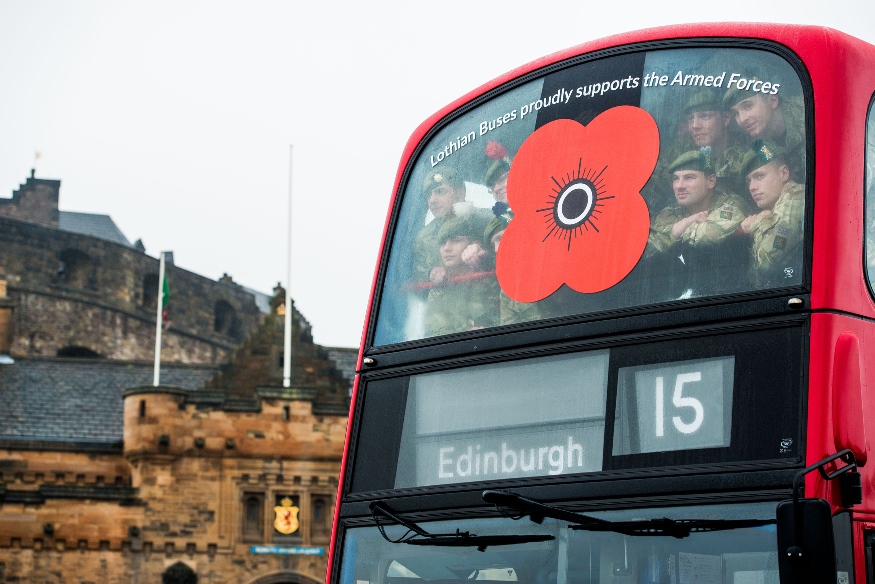 It has been painted poppy red and adorned with poppy designs. It also has the messages ‘We Will Remember Them’ and “Lest We Forget’ emblazoned on either side.

The bespoke vehicle was revealed on Wednesday 4 November at Edinburgh Castle with the support of battalion members of The Royal Regiment of Scotland and ex-military members of staff at Lothian Buses.

Lt Col Charlie Platt, of The Royal Regiment of Scotland, said: “Hopefully everyone who sees and travels in this bus will remember the service and sacrifice of those men and women who have given their lives in defence of the country.

“The infantrymen of The Royal Regiment of Scotland will be supporting Remembrance events wherever we can, in the Lothians and beyond, and are proud to stand alongside veterans and the civilian community in support of Poppy Scotland.”

As well as the specially created ‘Poppy Bus’, which will run on various routes throughout the city during November, each vehicle in the Lothian Buses fleet will be decorated with poppy glass stickers and support messages for Poppy Scotland.

Sarah Boyd, Head of Operations for Lothian Buses, said: “We have many ex-forces personnel working here at Lothian Buses and there is a big military presence here in Edinburgh, many of whom are our customers.

“The Poppy Scotland Appeal is very close to our hearts and one the company feels is important to mark.  We hope that the people of Edinburgh find our special bus to be a fitting tribute.”

Lothian Buses will be collecting for Poppy Scotland throughout November with collection tins in its Travelshops, Park & Ride sites and depots.

The artwork production has been gifted by Exterion, who manage the advertising space on the Lothian Buses fleet with Lothian Buses donating the costs to the Poppy Scotland Appeal.