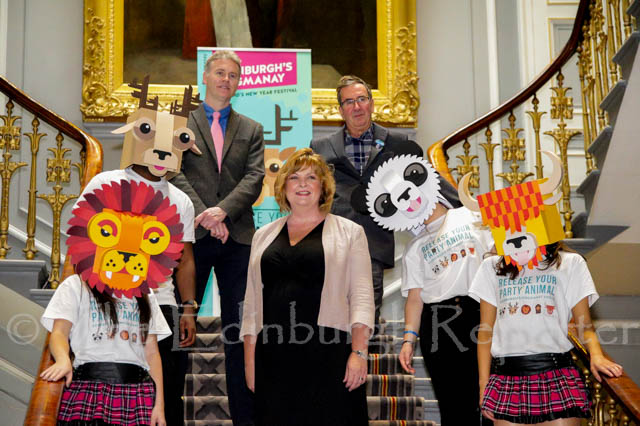 Tickets are now on sale for the Edinburgh’s Hogmanay Street Party and other events at the end of the year as announced  at a press launch earlier today.

You are invited to ‘Release your Party Animal’ and certainly there was an animal face mask in the goody bag which we were all given before leaving. This is billed as the best New Year’s Party on the planet, and certainly it has lots to persuade you that this will be the case.

Biffy Clyro will headline the flagship concert in Princes Street but events will also expand to the Old Town. And the organisers have yet to announce the plans for Scot:Lands the free events for the whole family on New Year’s Day.  Pete Irvine said they are just finalising the programme at the moment. In other cities in Scotland things are closed, but Edinburgh is buzzing!”

Pete Irvine said:  “This year it really is bigger as the festivities are expanding to the Old Town around the Cathedral with a big ceilidh here.”

At 11:00pm you will have a chance of taking part in a Guinness World Record attempt to stage the World’s Longest Strip the Willow. The city already holds the record, but now everyone is invited to put their kilts on and get dancing.

Irvine continued: “There is to be a new stage called the Castle Stage where Scottish Celtic crossover bands Rura, Peatbog Faeries and Shoogelenifty will perform.”

The whole Street Party will be set to a funk and soul soundtrack from BBC 6 Music’s Craig Charles who presents his Funk n’ Soul Show alongside Edinburgh’s own Simon Hodge.

Councillor Richard Lewis said:”This is the festival we have managed to export to the rest of the world. It is great fun and it is alsoa big investment into the city’s economy. While the council has some competing priorities for its budget every single councillor knows how important this Festival is to the capital.”

The social media campaign #Blogmanay returns to showcase the unique experience of Edinburgh’s Hogmanay while using the festival as a gateway to explore and discover the delights of visiting Scotland, ‘the home of Hogmanay’ in winter. There will be a huge bank of live digital content produced by guest bloggers joining #Blogmanay from across the world.

Tickets for Edinburgh’s Hogmanay Concert in the Gardens are already sold-out.

Tickets for the world famous Street Party, The Old Town Ceilidh, and pre-booked Torches for the Torchlight Procession, are on sale now from www.edinburghshogmanay.com, by calling Edinburgh’s Hogmanay Box Office on 0844 573 8455 or by calling into the Hogmanay Box Office at The Fringe Office, 180 High Street, Edinburgh. Street Party tickets are priced at £25.00 (including booking fee).

Old Town Ceilidh Tickets are priced at £45.00 (including Booking Fee).  Torches for the Torchlight procession can be pre-booked (priced at £10.00) and registration for the Stoats Loony Dook is also open (£10.00 including booking fee and 10% donation to the South Queensferry branch of the RNLI).

Photos by the lovely John Preece!