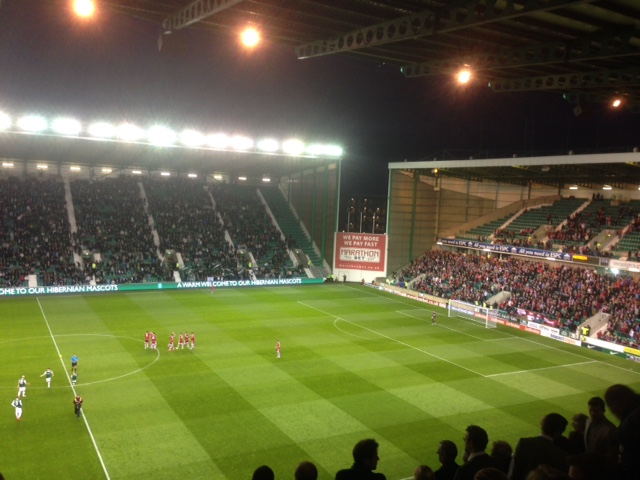 Head Coach Alan Stubbs made two changes from the side that defeated Livingston at the weekend to accommodate a change in formations from 4-4-2 to 3-5-2.  Martin Boyle and Darren McGregor replaced Marvin Bartley and Malonga who were both listed as substitutes.

Aberdeen who easily beat Hearts on Sunday at Tynecastle brought back top scorer Adam Rooney to play alongside David Goodwillie ip front. Ash Taylor also replaced Paul Quinn and Willo Flood returned to the starting line up for the Dons who had won their previous seven league games,

Hibs started brightly and Liam Henderson’s long ball caused confusion in then ‘Dons defence when goalkeeper Danny Ward’s clearance struck Taylor and rebounded toward his goal but Andrew Considine was on hand to clear the danger.

Aberdeen almost grabbed the opening goal in the 11th minute when   Goodwillie beat the  offside trap only for his shot across goal to be cleared by Paul Hanlon.

Derek McInnes’ side then picked up two injuries in quick succession and both Willo Flood and Graeme Shinne had to leave the field.

Both sides created chances in an end to end first period however neither could provide the breakthrough.

Aberdeen started the second half brightly and should have taken the lead in the 47th minute when Nall McGinn fired in a superb cross that substitute Peter Pawlett headed over from close range. The striker claimed to have been pushed however he found no sympathy from the Hibs’ fans who remembered his retrospective ban for diving after winning a penalty against their favourites at Pittodrie.

Dan Carmichael replaced the impressive Henderson as both clubs went for the victory. Cummings had the fans on their feet with a 50 yard run before being crowded out by the Dons’ defenders.

Hibs eventually grabbed the lead in the 82nd minute when Cummings managed to chest the ball down before firing s sensational shot past  Ward from the edge of the area, sparking jubilant scenes from three sides of the stadium.

Six minutes later Hibs secured the win when Malonga collected the ball in his own half before running 70 yards beating three Aberdeen  challenges and side footing the ball into the corner of the net beyond Ward.

At the final whistle the players left the field to a standing ovation with ‘Sunshine on Leith’ blaring from the public address system.