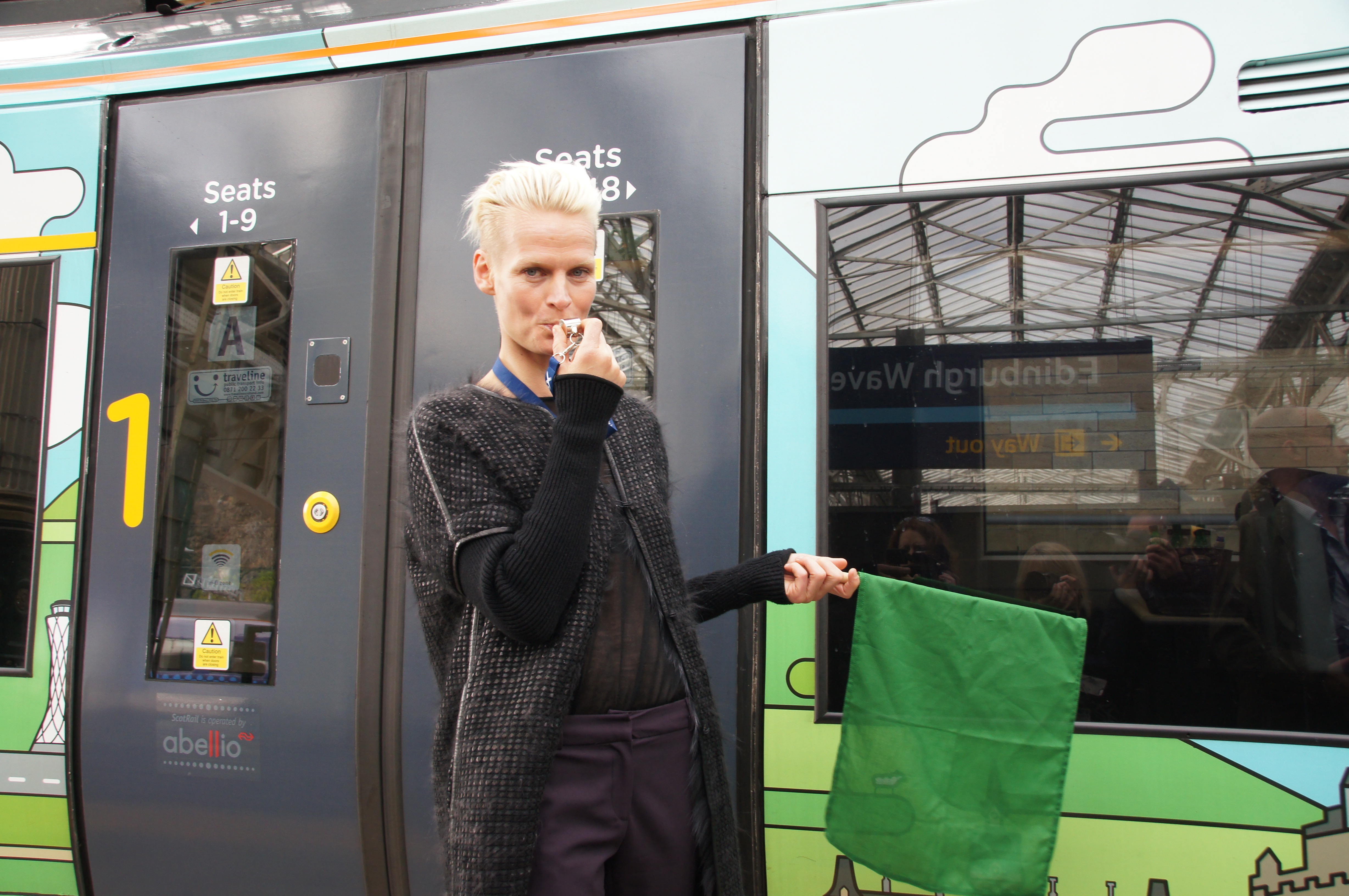 It was a railway that transformed the Scottish Borders into a globally renowned centre for wool and textile manufacture, and now the scheduled services are set to begin on the new Borders Railway on Sunday 6 September 2015.

Dressed in the materials that made the region and railway famous, Ms Freemantle swapped the catwalk for the platform at Waverley Station in Edinburgh today to herald the start of a week-long celebration of the opening of this, the longest domestic railway to open in the UK for over a century.

Scotland’s textile industry has customers in over 150 countries across the world, demonstrating the demand for globally recognised fabrics, tartan, cashmere, lace, knitwear, tweed and leather for fashion, interiors and technical uses.  Other famous brands from the Scottish Borders include Lochcarron of Scotland, Johnstons of Elgin and Hawick Cashmere of Scotland.

The Borders Railway will take passengers on a 30 mile, 55 minute journey from Edinburgh through Midlothian to Tweedbank in the Scottish Borders.  The £294m project has taken just over two years to construct and includes ten stations.

It is hoped Scotland’s newest scenic railway will be a popular addition to the country’s tourism portfolio, opening up opportunities for visitors to explore Midlothian’s mining past and the Scottish Borders, an area which has an international reputation for exceptional cycling, beautiful textiles and stunning landscapes, famous for inspiring Sir Walter Scott.

Iconic attractions along the route include Rosslyn Chapel made famous by the DaVinci Code, Abbotsford House – the home of Sir Walter Scott, the popular National Mining Museum Scotland and breathtaking Melrose Abbey. VisitScotland is supporting attractions, accommodation providers, local producers and pubs and restaurants in the vicinity of the Borders Railway in developing news ideas, products and experiences.

The Railway begins tomorrow with a special ‘Golden Ticket’ Day, open only to those with the tickets to prove it, and public services will begin on Sunday 6 September. Next Wednesday 9 September, HM The Queen will officially open the railway with a special steam train trip which also marks the day she becomes Britain’s longest-serving monarch.

The project is being delivered as part of the ‘Borders Railway Blueprint’, that sets out an ambition to fully realise the economic benefits of the Borders Railway, transform tourism opportunities and open up communities in South-East Scotland as new places to live, work, learn, play and grow.

The original Waverley Route ran south from Edinburgh, through Midlothian and the Scottish Borders, to Carlisle. The line was named after a series of novels by Sir Walter Scott and served as an important export channel for both the wool and coal industries of that time.

Anna Freemantle said: “The new Borders Railway will give more direct access to what is in my opinion ‘the textile district’ of the UK which is hugely exciting. The new focus on revival of skill and improving of local manufacturing will be hugely helped by this. As this is a big focus of the Edinburgh International Fashion Festival I’m honoured to be part of the opening of this very special Railway.”