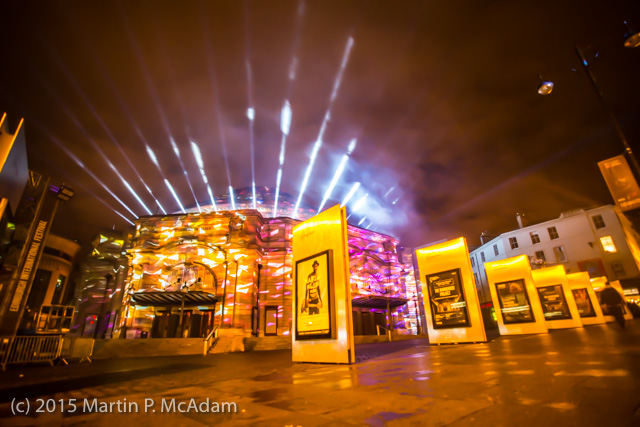 On Wednesday evening anyone on Lothian Road got a sneak preview of the Harmonium Project which will open this year’s Edinburgh International Festival on Friday at 10.30 pm.

It will be more exciting when set to music, but it was a spectacle to behold. And on Friday evening Lothian Road will be closed so there will be no buses stopping in front of the building!

The free outdoor event will celebrate the 50th anniversary of the Edinburgh Festival Chorus and you are promised a light and sound spectacular. One of the most ambitious arts events of 2015, The Harmonium Project  has been created by 59 Productions, the multi-award winning artists behind the video design of the Opening Ceremony of the 2012 London Olympic Games, the record-breaking David Bowie exhibition and the recent Tony Award-winning theatre production An American in Paris.

On Friday evening a recording of John Adams’s mesmerising choral work Harmonium, made especially by the Royal Scottish National Orchestra and Edinburgh Festival Chorus conducted by Peter Oundjian, will be relayed across Festival Square as the façade of Usher Hall is transformed by a series of spectacular projected artworks which will display a digital representation of the experience singing has on the human mind and body.