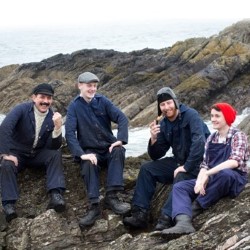 The Edinburgh Reporter’s scoop hound was on the scent at The Pleasance bar the other day as some curious card-sharp playing shenanigans were well under way.

All ears, TER began to take clandestine notes and later confronted the dealer, playwright, Jeffrey Mayhew, with a kiss and tell exclusive Q&A.

TER. The cast seemed somewhat conspicuous in the bar at The Pleasance going through some pre-show card routines. Are you legally wise to shed light on this activity?

JM. Given that, in role at least, they were four drouthy whalers I don’t suppose illegality would have troubled them much… Theatrically they were practising a game of cribbage using a stacked pack.  End on and at a distance they could deal and play any old cards.  In Pleasance Beside the audience can see the hands so they had to be as per the script!

TER. The title of the show has a flavour of continental noir about it. But it is actually set in a whaling cinema. Not a combination you come across too often.

JM. Indeed.  The catcher crews, once down in the antarctic, were there for the season and, if you stayed through till the next season you were very much confined to Leith Harbour (South Georgia) where you would be working on maintenance.  The cinemas (there were more than one!) were an essential part of the leisure time.  The show starts “in the cinema” with the film shown on Christmas Eve 1959 about to begin.  We have detailed records for the period and have the luxury of getting all our references authentic!

TER. Tell us about how you conceived the play and equally intriguing – how you cast it?

JM. Susan Wilson approached me with the core idea for the show.  She had seen my work already (I tend to be a bit research orientated) and proposed that we work on the lives of the Eyemouth whalers, just post war,together.  Her father had been on the whaling so there is a personal journey here for her.  It almost cast itself… Susan had met and seen actors from the area and cast pretty well directly from script to actor – as in, “He will be perfect for…”  To my mind that has turned out to be very successful.

TER. This collaboration with Susan Wilson, was it she who `translated` your original text in to Scots? The whys and wherefores please, a bilingual response would be a TER scoop!

JM. Yes, and much more.  Sometimes I would simply outline what they ought to be saying at a particular point in broad terms and Susan would construct the appropriate dialogue.  She would also point to areas where my draft would not translate comfortably and needed rethinking as well as introducing completely new phrases and elements driven by the established characterisation.  Oh, and she says (over my shoulder), “A didnae ken an awfae lot aboot what ma fither did when he was away frae hame “doon the ice” so a thought a better hae a wee nosey intae what thae whalers got up tae. An’ mind, did a no find oot!”

JM. She adds, “How many times have you heard yourself say, ‘I wish I had asked about that before it was too late’.  Well, that was the situation I found myself in regarding my father’s whaling days after he passed away in June 2000.  My quest to find out more led me to several local men who had whaling connections or first hand experience of life as a whaler.  These interviews proved to be the stimulus I needed to carry on with my research which has now culminated in this project – A Cinema In South Georgia.  As another result of my research, I and the company have built up a close relationship with whalers from all over the world, including  from The Edinburgh Ex-whalers Club in Leith, who have advised and supported us continuously. Their first-hand knowledge has been invaluable.”

TER. You have had the opening performance already  – how did it go? And who won the card game?

JM. I think it went well – a nice and appreciative house and a good, neat show.  Fraser won the card game.  He always will – it’s in the cards.