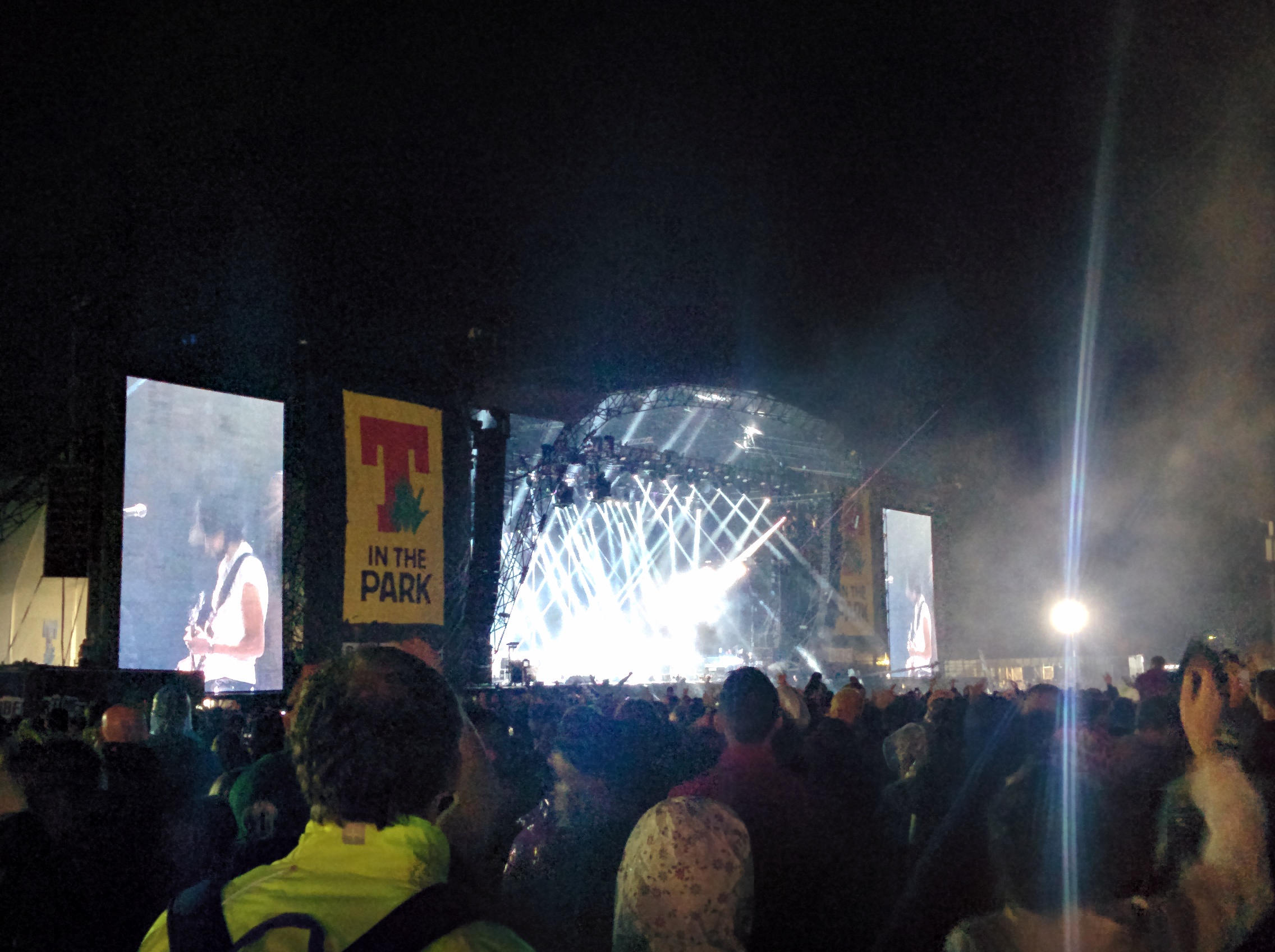 This year for T in the Park will forever be known as the first year it moved to its new home, Strathallan Castle. It’s situated only 20 miles from its old home of 18 years, Balado Airfield, where T in the Park steadily expanded into a worldwide festival phenomenon of three whole days of live music. It has augmented Scotland’s music reputation beyond heights but now Strathallan has a duty to maintain that – but will it?

Now that music at T in the Park starts in the early afternoon on a Friday, every full-timer is worked up that they can’t maximise their weekend ticket. Friday starts with Prides, The Cribs and The Wombats on the main stage, but it’s so easy to miss them in the chaos of preparing for the weekend ahead.

We start with Hozier, a man who is only one album down, and one hit single, ‘Take Me to Church’, which has propelled him to already headline Latitude in his native country of Ireland and appear on the main stage at several other festivals. It’s the natural passion that Hozier has that separates him from other anaemic singer-songwriters. It isn’t pompous or over compensation; it’s honest pop with the soul twang and heartfelt vocals that give him the edge over his competitors. Could the young T in the Park crowd be interested in all of his music? Probably not, but the elation during his final song – predictably hit ‘Take Me to Church’  – is enough to leave Hozier with an overwhelming grin.

Hot Chip had the difficult task of warming up for Fatboy Slim at the King Tut’s Tent – which was due to be a popular one, as he ended up filling the tent well before his stage arrival. It’s easy to say that Hot Chip have been around the block a few times, and it feels as if their most popular track, ‘Over and Over’, was out many moons ago. But one thing the band have always been renowned for is their eclecticism, which certainly didn’t go unnoticed during their euphoric hour-long set.

Their new album, Why Make Sense?, was released to several positive reviews, and you can see why. The new songs bring a new sense of urgency and vigour. But it also shows that Hot Chip still have some relevance, whether they are focusing on maintaining that aspect or not, as they’re certainly knowledgeable in stage charisma, sheer audaciousness and keeping a crowd on their feet.

‘Over and Over’ may have stuck out like a sore thumb slap bang in the middle of the set, but Hot Chip looked to incorporate word-of-mouth jealousy to` those who left after the hit song, as the band finished with a startling, synth-infused rework of Bruce Springsteen’s ‘Dancing in the Dark’.

Usually the Radio 1 stage is laden with massive artists who can play for crowds big that they stretch as far as the eye can see, but someone in the stage organisation managed to make a monumental error in where they placed The War on Drugs. The American band don’t exactly have a massive following in the UK, and for them to be placed prior to David Guetta’s headlining stage set makes the French DJ’s slot look completely wrong. Never has a major stage a festival looked so deserted, as the soft rock band wandered through over an hour of uninspiring, vapid songs as many members of the crowd, presumably waiting for Guetta, muttered: “Who is this band?”

In between acts at T in the Park, people normally see it as an opportunity to grab an alcoholic beverage. But little do people still not know, there are two small stages that sit almost vacant, as if they are nonexistent. The T Break and BBC Introducing stages showcase some of the finest up-and-coming talent in and outwith Scotland.

Hector Bizerk headlined the BBC Introducing Stage, accompanied by an artist who painted up a T in the Park heart as the three-piece combined their localised rap twang with a compelling rhythmic melody. The small crowd at the half-filled tent dug the band, who have made a significant impression on the Edinburgh music scene in the previous year.

Kasabian are becoming T in the Park veterans with 2015 being the third time the band have headlined the festival. As the band near the end of their 48:13 tour, the energetic Leicester bunch decided to end it where they consider a second home.

Set opener ‘Bumblebee’ instantly confirms why Kasabian are continuing to build on their status as a best live act, with a couple of pink flares set off to match the stage design and album cover of their most recent release. Their simple promotion for the album is notorious for Serge Pizzorno’s white T-shirt with one word written on it: this time he wore ‘radge’ as a nod to the Scottish slang word, and ‘buckie’ during the encore for Scotland’s most popular alcoholic beverage.

The band raked through a selection of hits and newer songs, performing a cover of ‘Lust for Life’ and ending with the wonderfully seiged ‘Praise You’ and ‘LSF (Lost Souls Forever)’ combination.