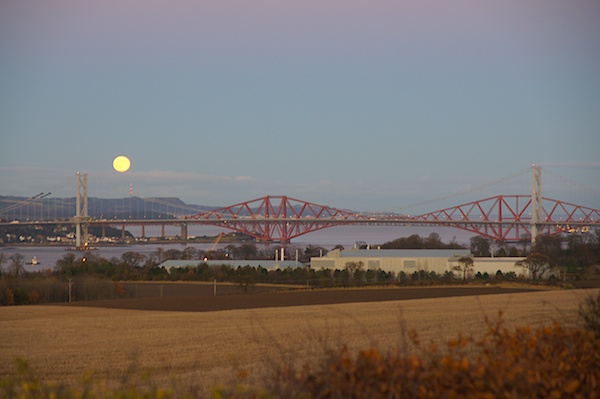 As well as our very own Forth Bridge the World Heritage Committee this morning approved the inscription of four other cultural sites on the World Heritage List: Rjukan-Notodden Industrial Heritage Site in Norway, Speicherstadt and Kontorhaus District with Chilehaus in Germany, Necropolis of Beth She’arim—a Landmark of Jewish Revival in Israel and San Antonio Missions in the United States of America.

Rjukan-Notodden Industrial Heritage Site (Norway)—Located in a dramatic landscape of mountains, waterfalls and river valleys, the site comprises hydroelectric power plants, transmission lines, factories, transport systems and towns. The complex was established by the Norsk-Hydro Company to manufacture artificial fertilizer from nitrogen in the air. It was built to meet the Western world’s growing demand for agricultural production in the early 20th century. The company towns of Rjukan and Notodden show workers’ accommodation and social institutions linked by rail and ferry to ports where the fertilizer was loaded. The Rjukan-Notodden site manifests an exceptional combination of industrial assets and themes associated to the natural landscape. It stands out as an example of a new global industry in the early 20th century.

Speicherstadt and Kontorhaus District with Chilehaus (Germany)—Speicherstadt and the adjacent Kontorhaus district are two densely built urban areas in the centre of the port city of Hamburg. Speicherstadt, originally developed on a group of narrow islands in the Elbe River between 1885 and 1927, was partly rebuilt from 1949 to 1967. It is one of the largest coherent historic ensembles of port warehouses in the world (300,000 m2). It includes 15 very large warehouse blocks as well as six ancillary buildings and a connecting network of short canals. Adjacent to the modernist Chilehaus office building, the Kontorhaus district is an area of over five hectares featuring six very large office complexes built from the 1920s to the 1940s to house port-related businesses. The complex exemplifies the effects of the rapid growth in international trade in the late 19th and early 20th centuries.

Necropolis of Beth She’arim—a Landmark of Jewish Revival (Israel)—Consisting of a series of catacombs, the necropolis developed from the 2nd century BCE as the primary Jewish burial place outside Jerusalem following the failure of the second Jewish revolt against Roman rule. Located southeast of the city of Haifa, these catacombs are a treasury of artworks and inscriptions in Greek, Aramaic and Hebrew. Beth She’arim bears unique testimony to ancient Judaism under the leadership of Rabbi Judah the Patriarch, who is credited with Jewish renewal after 135 CE.

San Antonio Missions (United States of America)—The site encompasses a group of five frontier mission complexes situated along a stretch of the San Antonio River basin in southern Texas, as well as a ranch located 37 kilometres to the south. It includes architectural and archaeological structures, farmlands, residencies, churches and granaries, as well as water distribution systems. The complexes were built by Franciscan missionaries in the 18th century and illustrate the Spanish Crown’s efforts to colonize, evangelize and defend the northern frontier of New Spain. The San Antonio Missions are also an example of the interweaving of Spanish and Coahuiltecan cultures, illustrated by a variety of features, including the decorative elements of churches, which combine Catholic symbols with indigenous designs inspired by nature.

The inscription of sites will continue for the rest of the day and the Committee will end its 39th session on 8 July.