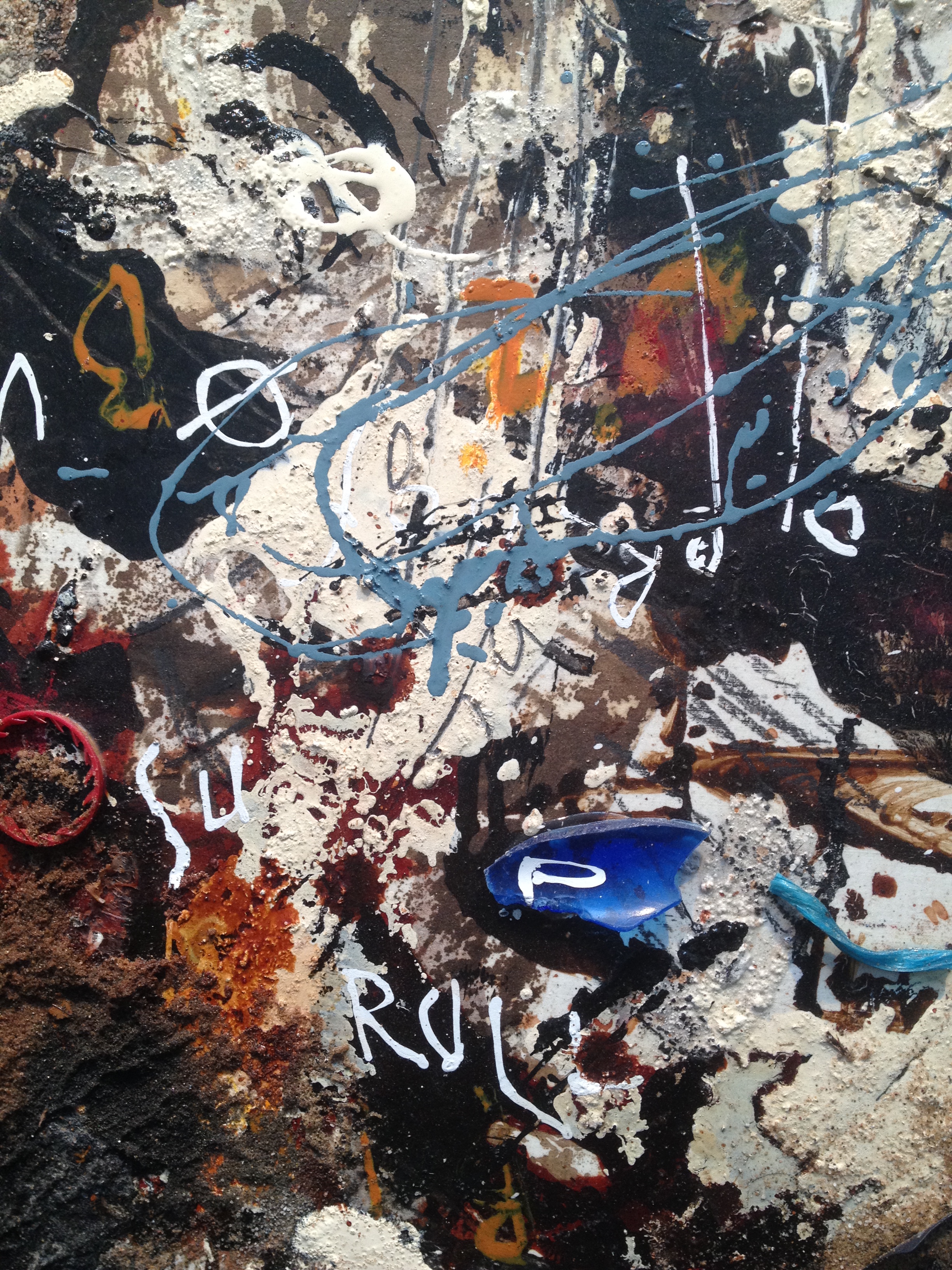 ‘I am interested in the patterns, the indentations, the writing not done by human hand….the glory of the inner workings of the place’.

In a fascinating and illuminating film accompanying this new exhibition, the artist Paul Martin explains the thoughts behind his some of his paintings. He’s been looking, he says, at the nature of nature; what is in it? how is it made up?….what does it mean? He’s interested in the qualities of wind, rain, rocks and seasons, and in depicting these in a non-naturalistic way. What gives a cloud its essence, its being? His most recent work also looks at the mystery and phenomenon of colour in connection with the material qualities of things.

The titular pieces, Seawrack Rising, form a series that follows the changes in the sea as the waters churn and the plants surface, only to disappear again. The series was started on Iona; Martin likes to use found materials in his work, and so he arrived on the island with only a pot of varnish, sourcing his pigments and materials from nature. The first painting is white and cream with small patches of brown; a calm sea but with a hint of coming turbulence; in the second we see more brown as the seawrack starts to rise.

Martin talks of ‘the rhythmic intensity…the vigour of the sea and wind…the detritus of seaweed and shells…the marks..and also the poetry…the coolness of the wind, the sticky sliminess of the weed’. Brown and black dominate the third painting; everything seems to be moving faster. As the seaweed comes to the fore, so also does all manner of detritus – bits of coloured plastic, a tiny model of a figure on a motorbike, shards of glass, old wires, string. Words are half seen; some are indecipherable but ‘ACTION‘ is clearly legible. In the fourth painting, the sea starts to calm again; it is still brown, but there are fewer extraneous objects, just a few squiggles of white. Martin is not making any comment on pollution, on man’s despoliation of the world; the bits and pieces that wash up with the weed are instead evidence (good or bad) of our relationship with nature, ‘further examples of quiddity’ – the essence of the thing, the life within the landscape. As Above, So Below is a painting started in East Lothian; its base is the black sand found on one of the area’s beaches, and this is studded with bottle tops, shells, small bones and rocks – things, Martin explains, that we’re used to ‘looking at but not seeing’. In Sea Swell blue vertical lines suggest the dynamics of the ocean, ‘things more than we see’, the tide patterns, the pull of the moon. ‘Forget about beautiful sunlit expanses of land or sea – think about the elements of geography and geology, and the way that life springs from these cold labels’. The washes of white in Sounds of the Silent Sea convey energy and movement, a feeling of constant change, of waves washing back and forth. And again there are the words, the enigmatic ‘even if it so…’

Another theme in this exhibition is maps. The wonderful Mundi looks at ‘ways of thinking about where we are, locating ourselves, describing our distance from something else’. The reds and browns of the painting are scratched with many words; ‘drift’, ‘oscillation’; more shapes are hidden – tiny birds,the head of a cow or perhaps a dog, a basket, dragonflies. Martin speaks of Yeats’ Byzantium, ‘our distance from something mythical’. A recent visit to Strontian has been the inspiration for several paintings. It is a place whose ‘atmosphere and even sounds were green and deep red and blue’. A place full of legend, history, storylines and traditions. Faerie Road explores the ancient idea of a valley path along which the spirit world travels; black pinhead trees and white clouds  against glorious reds, blues and oranges. In Sig Rerum Martin again seeks the specific essence of the place; the location appears similar but now light streams down through the clouds, the brown hills are lined to reference their geology, numbers and letters appear; Martin is very interested in Plato’s view that ‘a place exists before the thing is made’, and so he strives to create a satisfying painting whilst also conveying the physical and the metaphysical qualities of place. The valley, Martin found, ‘seemed to trap the light’ – a phenomenon he captures in The River and The Corrie.

The Warburton Gallery is a superb place to show these paintings, and also to experience the accompanying music, Orpheus Sings: A Soundscape, a collaboration between Martin and his son Ben, inspired by Martin’s readings of Rilke’s Sonnets to Orpheus, and by the Orpheus myth in general. The sounds, created to reflect the dynamics of our relationship with nature, are at times reminiscent of orca whales calling to one another; Martin describes them as ‘primordial’.

Paul Martin began his studies in the late 1960s; he has exhibited widely all over the world and is the recipient of many awards, including The British Institution Prize for Printmaking and the Royal Academy Awards for Painting and Printmaking. Ben Martin is a percussionist with the group North Atlantic Oscillation.

The Warburton Gallery is a not-for-profit organisation founded with the aim of fostering the imagination, facilitating the creation of new art of the highest quality and enabling artists to experiment and takes risks in their artistic practice. The gallery seeks out interesting, historic or unusual properties that are sitting empty or waiting to be redeveloped and can in the meantime be transformed into high quality exhibition spaces. It is currently housed in the magnificent domed atrium of the India Buildings at the junction of Victoria Street and the George IV Bridge and is open 10.30am-5.30pm Wednesday to Sunday. Stag Espresso (Dovecot) runs the adjacent gallery cafe, which is open 10.30am-5.30pm daily.