A train carriage travels through a wintry landscape. You are the passenger in that carriage, and as you watch the swirling snowflakes from your cosy seat, an unknown voice begins to tell you a story. It’s a story that begins quite simply; the speaker tells of his life on the far north coast, of the wild winds that often caused his home and all its contents to shake…..his voice remains calm and everyday as his words lead you to the shocking climax. The story ends; you sit back – but not in your cinema seat, for you are in the middle of a modern day railway station.

If you’re in Edinburgh this week, take a break from the shopping and head into Waverley. Yes Waverley Station; not the first place that springs to mind perhaps, but from Wednesday to Saturday you will have the chance to lose yourself in another world, as Cryptic presents Homecoming: Station Stories. Acclaimed artist Sven Werner of Outland Productions has spent a month visiting communities across the country, asking people what ‘inspiring Scotland’ means to them and the journeys they have taken; from their responses he has created three short films, cinematic worlds in miniature. The films will be shown via a striking Victorian peepshow; you will be invited to sit on a stool, don headphones and, with a black cloth over your head, experience a story (or all three) by looking through the lens of an antique camera. I tried this out when I came across Sven’s event in Aberdeen last week, and was amazed at how quickly I was drawn in; within seconds I had forgotten about the busy station concourse and was completely absorbed in the story.

Sven (who handcrafted each work himself) and his assistants are all on hand, dressed in appropriate Victorian costume, to tell you more and introduce you to this unusual and enjoyable project. Sven aims to introduce people to magical, poetic worlds, bringing them closer to the stories in their own lives; he uses miniature models in his film and installation works to create an atmospheric intensity. The 5 minutes I spent under the black cloth certainly left a lasting impression – I’m still thinking about the experience a week later. So instead of fighting the crowds in Princes Street, escape for a few minutes to an enchanting world. Station Stories will be at Waverley 11am-7pm Wednesday 10th to Saturday 13th December 2014, and is a free, non-ticketed event for all ages. I recommend it.

Cryptic is an internationally-renowned producing art house aiming to ‘ravish the senses’ with performances that fuse music, sonic art and multi-media. Founded in Scotland in 1994 by Cathie Boyd, Cryptic presents today’s most imaginative international artists and nurtures the creative talent of tomorrow.

Homecoming: Station Stories is part of the Scottish Government’s Homecoming Scotland 2014’s Tales of Home programme, managed by Event Scotland and funded by Creative Scotland in association with ScotRail. 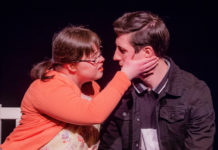