Celtic visit the capital today and their goalkeeper Fraser Forster is determined to keep a clean sheet for the 13th consecutive league game and in doing so beat a 43 year old record.

If the 25-year-old England international can keep a young Gorgie side at bay for the opening 31 minutes, he will have surpassed Bobby Clark’s landmark of 1,155 minutes without conceding a goal back in the 1970-71 season for Aberdeen.

Today the Edinburgh Reporter looks back at the famous game that ended the run.

The game in question took place at Easter Road on Saturday 16 January 1971 when Eddie Turnbull’s Aberdeen side arrived in sparkling form. The Dons had gone fifteen games unbeaten and were locked in a battle with Celtic at the top of the table, whilst Hibs under manager Dave Ewing had not won in their last nine games.

At the time Aberdeen  were Scottish Cup holders having beaten Celtic 3-1 in the final a few months previously and Turnbull had moulded his side into a fine team with quality players such as captain Martin Buchan, Tommy McMillan, Henning Boel, Jim Hermiston, Stevie Murray and Joe Harper.

On the run up to the game, few gave Hibs much chance however the pessimism around Easter Road vanished when Hibs announced the signing of a certain Joe Baker from Sunderland for only £12,000.

Baker had earned legendry status during his previous spell at the club during which time he scored an incredible 141 goals in only 160 games before being sold to Italian giants Torino.Since then he had starred for Arsenal, Nottingham Forest and Sunderland and almost made the England international squad for the 1966 World Cup.

On that cold afternoon, an astonishing 23,402 fans crammed into the stadium to watch the homecoming of the prodigal son who took the field to a standing ovation. To add to the glamour of the occasion, Joe wore distinctive white boots which in those days was unheard of in Scotland and was made captain for the day.

To mark the occasion, the fans even invented a new song to welcome him back. Changing the words of the tune of the hit musical of the time Jesus Christ Superstar, the old ‘Cowshed’ behind the goals echoed to the song ‘Joe Baker – Superstar – How many goals have you scored so far?’

As usual, Hibs started the game playing up the slope towards the Dunbar end, and every Baker touch was greeted with a roar of approval from the terracing.

After a goalless first half Hibs finally broke the deadlock  in 64 minutes although it was another legend who wrote his name into the history books when captain Pat Stanton finally beat Clark with a stunning 18-yard drive which flew into the top left hand corner of the net leaving the Dons’ keeper helpless.

Easter Road erupted in a sea of green and white then four minutes later Baker celebrated his return to Hibs after a 10-year absence by scoring the second with a sensational diving header.

Baker looked to have added a third a short time later but the ‘goal’ was wrongly ruled out for being offside, before  Dave Robb scored for Aberdeen with six minutes left, but it was too little too late although Harper who would later join Hibs, went close in the dying minute.

Joe later recalled the day saying: “It was an incredibly emotional reunion. The reception I got when I ran onto the pitch made me realise just what I had been missing all these years.”

Pat Stanton also has fond memories of that day: “When Joe ran onto the pitch he was wearing white boots which I couldn’t remember any players in Scotland wearing at the time but he showed that he could still play. A lot of players rely on speed and when it goes they’ve not got the technique. Everybody gets old and Joe had been away from Easter Road for a while but he was still quick and allied to his experience, he knew when to use that pace.”

Jimmy O’Rourke said: “I had gone from watching Joe in the stands to playing alongside him. I was trying to think who I could compare him to, but I couldn’t think of anyone except maybe Roy of the Rovers.”

Joe played another 33 times for Hibs during his second spell scoring 17 times before moving to Raith Rovers where he scored an incredible 43 times in 66 games.

Dons’ fans of a certain age still insist that the title would have ended up at Pittodrie that season but for a fire which destroyed part of the stadium leaving a gap which allowed the strong northern wind to blow through which disrupted their style of play.

Whatever the reason, it was their home form that let them down in the run up and Celtic took the title by only two points. 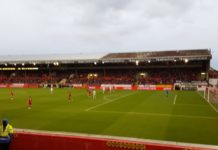 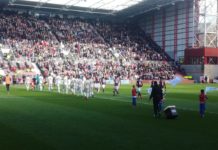 Hearts storm back to defeat Aberdeen 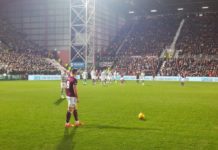