The clocks have gone back and Halloween is over for another year, so now attention turns to the next autumnal event.

The official Edinburgh Bonfire and Fireworks display will be taking place at Meadowbank Sports Centre on the day itself, 5 November 2011 at 6.30pm. Tickets cost £6 and parking is limited at the centre. It is recommended to go on foot, as this also ensures a quick exit when the bangs have fizzled out. The fireworks themselves will light up the sky at 7.30pm.

Hopetoun House, located just outside the city, is renowned for its spectacular fireworks displays. This year promises to be no different, with the event kicking off at 4pm. There will be balloon sculpting, stilt walking, face painting, a performance from The DeLighters fire performers as well as music from the Edinburgh Samba school.  This is all before the fireworks are launched into the sky at 6.30pm, accompanied by the music of Walt Disney’s classic films. Food is to be provided throughout the event, and tickets cost between £6-£10. Free car parking is available on site.

Musselburgh Racecourse is hosting its annual free fireworks event on November 5 2011, with entertainment and fun guaranteed. Radio Forth DJ Grant Stott will be in residence as the fireworks go off to the themed music of ‘movies of the year’. The gates will open at 6pm, with fireworks starting at 8pm.

George Watson’s Rugby Stadium will be holding a Fireworks Extravaganza on Sunday November 6 2011. The event will be raising money for Scottish Love in Action, which is an Edinburgh based charity that cares for destitute children in India. Fireworks will be the main attraction of the night, but there is also to be performances from the prize winning George Watson’s Pipes and Drums, as well as PyroCeltica, who are a locally based fire juggling and drumming team. There will be a hot food stand, to keep everyone warm in the cold November air. Tickets cost £6 and gates open at 5pm.

If the thought of standing outside in the cold night air watching fireworks is not for you, then an alternative to both bonfires and Guy Fawkes night is to celebrate the other major festival at this time of year – Diwali. For Hindus all over the world, the end of October is Diwali, the festival of lights and the start of their new year. It is a time for colours and fireworks, family, food and the triumph of light over darkness. At Suruchi restaurant on Nicolson Street they are holding a Delights of Diwali Festival, and from the 26th of October until the 6th of November will have a special menu encapsulating traditional Indian food which is popular during this time of year. More information about the restaurant can be found here.

Whether it is sparklers or catherine wheels, rockets or bangers or even tucking into some spicy Indian food, there is something for everyone this Bonfire Night in Edinburgh. 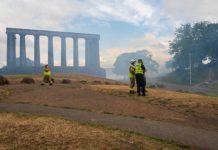