Edinburgh’s parks and green spaces have set the benchmark in environmental excellence after scooping twenty Green Flag Awards in this year’s national competition.

In total 34 flags were awarded in Scotland, with Corstorphine Walled Garden receiving the country’s only Green Flag Community Award.

This year also sees Princes Street Gardens secure its first Green Flag, whilst six other parks across Edinburgh have picked up the coveted award for the first time.

The Green Flag Award scheme recognises and rewards the best green spaces in the UK. Applications are judged against eight key criteria and only those applicants that are deemed to have achieved excellence in environmental standards will be awarded a Green Flag.

Councillor Robert Aldridge, Environment Leader, said: “These Green Flag Awards positively reflect on all the hard work carried out by our staff to make Edinburgh’s parks and green spaces so attractive. The city is renowned for its beautiful green spaces and I am delighted to see that this has been recognised at a national level.”

This is the first time since the Green Flag Awards were launched in 1996 that Edinburgh has achieved such success. A further seven Green Flags have been awarded to the city this year, on top of the thirteen retained from last year.

Phil Barton, Green Flag Plus Partnership chairman, said: “I would like to congratulate this year’s winners, who have worked hard throughout the year to keep their parks and green spaces at a high standard and ensure they are pleasant and enjoyable spaces for the whole community.

“In these challenging financial times it is heartening that the number of Green Flag Awards continue to grow. As the value of green space and the role it plays in our communities strengthens, we must ensure these high standards remain.”

The judges consider a variety of key factors before awarding parks and green spaces a Green Flag. These include the sustainability, safety and cleanliness of the environment.

The parks/ green spaces in Edinburgh to be given a Green Flag Award this year are: 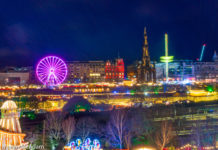