Audit Scotland have today issued an interim report into the Edinburgh Trams Project. You can read the whole report below and The Guardian Edinburgh Blog take on the report here.

Audit Scotland said:-“The City of Edinburgh Council and the body set up by the council to deliver a tram system for Edinburgh, Transport Initiatives Edinburgh (tie), urgently need to establish a clear way ahead for the project. The Scottish Government should consider whether its agency Transport Scotland should become more actively involved.

An Audit Scotland report published today, Edinburgh trams interim report, looks at the project’s progress and costs to date and its governance arrangements. It does not include a detailed review of the various works contracts or express any opinion on the project’s management or the performance of any of the contractors involved. This would be inappropriate due to an ongoing contractual dispute between tie and the Bilfinger Berger Siemens consortium, which may be the subject of future litigation.

Chair of the Accounts Commission, John Baillie, said: “Mediation talks between the City of Edinburgh Council, tie and the Bilfinger Berger Siemens consortium are due to take place soon. It is important that these talks are pursued and that all other choices including the consequences of terminating the contract are fully considered and evaluated. Public finances are tight and it is crucial that any solution must represent value for money.”

He added: “Communication about the trams project could also be better. Public confidence in the project is extremely low. The City of Edinburgh Council and tie urgently need to better explain to the public how this complex project is progressing.”

The report says that most areas of the project have progressed significantly since work began in 2007. Utilities diversion works are 97 per cent complete and almost three-quarters of the tram vehicles have been built. However, due to the contractual dispute only 28 per cent of infrastructure work has been completed against a target of 99 per cent by the end of December 2010.

So far, £402 million has been spent on Phase 1a, which is intended to run from Edinburgh Airport to Leith Waterfront. This is 74 per cent of the total funding currently available. Until the contractual dispute is resolved the total cost of completing the line cannot be accurately estimated, although it is clear that it will not be completed within the £545 million approved budget.

Auditor General for Scotland, Robert Black said: “Transport Scotland has committed £500m to the trams project. Given this significant interest and its expertise in managing major transport projects the Scottish Government needs to consider whether it should become more actively involved to help avoid possible further delays and cost overruns.”

He continued: “It is very unusual to conduct an audit of a live project but the Accounts Commission and I decided that an interim report was needed because of the public concern and the risks associated with the project.”

Speaking on its release Richard Jeffrey, Chief Executive of Edinburgh Trams, said: “We were happy to co-operate with Audit Scotland in compiling the report which gives a fair and balanced summary of the issues currently facing the project.

“Audit Scotland are, quite rightly, asking questions regarding the spend profile, governance and plans for going forward. There is, however nothing that they have addressed which we are not already aware of, and in fact many of the issues are already the subject of discussions between the Council and tie and have been openly discussed with the Board.

“Unfortunately we are operating in an extremely unusual environment where we are unable to communicate much regarding the key issues facing the project publicly. However we’re pleased to note that the report recognises that the project’s progress and risks are reported regularly to our Board, shareholders and funders.

“Understandably our focus at the moment is finding a way through the mediation process and agreeing a solution that will bring trams to Edinburgh as quickly as we possibly can, whilst protecting the public purse.”

Did any one else notice that Trams spelled backwards is smart……? 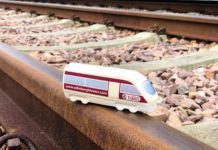