Colin Montgomerie met John Clark employees today, including those from the Edinburgh dealership, to find out about the fundraising activities that the family run car dealership have lined up to raise thousands for Maggie’s Centres across the country.

John Clark Group’s employees at their Edinburgh dealership will be fundraising throughout the year towards Maggie’s Edinburgh Centre, which is based at the Western General Hospital.  Dealerships in Fife and Dundee will be raising funds for Maggie’s Fife and Maggie’s Dundee respectively.

Charity champions from each of John Clark’s dealerships attended the launch in Aberdeen today, taking the chance to meet the man who led the European Ryder Cup Team to victory in 2010.

John Clark Edinburgh Charity Champion, Stuart Miller, said: “I have known both close relatives and friends that have had cancer, some of whom have survived but also others who have sadly passed away. During the illness and death of a close relative recently, I became aware that it would have been beneficial if there had been somewhere for both the patient and friends and family to go and relax, away from the sterility of the wards. Whist I had a vague knowledge of Maggie’s, I did not realise that the Centre was actually only 100 yards from the ward and where I spent the last  three days and nights sitting by the bedside until the end. In fact when I visited the Centre recently I could see the ward which brought back both sad and happy memories. There are many worthwhile charities looking for support but I personally feel that Maggie’s – for the care it can give during the illness but also for the ongoing support it offers – is a wonderful concept and I am delighted and proud to be able to support them through the John Clark Motor Group.”

Kenny Aitken, who is also a Charity Champion for John Clark Edinburgh, added: “Like most people, I have been close to someone with cancer and, from their experiences, understand the enormity of the challenge of facing cancer.  It is good to know that there is a Maggie’s Centre in Edinburgh, which provides the much needed support to those with cancer, their friends and family.” Colin Montgomerie said: “I have met with John Clark Group’s owners and charity champions today and their passion and commitment for raising funds for Maggie’s Centres across Scotland is inspiring.  I wish them the best of luck in their fundraising endeavours.” 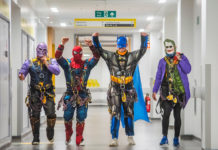