Edinburgh has been chosen as one of four UK cities to help save pollinating insects, such as bees, which are on the decline.

A biodiversity officer from City of Edinburgh Council will work with Edinburgh University and wildlife trusts to explore how cities could help to bring back insect populations many of which are essential to the pollination of UK crops.

Environmental changes, pests and diseases have all led to recent falls in numbers of pollinating insects, and a science-based strategy for improving this situation is needed.

Now, as part of a UK-wide initiative involving academic researchers in ecology, Wildlife Trusts and Local Authority conservationists, four UK Universities (Edinburgh, Bristol, Leeds and Reading) are to explore how cities could help to restore insect populations. The countryside is under increasing pressure as cities are expanding. Which means it is crucial that urban environments are able to support pollinators.

Dr Graham Stone of Edinburgh University’s Institute of Evolutionary Biology and Malcolm Fraser, a biodiversity officer at the City of Edinburgh Council will lead the Edinburgh component of the project. They will work with local practitioners and enlist the help of schools and residents from Edinburgh -the project aims to inspire more people to get involved in pollinator conservation.

Dr Graham Stone said: “As long as flowers are allowed to grow in city habitats, and areas are left undisturbed for nesting and development of young stages such as caterpillars, then city habitats can support almost as many pollinators as found in the countryside. Our aim is to identify which habitats in cities are best, and how others might be improved – for example, by increasing the diversity of plants present or changing the intensity and timing of mowing.”

In each city, a team of researchers will look at whole communities of bees, flies, butterflies and beetles that visit flowers, constructing food webs that describe the patterns of flower-insect interactions. A series of mathematical models will then be drawn up which will map city pollinator hotspots. These models can be used to improve existing habitats and create new ones, leading to a set of “pollinator margins”, locally adapted to each city. These will act as test beds to assess whether the environments identified as most beneficial do actually encourage the most pollinating activity.

Malcolm Fraser, said: “This project could be a major step forward for nature conservation in Edinburgh. Finding out where our pollinator hotspots are means we can focus our efforts in these areas to make them as biodiversity-friendly as possible.”

At the end of the project the findings will be presented at a conference for practitioners and academics alike, providing evidence-based data for policy makers, farmers, growers and producers about the causes and consequences of threats to insect pollinators. The data should ultimately inform strategies to protect the pollination of both agricultural and horticultural crops and wild flowers.

Prof Jane Memmott from the School of Biological Sciences at Bristol University, is coordinating the whole project. She said: “The idea is to do some absolutely excellent science but also to make a real difference, to have a long term sustainable impact. Bringing local conservation practitioners on board from the very beginning has been a really important step, because they have the knowledge that can make it happen.” 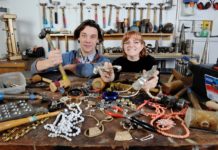