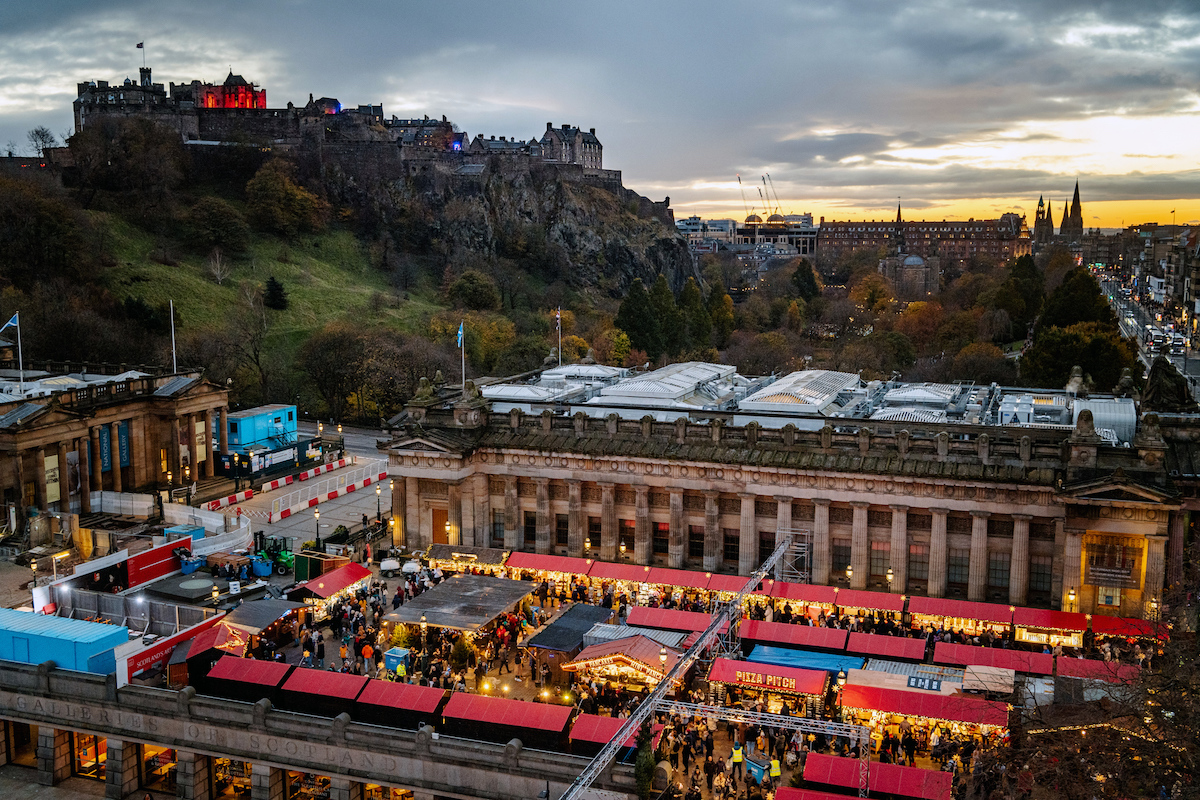 The company which won the contract to deliver Edinburgh’s Christmas from 2022 for three years, Angels Event Experience (AEE), has announced the first details of the event.

The deal is worth almost £5.5 million to the council in rental income. But rather than relocate the markets away from Princes Street in response to what the council described as “an extensive public consultation exercise regarding the….size, scale and location of some of the events” the company plans to put the markets in exactly the same place as before.

In addition there will be two new locations – subject to planning approval of the sites where the company proposes to site the markets, with a Scottish market on Castle Street and an artisan market planned for the High Street and West Parliament Square.

One of the solutions to past overcrowding was identified as “distributing Christmas celebrations more widely through the city centre”. Whether or not this has been responded to in the plans outlined by AEE is open to question. The company has however confirmed that local suppliers will be used where possible which was another council recommendation.

AEE says that it will engage with local communities in the city. The company promises discounted tickets for all primary schools to make the event as accessible as possible for all children in class groups, and that concessions will also be available.

The new producers were selected by The City of Edinburgh Council in a competitive tendering process and responding to a demand by the council for a focus on community engagement and a high quality of activities around Christmas. AEE coordinated a bid alongside leading suppliers to Scotland’s events and experiences industry such as Taylor’s who have provided the rides in the gardens.

But Edinburgh’s Christmas is not new for the AEE team, as they confirm that they have supplied and managed the market for previous Edinburgh Winter events over the past eight years, although Underbelly were the contracted council partner. Underbelly decided not to tender for either the Christmas or Hogmanay contracts this time and have confined themselves to Fringe activities in Edinburgh. The original provider of Hogmanay, Unique Events, won the contract for Hogmanay. The AEE team claims further experience as it has also managed the Angels Christmas Market at the Hyde Park Winter Wonderland in London.

Plans for this year’s Edinburgh’s Christmas are in the process of being finalised, but the company says events will include the UK’s largest free city-centre light trail as well as the Christmas market and other rides and attractions.

Applications are also now open for businesses interested in exhibiting at the market, including trade, arts and crafts and catering. The organisers say they would particularly like to host local Edinburgh businesses and food and drink providers.

In particular, they are looking for artisans who are not able to take part the whole season, but want to present their goods, and could take part in pop-up stores.

Santa Land will remain at the foot of Castle Rock in West Princes Street Gardens, including numerous children’s rides and Santa’s Grotto. Cllr Vicky Nicolson spoke out at a council meeting in June about the cost of the Christmas entertainment in the gardens when the contracts were being approved. She said that she avoided the city centre around Christmas because she felt it was unaffordable as a single parent.

The path within the West Princes Street Gardens will be used to connect the areas with various installations and festive lighting.

David Kohlert, Managing Director, Angels Event Experience said: “We are delighted to be the preferred bidder for Edinburgh’s Christmas, and look forward to making it a great success for Edinburgh’s communities and locals and visitors alike. Our track record in delivering markets and festivals across Europe, alongside key local partners including IMG/PWR, E3 and Taylor’s of Edinburgh, are a recipe for success.

“We look forward to evolving the Edinburgh’s Christmas concept over the next three years, putting Edinburgh’s community at the heart of the event. Over time, we look forward to partnering with local charities and associations, providing them with a stage to promote their work alongside the Winter Festival.”

Cllr Amy McNeese-Mechan who was the Vice Convener of Culture and Communities in the last administration said: “I think the plans announced are in line with what was put out to tender. My understanding of distributing Edinburgh’s Christmas more widely through the city centre is reflected in this announcement. I think there will be some market stalls on the Princes Street level and some on Castle Street and Parliament Square. We have had some great Scottish producers of goods at the market for some years and I welcome an increased focus on these.”

Edinburgh’s Christmas Festival will run from 18 November to 3 January 2023.

The councill’s Culture Convener, Cllr Val Walker, has been asked for comment.