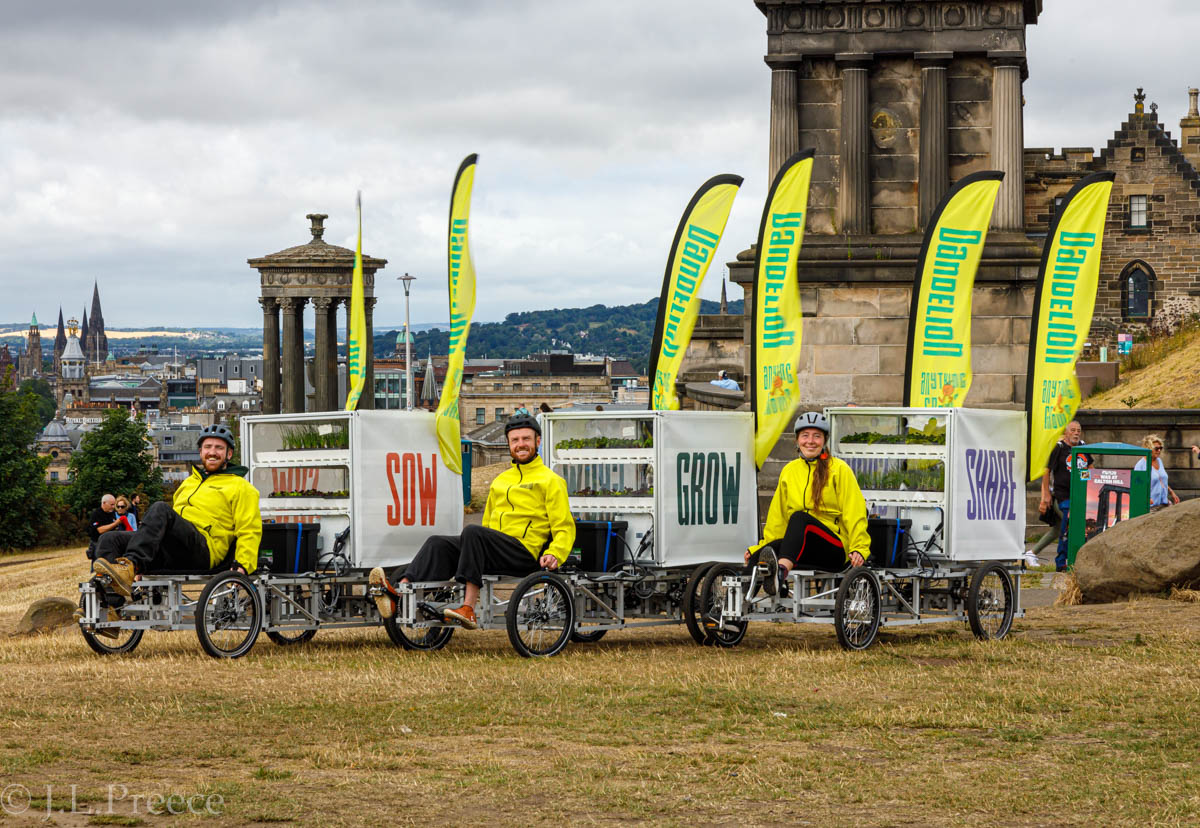 The Cubes Bike Tour forms part of Dandelion, a major creative programme demonstrating the power of collective action through an ambitious ‘grow your own’ initiative that aims to reach hundreds of thousands of people throughout Scotland and further afield this summer. The creative programme has been following the arc of the growing season, spanning from April to September 2022, bringing together music and art with science and technology to inspire people to ‘Sow, Grow and Share’ music, food, ideas and stories.

Commissioned by EventScotland and funded by the Scottish Government, Dandelion is Scotland’s contribution to UNBOXED: Creativity in the UK.

A touring fleet of cargo bikes displaying Dandelion’s growing cubes – miniature vertical farms – will travel the Highlands and Lowlands throughout August. Four custom-made, electrically assisted bikes – each carrying a cube – will visit ten towns and cities, stopping at school playgrounds, green spaces, town centres, and Dandelion’s Unexpected Gardens, among other locations. The bikes team will also be giving away free seeds to encourage people to grow their own food.

As we come to grips with the impacts of climate change, the need to travel sustainably have never been more important, and the cargo bikes show one way to what is possible. The bikes also embed active travel at the core of the tour by cycling across the country, as Scotland prepares to host the UCI Cycling World Championships in 2023.

The 1m x 1m cubes are designed to foster accelerated plant growing and have been developed to grow hundreds of seedlings under LED light, combining design craft, traditional horticultural expertise and technological innovation. The Dandelion team will also be giving away free seed packets and sharing their expertise, so that everyone can grow their own herbs at home and also find out more about Dandelion’s Harvest celebrations in September.

At each stop, the cubes will play new music specially commissioned for Dandelion by Scottish and international artists, inspired by the natural world and can only be heard at the sites, including Vendanth Bharadwaj, Arooj Aftab & Maeve Gilchrist, 2022 Mercury-nominated Fergus McCreadie, Ravi Bandhu, Trio Da Kali, and amiina & Kathleen MacInnes. Featuring programmable, immersive lighting integrated with speaker systems designed to best showcase the new music playing from the cubes. Each new music piece is commissioned by Dandelion with additional support for international work from British Council Scotland.

Neil Butler, Director of Festivals and Events at Dandelion, said: ‘We can’t wait for the Cubes Bike Tour to begin. It’s a great way to share Dandelion’s message and reach people in locations throughout Scotland. The bikes will be travelling all over the country so we’d love to see people coming along to witness some of the magic, get seeds to grow your own at home and hear more about our upcoming Harvest celebrations.’

Paul Bush OBE, Visit Scotland Director of Events said: “The Dandelion programme is creating an incredible array of events across Scotland this summer, each finding unique moments to connect with people all over the country through growing. The Cubes Bike Tour is another engaging example of this, taking Dandelion right into the heart of locations right across Scotland to be enjoyed by locals and visitors alike.

“It’s also fantastic to see events like this embed active travel as part of their programme, and it’s particularly exciting to see biking at the core of this tour as Scotland gears up to celebrate cycling on the world-stage in one year’s time, hosting the 2023 UCI Cycling World Championships”.

Cosmo Blake, Network Engagement Manager at Sustrans Scotland “We are delighted to be able to support Dandelion by supplying four cargo bikes for the Cubes Bike Tour this August. By utilising the National Cycle Network, the UK-wide network of signed paths and routes for walking, wheeling and cycling, the tour will be able to reach communities sustainably. With the ever-present impacts from climate change, the importance of both food and transport sustainability are becoming more and more relevant. Bringing together active travel, growing, and the arts is a fantastic way to demonstrate the huge breadth of possibilities of cycling for transport as well as for leisure.“