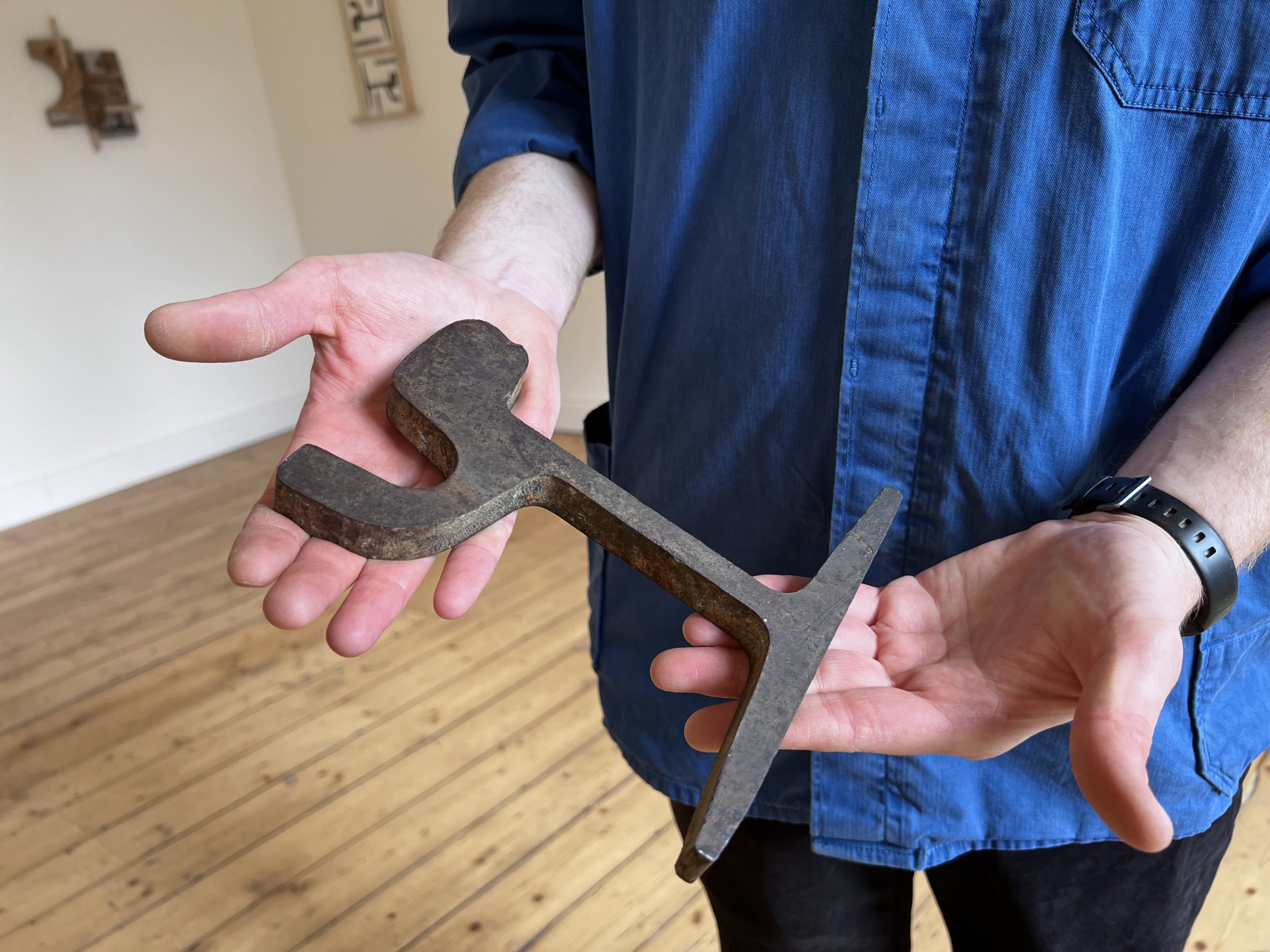 Visual artist and designer David Lemm is ideally placed to gather the materials used in the artworks now on display at Good Vibes Studios in Leith.

Right outside the front door of his studio, Trams to Newhaven has worked on the Constitution Street stretch of the tramline.

Lemm has collected materials from outside the door of the Good Vibes Studio (with similarly named record store underneath) and has used what might otherwise have been thrown away to create unique art.

One of the pieces of track has been used to create a shape which he has printed repeatedly throughout and which during your visit you will be invited to hold.

He is fascinated by the fragments of the construction. The important part of creating a tramline is the concrete, and so the wood and plywood which is used to create the shuttering for it seemed important to the artist. He explained that concrete cannot be made without the shuttering to build the framework. Even though plywood is a low grade industrial material the cost has gone through the roof in the past few months and so it is more costly in what Lemm describes as a “costly endeavour to the community and the city”.

Drawn to the sculptural qualities of industrial components Lemm finds potential connections and resonances between objects which were being discarded as waste – celebrating process and embracing chance patina to produce palimpsest like compositions.

He reconsiders the seemingly mundane or disposable and applies new value to these remnants of urban development; materials which represent the making of infrastructure which has come at great cost to the community. Through physical investigation and considered play, these relics of the site are pieced together in new ways, echoing the archeological dig that preceded the construction and encouraging speculative narratives to emerge.

Lemm said: “Usually I do work based around places that I go to but during lockdown this became my daily walk to the studio when I could get back in here. I became fascinated by the sort of incidental sculptures and materials that were being used in the tramworks. I have an archive of photographs which I initially planned to use in the exhibition but I started picking up bits and pieces that were used in the works themselves. I have amassed quite a collection over time.

“The pieces of wood are of bits of shuttering and created the structure for the concrete structure . I am interested in framing the landscape literally using the wood that has framed the landscape outside in the way that concrete is constructed. Then using that to create frameworks to create new assemblages. I think of them as relics of the legacy of the tramline. This could be the last time we see under the ground once the tracks are laid on top. These relic pieces open questions such as what is the city made of and why the materials are used and where they go afterwards.”

One of the artworks – Altar Piece – is what he describes as a kind of shrine to the trams again showing the symbol which is a print of the actual track. It was made from an offcut of the track – most of which is only underground and we only see the surface.

The workmen were happy to help David find the pieces he now has, although it seems they found him a bit of a novelty for a while.

David Lemm is a visual artist based in Edinburgh. Through research led practice he works across various techniques in response to encountered environments and found materials, often using objects containing existing information and exploring ideas around communication, process and perception.

His approach regularly begins with site specific enquiry and he has been awarded several residencies, including the Jon Schueler Scholarship at Sabhal Mor Ostaig, Skye and recent projects in Norfolk and Norway.

He has presented solo exhibitions Debris and Phenomena at Edinburgh Printmakers (2015) and Mapping King’s Cross, House of Illustration, London (2016)  and has exhibited frequently at the Royal Scottish Academy, including Reduct: Abstraction and Geometry in Scottish Art (2020).

Recent commissions include public artworks in Lerwick, Edinburgh and Royal Brompton Hospital, London and he was selected for this year’s Royal Academy Summer Exhibition.

Open daily at Good Vibes Studios 153 Constitution Street until 7 August 12 to 6pm. Lemm will be in situ for a chat (unless he and his partner’s anticipated baby arrives before the end of the week in which case replacement cover will be arranged!) And it is best to access Constitution Street from the bottom of Leith Walk.