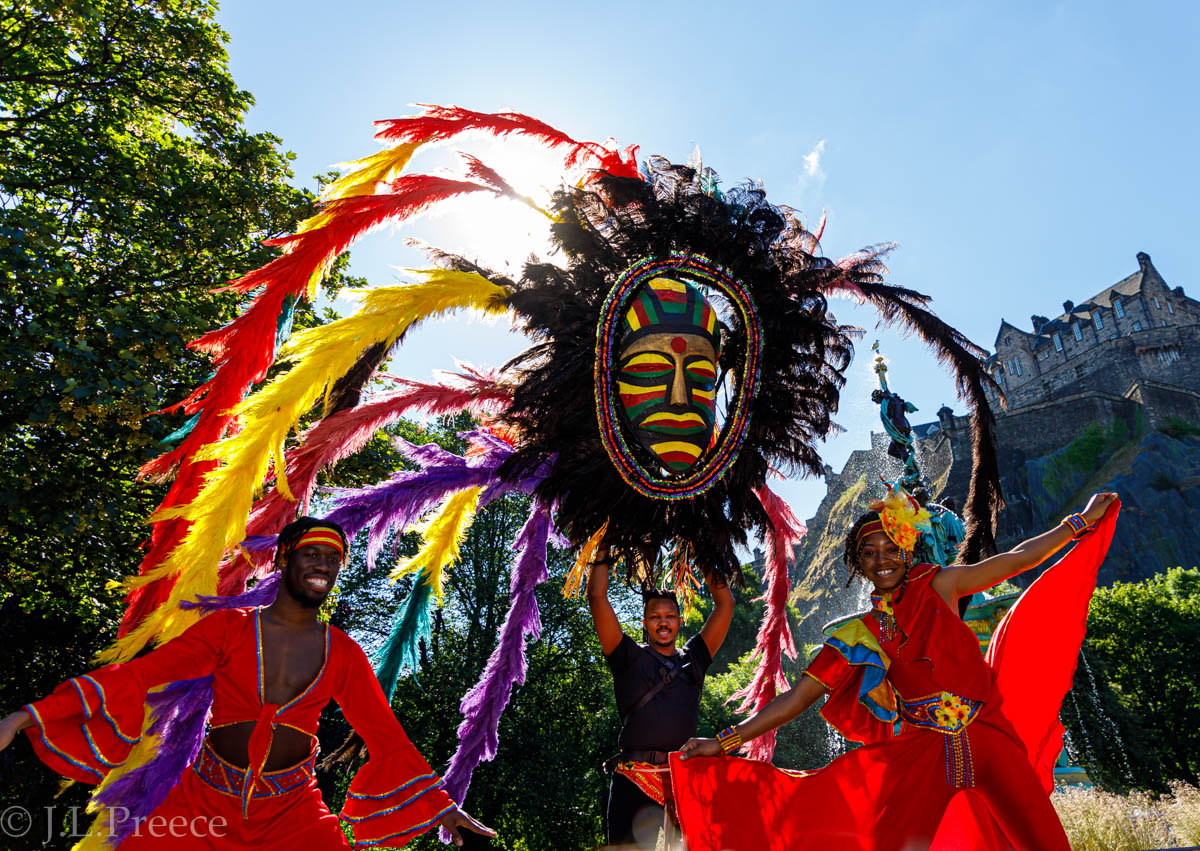 Returning to the streets of Edinburgh on Sunday 17 July, the Edinburgh Festival Carnival is ready to present the world in one city.

Edinburgh Festival Carnival is Scotland’s largest multicultural celebration. For eight years this has taken the form of a spectacular and vibrant parade along Princes Street, and Carnival in Princes Street Gardens. Every year, Carnival teams work with communities across Edinburgh, encourages those who have little or no access to the arts the chance to learn a new skill and join in the Carnival atmosphere.

This year there will be performers from over 13 countries including samba from Harlem, drumming from Lisbon, circus arts from Costa Rica, dance from Trinidad and drumming from Brazil.

From 1pm, over 800 carnival performers will parade along Princes Street with music, dance, costumes, puppets, circus, and acrobatics from groups including Barefeet Theatre (Zambia), KalentuRa Drums (the Netherlands), Gwanaval (Martinique) Bombrando (Portugal) and Samba Resille (France) as well as a host of Edinburgh groups including Pulse of the Place, Edinburgh Chinese Art & Culture Community and Dance Ihayami.

From 3pm, the party moves to Princes Street Gardens where sounds will beat from the stage of the Ross Bandstand, opening with Samba Beatz featuring 150 drummers, and closing with one of the UK’s finest reggae artists, Tippa Irie. Since May, artists from as far afield as Brazil, Cuba, South Africa, Costa Rica and Trinidad have been in Edinburgh working with community groups across the city on performance pieces that will be showcased as part of the Carnival in differing zones in Princes Street Gardens.

“Carnival offers a platform for artists from all over the world who can be seen for free in the heart of the city and the celebration is the perfect way to enjoy summer in the city.”

Culture Secretary Angus Robertson said: “We’re delighted to support this year’s Edinburgh Festival Carnival through the Platform for Creative Excellence (PLaCE), a partnership between Scottish Government and City of Edinburgh Council. It’s fantastic to see that this has enabled 30 community groups in Edinburgh to work with artists from 13 countries, including Brazil, for the Carnival.

“The Carnival is a wonderful multicultural spectacle that brings all the colour and energy of South America to Princes Street Gardens and I’m looking forward to taking part in the July parade.”