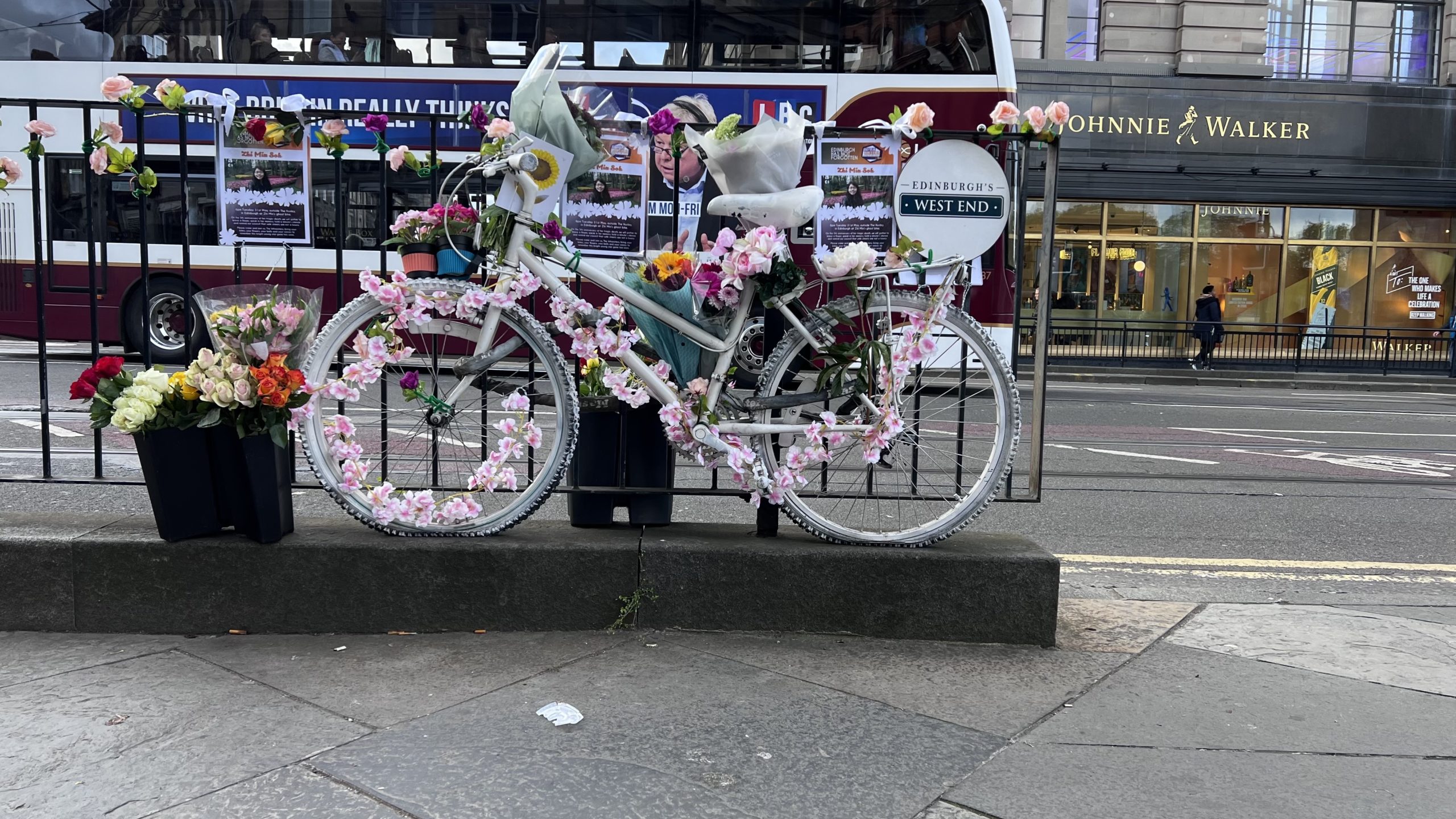 Edinburgh’s tramlines remain a significant danger to cyclists five years on from the death of a young student, campaigners have warned.

Crowds turning out for a vigil held in memory of Zhi Min Soh on Tuesday were told councillors still have “a great deal to learn and to act on” to improve road safety in the city.

It was on the same day in 2017 the 23-year old student was fatally hit by the driver of a minibus at the end of Princes Street.

Although it was not confirmed by police, it was widely reported that the tyre of her bike had got caught in the tram tracks causing the young student to fall to the ground.

Hundreds gathered by the cycling blackspot at the West End on the anniversary of the accident to pay tributes and lay flowers at Zhi Min’s ghost bike memorial on the railing along Princes Street.

Speaking at the vigil on Tuesday evening, David du Feu from cycling campaign group Spokes recalled the horrific incident – and said they had heard of numerous accidents involving the tramlines which could have ended in disaster.

He said: “Evidence suggests that Zhi Min was already on the ground, almost certainly due to the tramlines, before being hit. Sadly, a Rabbie’s bus was behind, and its driver, for whatever reason, did not stop in time.”

He added: “Spokes receives many reports from people who have come off on the tramlines, most with cuts and bruises, but some with serious injury. Any of these, however, could be fatal if a driver does not stop in time. So although Zhi Min was killed at this blackspot, it can happen anywhere on the tramlines.”

The council said the safety of road users was “of utmost importance” and stressed safety works had been introduced along the tramlines in a phased programme of improvements.

Mr du Feu, an activist who has campaigned for safer cycling routes in the city for more than 40 years, said The City of Edinburgh Council has been “slowly, slowly introducing mitigations” in the last five years.

He pointed out the installation of bike traffic lights and signs urging motorists to Give Cyclists Space were “unique in the UK and needed Scottish Government permission to erect”.

And he said a major redesign of the West End junction where Zhi Min was struck is still “probably several years away”, but added that work on “significant road layout changes” at several blackspots on South St Andrew St, South Charlotte St and Haymarket junction are due to begin in September.

Local teacher, Hayley Weetman, who spoke at the event said: “We cannot take away the pain and loss that Zu Min Soh’s friends and family must feel but I hope it will give them some comfort to see that the people of Edinburgh care.

“I’m so sad about the unfairness of what happened to Zho Min, what a waste of a wonderful young life all because the safety of cyclists are not taken seriously enough.

“I think Zhi Min touched many peoples lives, before and after her death.”

The council said various new safety measures have been introduced along the tram route including red-surfaced cycle lanes at key points to direct cyclists on the safest route to cross the tram tracks to avoid getting their wheels stuck.

Cllr Scott Arthur, the Transport and Environment Convener, said: “The safety of all road users is of utmost importance to the council, and its significance was brought into sharp relief by tragic death of Zhi Min Soh in 2017. Council staff began investigating ways of improving cycle safety in the vicinity of tram lines before this terrible event, and have been in the process of delivering a phased programme of improvements over the last five years.

“This includes enhanced road markings, the installation of cycle early release signals at 13 junctions along the route and significant changes the road layouts at six junctions to prioritise people on bikes, which is in the process of being delivered.

“The West End junction on Princes Street is a key focus too, and its remodelling will be a key part of the transformation of the Lothian Road corridor. I hope to begin a genuine public engagement exercise on this in the near future, and for work to begin as soon as funding allows.”