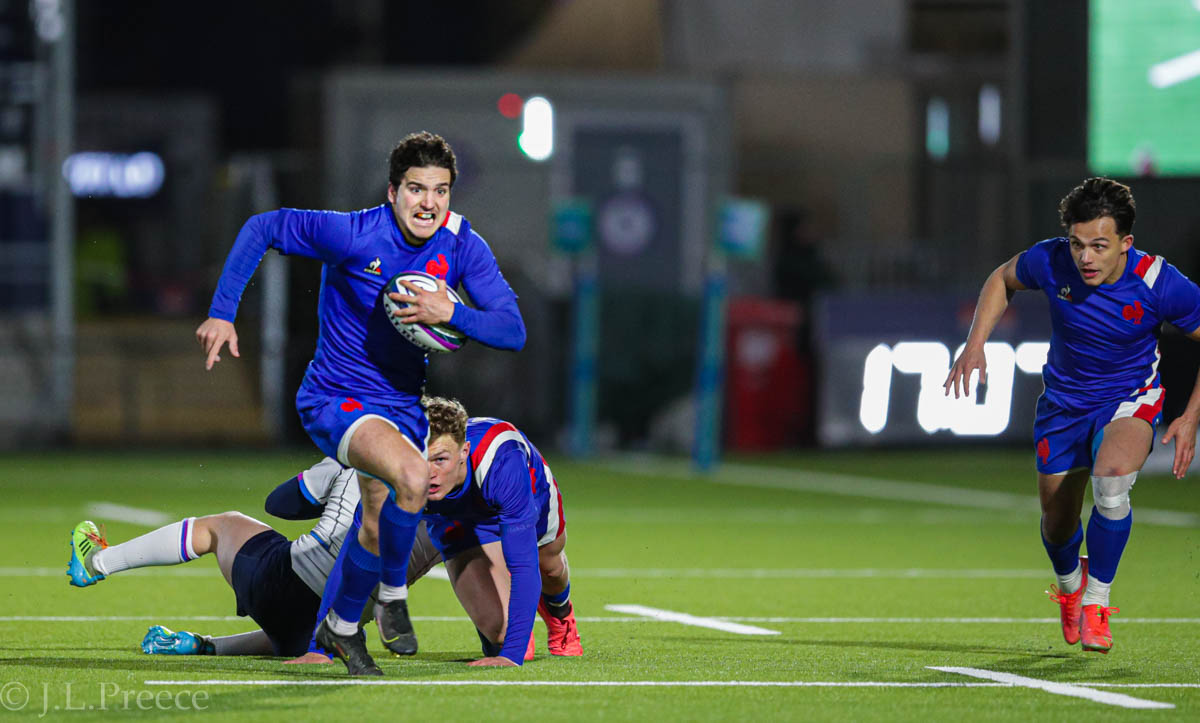 After leading at half time but, ultimately, losing out in their previous two matches, Scotland’s U20 team were hoping that France would provide the springboard needed to get their U20 6 Nations campaign back on track.

Early on, that looked like a distinct possibility as a penalty award was sent to the line well inside the French 22. However, despite the best efforts of the pack, the hosts had to settle for a kick at goal from a penalty awarded for a ruck infringement.

Full back, Robbie McClintock duly obliged and, six minutes in, Scotland were 3-0 to the good.

Five minutes later, it was honours even as France came roaring back into the game and forced a penalty inside Scotland’s 22. No. 10, Emile Dayral, then slotted home the kick to draw the side level at 3-3 after 11 minutes.

A couple of minutes later, after more attacking pressure, Dayral missed the opportunity to take the lead for his side from another penalty.

Then there was the first of, what was to be, many TMO decisions as one of the assistant referees drew the attention to a possible head-on-head clash when Scotland’s McClintock was tackled by wing, Jefferson Joseph, resulting in a red card for Joseph and a lengthy Head Injury Assessment for McClintock.

With France now down to 14, surely that was now the chance for Scotland – who were looking a bit ‘under the pump’ up the that point – to draw ahead.

Well, France didn’t seem to think so and they picked up the pace when Scotland fluffed their line out from the penalty, making some worryingly easy progress through the Scots’ defence.

The first try of the match came down the left as the visitors got round the outside of Scotland and, in a well-worked passing move, put No. 7, Esteban Capilla, thorough for a, TMO adjudicated, try. With the kick missed it was 3-8 after 19 minutes.

Scotland enjoyed a short period of possession and pressure, but not only was their scrum under severe strain, the line out wasn’t looking too clever either, handing the ball back the the opposition on several occasions.

The French then made good use of said ball and drove deep into Scottish territory, eventually winning another penalty, which Dayral dispatched for 3-11 after 28 minutes.

Five minutes later, after a bit of back-and-forth, it was back to the home try line for France as they scored their second try of the half.

The Scots defended desperately just outside their five-metre line, but, eventually, the visitors broke through and dotted down in a pile of bodies, Dayral being credited with the score. He then converted for 3-18 after 33 minutes of play.

The score remained 3-18 at the break, but France were looking good for the win and Scotland were looking around for some inspiration.

When the teams returned to the field for the second half, Scotland had made a raft of changes to their pack, presumably, to try to get some of that inspiration onto the pitch.

Four minutes into the second half, France crossed the line again as, off the back of another stolen line out, they moved the ball across the pitch and into the hands of centre, Emilien Gailleton who sailed over for the third French try. This time Dayral blew the extras as the ball fell off the kicking tee after he had started to move, so the points went abegging. Still, it was 3-23 for the 14-man visitors.

In the lead up to Scotland’s first try, they enjoyed a rare period of dominance, which was only thwarted by some handling errors and a strong French defence.

However, pressure told eventually and, from a right touch line out, the pack drove the ball across the face of the visitors’ post in a series of rucks and mauls. As they inched closer, the French ran out of bodies and the forwards piled in to heave Callum Norrie over the line for the points. McClintock, back after his HIA, then knocked the ball over for the conversion and the score was 10-23 after 61 minutes.

France weren’t quite done yet, though and about five minutes later, they were rewarded for some powerful play in the opposition’s 22 with their fourth try of the night, which yet again went ‘upstairs’, and, with the conversion a 10-30 lead.

A few minutes later, the visitors were down to 13 men as sub, Jules Coulon, was red-carded for a dangerous tackle on Scotland’s Andy Stirrat when he upended the centre in a ruck situation.

Scotland, by this time were began to see the advantage of the extra men and a well worked break down the left flank had them threatening the French line. However, a superb covering tackle by France’s No. 22, Simon Tarel won his side a scrum near the line.

In a moment of rare misfortune – for both sides – the ball squirted out the back of the French pack and spun away from Tarel. It was picked up by Scotland’s Christian Townsend and he dived for the line. But Tarel had regained his composure and with another superb tackle, grabbed Townsend, forcing him the drop the ball. Oh, well….

However, the home side were eventually rewarded with their second try, when they made the extra players count and Josh Taylor finished off the move with a fine piece of handling skill to touch down. McClintock slotted home the conversion, but, with less than a minute to go, it was all too late and France took a, relatively easy win, 17-30.