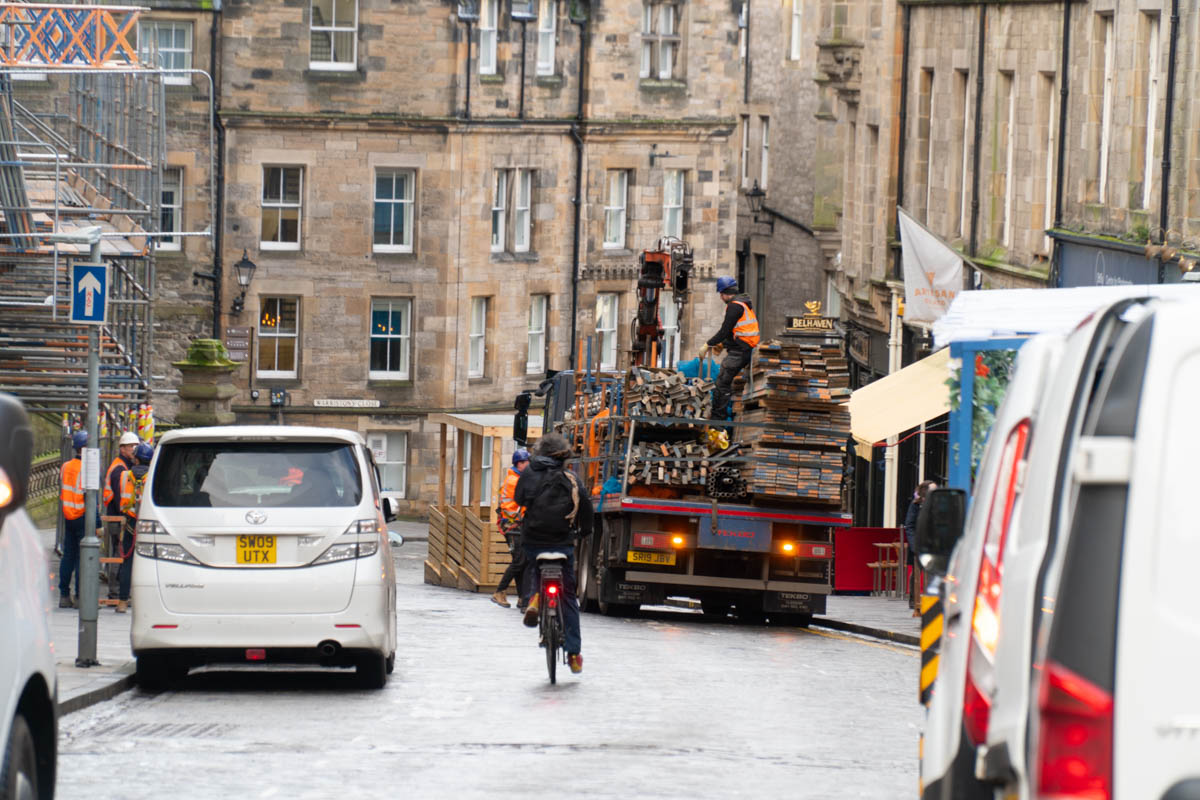 The City of Edinburgh Council says it will tighten “confusing” parking rules on a partly-pedestrianised city centre street where vehicles blocking the pavement have become a regular fixture.

The situation on Cockburn Street was branded a “confusing mess” by one resident, with uncertainty over parking regulations and a lack of enforcement  adding to issues created by ‘temporary’ on-street dining areas put up during the pandemic to help local businesses which have since been refused planning permission – but which are still to come down.

In a bid to tackle the problem the council has now said it will bring in more enforcement, ban loading on a section of the street and  change the road layout.

Cockburn Street was made a ‘pedestrian priority’ zone in 2020 under the Spaces for People scheme – now known as Travelling Safely – meaning it is closed to all motorists except disabled blue badge holders and delivery drivers.

Blue badge holders can park anywhere except on yellow lines, while loading for businesses is allowed for 30 minutes at a time. Under current regulations, they can freely access the street by way of The Royal Mile between 6.30 am and 10.30 am.

Outside this window, access is restricted by retractable bollards which go up to prevent traffic from entering the section of The Royal Mile which provides access to Cockburn Street, with access authorised by council staff through a CCTV intercom system. This was not operational during lockdown.

Questions have been raised over just how pedestrian-friendly the ‘pedestrianised’ road is, as dozens of images and videos of vehicles driving and parking on the pavement often after 10.30 am have appeared on social media on the account SOS Cockburn Street.

The issues have in part been blamed on the temporary outdoor seating erected in loading bays and parking spaces along the street during the pandemic.

A nationwide ban on pavement parking agreed by The Scottish Government in 2019 does not come into effect until next year despite being introduced to Holyrood by Joe FitzPatrick MSP some ten years ago. However it is already illegal to drive on pavements or stop where parking restrictions such as yellow lines are in place – practices that have become commonplace on Cockburn Street.

The council has now been urged to clarify the rules and issue penalties to those who break them.

The ongoing situation has been extensively documented by a local resident who goes by the pseudonym ‘SOS Cockburn Street’ on Twitter.

In their daily posts, cars, vans, HGVs and bin lorries can be seen mounting the pavement where double yellow lines run parallel, often driving close to pedestrians and forcing them walk on the road.

Recent videos have showed delivery trucks reversing up the one-way street and driving for several metres along the pavement close to passers-by.

They even reported seeing a car stopped on the pavement for over three hours without receiving a ticket.

In an interview with the Local Democracy Reporting Service, the resident behind the tweets, who wishes to remain anonymous, said: “Before the Spaces for People measures, there were parking meters in the street and these could be used for deliveries.

“As there were no wooden sheds occupying one side of the carriageway, it was easy to park without blocking the road or mounting the pavement. Pavement parking was extremely rare, and we never saw dangerous manoeuvres such as HGVs driving up the wrong way or driving along the pavement.

“The wooden sheds have created all manner of problems for locals and visitors. There are the pavement parking and dangerous driving issues, but they also create a hazard for legitimate road users. Lorries frequently get stuck at these pinch points.”

The ten Old Town bars, restaurants and cafes which were allowed the temporary seating in the wake of Covid-19 restrictions – including five on Cockburn Street – were all refused permission to keep the “sheds” in place permanently at a council meeting last month.

And a decision on when they will have to be removed is due to be made by the Planning Committee next week.

“Some of the huts are no longer used for eating, but instead serve as bin stores,” the spokesperson for SOS Cockburn Street added. “All are unsightly and do not fit into a World Heritage site.

“So in short, the sheds are the primary cause of the problems – although there is also the issue of whether Cockburn Street is pedestrianised or not.”

They described the situation as a “confusing mess”, adding: “If vehicles are allowed in by the council during pedestrianised hours, effectively it is not pedestrianised and pedestrians are not safe walking in the road – which was the whole purpose of Spaces for People!”

The council said they are aware of the issues on Cockburn Street and added officers have agreed on measures to mitigate problem parking.

These include making “changes” to the road’s layout, banning loading on a section of the street and stepping-up parking attendant patrols in the area.

A council spokesperson said: “While the creation of a pedestrian priority area on Cockburn Street has helped businesses to recover and adapt to Covid restrictions, as well as encouraging people to spend time there, we are aware there have been some issues with inconsiderate parking.

“In response to this we are in the process of introducing some changes to the road’s layout, prohibiting loading between the junction of the High Street and Fleshmarket Close (which will cover the footpaths at this point). We’re also increasing enforcement patrols in the area to manage parking better, where we have the legal powers to do so.

“These changes aim to strike a balance between pedestrian safety, access for disabled people and the essential requirements for the street’s businesses to operate.”

All images below ©2022 The Edinburgh Reporter