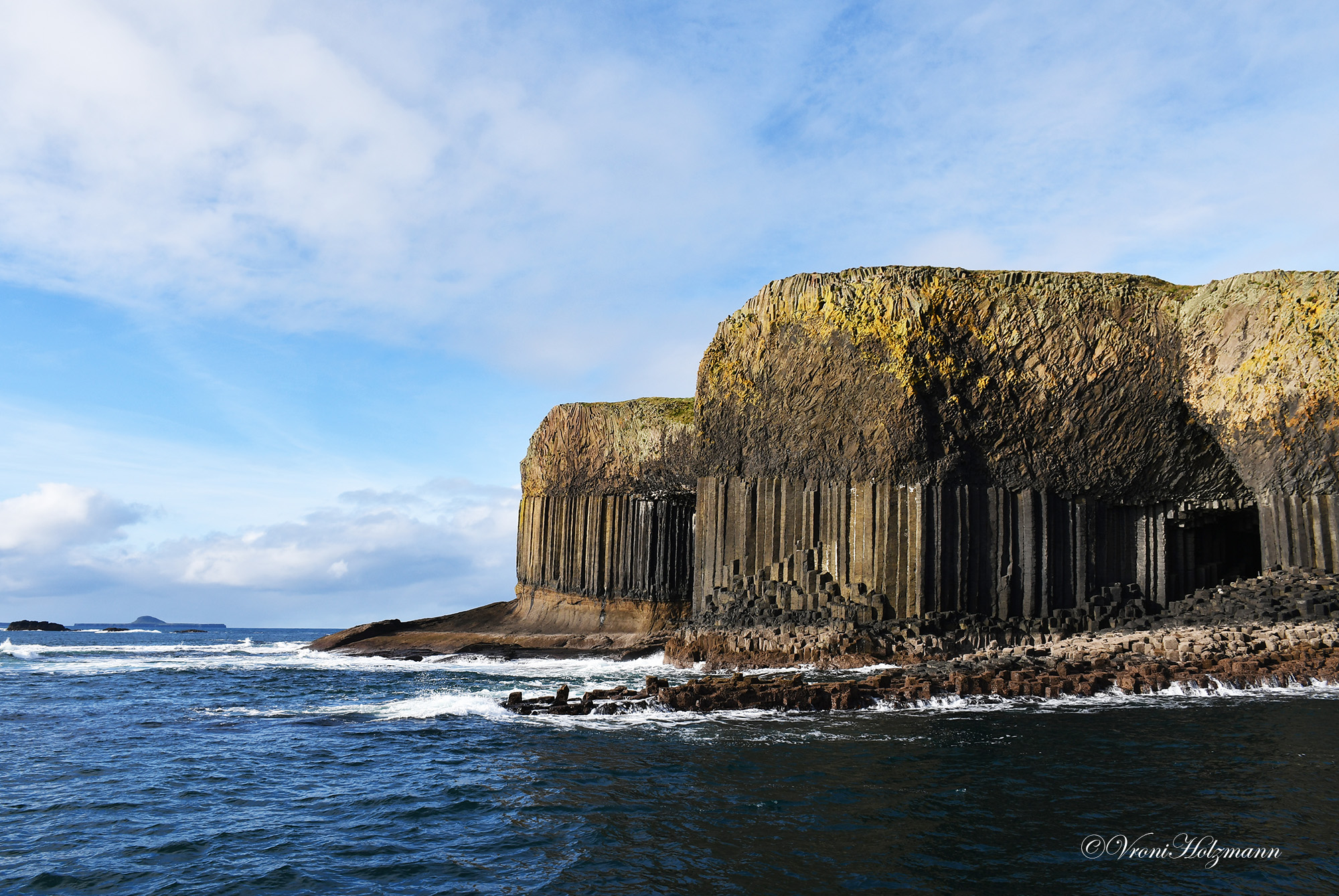 After 25 years in Scotland I had the opportunity of going to Staffa for the first time. This island is a miracle of nature and I always found hard to believe that the images I’d seen of it were true. An island made of hexagonal basalt columns, really?

To get to Staffa from Edinburgh you have to take a several-hour drive to Oban, then take a ferry to Mull. There you have to find the little port of Ulva Ferry to get across to Staffa. This works only in good weather, half of the year no ferry will go as wind conditions make it too dangerous. Luckily my friend Lucille on Mull knew how to assess the wind charts, helped by the fact that she knows the actual skipper on the boat. We decided I should go on a Friday at the end of last October. This turned out to be a good choice, as the boat could neither go before nor after this day as the gales were too strong.

So I waited on the pier with a bunch of freezing folk who were along for this special trip. Once on the boat the sun decided to come out and the sky turned blue for us. The island appeared before us and seemed utterly otherworldly to me, mystical and beautiful. We were allowed to get off the boat and roam the island, at which point we were told not to get too close to the baby seals. Seal puppies? More magic on the trip. I spotted them lying around the beaches quite helplessly whilst I could see mum’s head in the water, eyeing us suspiciously and waiting for us to leave.

So I went to explore Fingal’s Cave, where I was hit by a very special atmosphere, numbing and freeing at the same time. The water beneath gave a feeling of endless ocean beyond and the columns reminded me of a nature made cathedral, a magnificent space to think about the wonders of the natural world and our smallness in it. I wasn’t surprised that Mendelssohn chose this place to compose his Hebridean Overture, inspired by its beauty, although I have also heard that he was feeling quite sick after the boat ride. Can’t have one without the other I guess. I stayed in the cave as long as I was allowed and then we got collected and transported back to the real world.

However, as we were thrown about by the boat and splashed with water with the oceans now a bit rougher, a huge rainbow appeared over the islands. Had we not been blessed enough? I quickly took one thousand photos of this amazing sight and we got delivered back to Mull.

It was a dream come true to be allowed onto this magical island, to see it with my own eyes and experience the complete natural beauty it radiates. And in typical Scottish fashion there was no cafe and no gift shop, just a friendly skipper cracking jokes and telling stories. He gave us the feeling as if it was completely normal to have such an amazing natural wonder kicking about in the Atlantic. And told us casually that no visitor boat will go out there for the next five months. To get to Staffa you clearly need luck on your side.

A calendar created by Vroni Holzman featuring the photos below is available to purchase here.