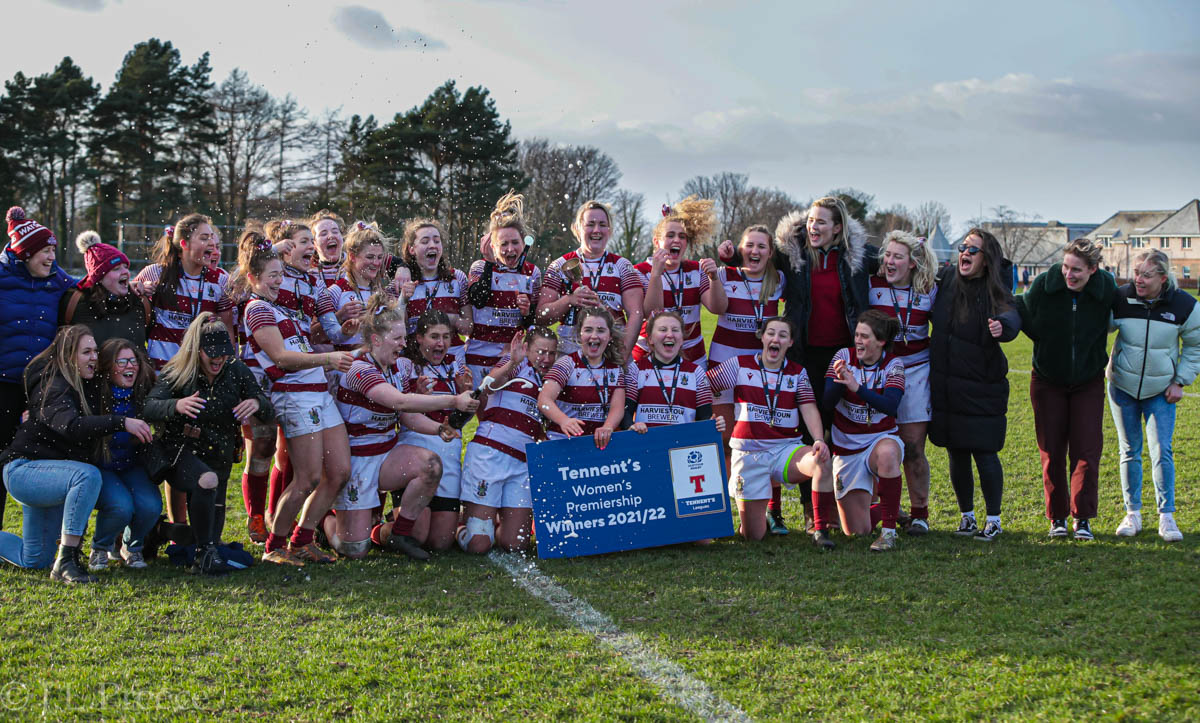 Watsonians WRFC finished top of the Women’s Tennent’s Premiership after the 2021-22 domestic season. With Hillhead-Jordanhill just one point behind in second, the Season Finale at Myreside – in a howling gale – promised much in the way of a competitive match.

And, right from the off, it looked as if that promise would be fulfilled as the visitors kept the home side in check for the first 5 minutes or so.

However, once Watsonians found their feet, they broke down the left and eventually putting Briar McNamara through for the opener. She then converted for 7-0.

Hillhead went straight back on the offensive from the restart, pressing the Watsonians’ defence and making good yardage into their 22, however, in what was to be the theme of Hillhead’s day, Watsonians defence held and turned the ball over.

The second try came by way of the left wing again, but this time winger, Fran McGhie – with a little help from ‘a friend’ – kept hold of the ball and sprinted down the line and in under the posts. Another McNamara conversion took the score out to 14-0.

The third try came from a dominant home pack as they blasted their way through the visitor’s defence, setting up inside the 5 metre line. A series of pick-and-goes saw hooker, Kaeli King, ground the ball in the goal line pile up.

From about 15 metres right of the post, McNamara then slotted home the conversion of the day as she started the ball miles left of the posts, only to have the wind bring it back round for the points.

With the wind continuing to cause all sorts of issues, Watsonians now had their tails up and scored another two tries – one from Sarah Jones and a second from McGhie – to close out the first half 31-0 ahead

The first 20 minutes of the second half saw Watsonians score their sixth try as, early on, Bryony Nelson went over to make it 36-0.

Hillhead-Jordanhill then put in one of their best periods of play, but still their inability to hold onto the ball prevented them from worrying the try line, but it all fell away as the home side scored their seventh try when scrum half, Rachel Law, fired herself through a hole in the defence to go over under the posts. Another conversion from McNamara then took the score out to 43-0.

The final 20 minutes saw Watsonians over the line for another four tries.

Two from McNamara – one an interception, followed by a kick-and-chase from almost half way – and one apiece from Susie Clements and Fran McGhie, giving the latter a hat-trick of tries for the match.

Despite the final score of 67-0, Hillhead-Jordanhill never let their heads drop and kept plugging away until the end, with particular mention going to their forward pack who managed to dominate their opponents in the final quarter.

However, it wasn’t enough and Watsonians’ retained the Women’s Tennent’s Premiership title for another year.