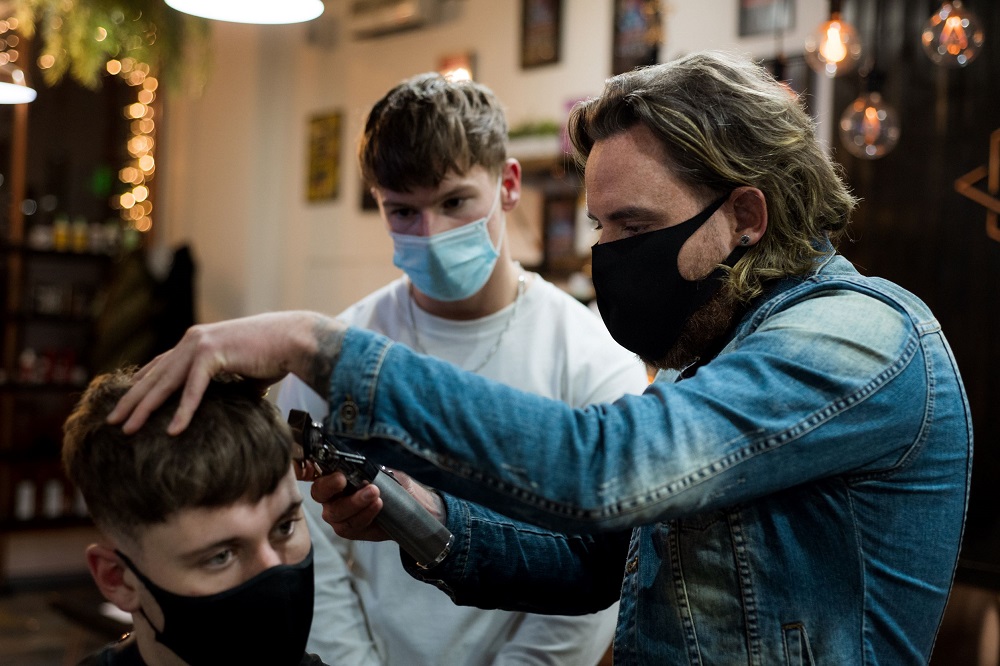 A pioneering barbering academy has welcomed its first intake of students onto a 15-week course that will launch their careers in the burgeoning male grooming sector.

The first eight students have enrolled into the new Sovereign Barber School in Glasgow. It is the first training venture for Sovereign Grooming and the team hope to train around 32 barbers every year, seeing each of them finish the course with sought after formal qualifications.

One of the delighted new students is Glasgow local, Aimee Laws. The 29-year-old applied for the course after discovering a passion for barbering while salons were shut during the pandemic and she found herself cutting her own hair to practice her skills.

She said: “The barber school is a great option for people just starting out in the industry as you can learn both the theory and skills while getting the opportunity to put these into practice.

“I’m making a career change from music to barbering, so it is a pretty big jump – but I’m looking forward to it. Previously I taught and played music in social and youth care settings but like many, lockdown gave me a chance to really find out what I wanted my career to look like.

“It’s nerve-wracking to think what the next three and a bit months will have in store but I’m excited to see the skills I’ll have developed by the end.”

The company, which is headed up by award-winning barber Kyle Ross and marketing expert Ryan Crighton, has invested over £500,000 on the purpose-built training facility which sits across three floors (2,570 sq ft) in 38 Renfield Street.

The ground floor will be used as a functioning salon with 12 staff members over the next 12 months. This will also give students the opportunity to be amongst the day-to-day working environment of the salon.

Aimee added: “It’s inspiring to be learning the ropes directly from the Sovereign Grooming founder who is one of the industry’s best barbers. Kyle is known for delivering the highest standards of barbering, so I’ll be looking to pick up as many tips and tricks as I can.

“I’ve done some evening barbering courses in the past but nothing can prepare you like working in a salon. I’m especially looking forward to learning some of the modern barbering that Sovereign Grooming offers.”

The barber school is part of an overall plan to help the grooming industry deal with staff shortages following the impact of the pandemic.

Kyle Ross founded Sovereign Grooming in 2016 in Aberdeen and has since opened a popular salon at the New Waverly development in Edinburgh’s city centre. Kyle will personally oversee the training and want to develop “the best young talent in male grooming”.

Kyle will be joined by fellow barber Barry Doolan, who has been brought in due to his wealth of experience in educating and delivering similar qualifications.

Kyle said: “The Glasgow training academy has been in the pipeline for a while. As a company we’re extremely passionate about learning and development so it was the only natural progression to open our own barbering school.

“Over the 15-weeks, aspiring barbers will become fully qualified, learning typical industry skills whilst gaining important insight into fashion, photoshoot and stage styling – something that other barbering schools don’t offer.”

The school will have up to eight students going through training and qualification every quarter. The three-story Glasgow branch which will also offer luxury hair and beard services and male-focused beauty treatments as well as serving as a brand HQ.

Kyle added: “We want to inspire future generations of barbers to help people look and feel the best they possibly can in and out of the chair.”

After the first salon in Aberdeen proved an immediate hit, Kyle attracted investment to open salons in both Edinburgh and Glasgow, adding business credentials to a CV which had already seen him garlanded with multiple barbering awards.