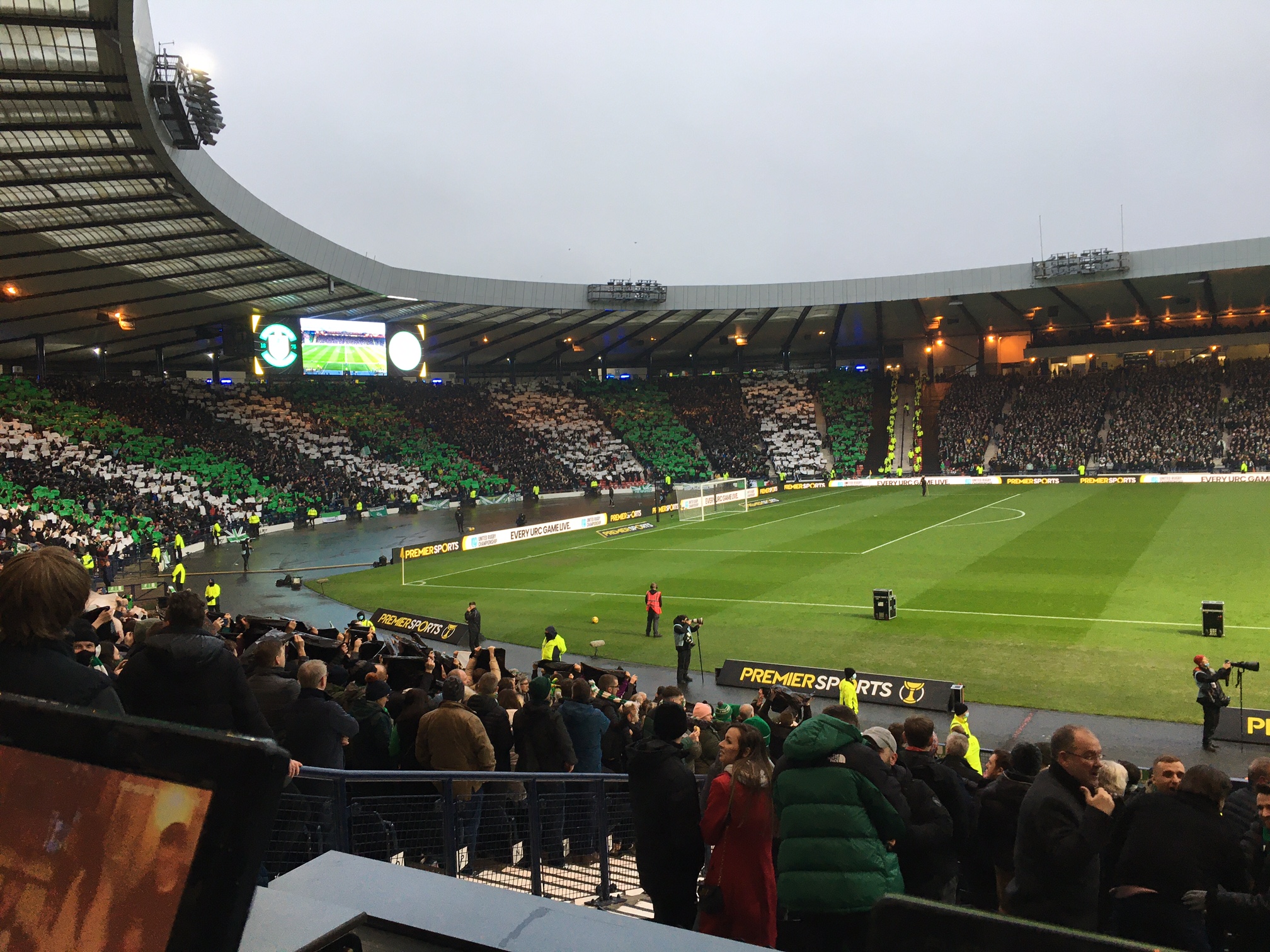 Hibs suffered an agonising 2-1 defeat at the hands of Celtic despite a spirited second-half performance at a dreich Hampden Park this afternoon.

Interim boss David Gray made one changes to the starting XI that beat Dundee in midweek with Jamie Murphy replacing Chris Cadden who had to be content with a place in the bench.

Celtic had the better of the first-half but only really had one clear cut chance when Carl Starfelt’s free header from a corner flew wide of the post.

Apart from two exciting runs from Martin Boyle, the Hibs’ fans had little to cheer.

That changed shortly after the restart when captain Paul Hanlon launched himself at a corner and his header crossed the line despite the best efforts of Josip Juranovic.

The Hibs’ fans were still celebrating when Celtic equalised in controversial circumstances after Celtic captain Callum McGregor picked out Kyogo in the box with a superb pass and the Japanese striker beat Hanlon and fired the ball past Matt Macey.

The Hibs players all claimed Kyogo was offside but the goal stood.

Hibs almost regained the lead following some great play by Kevin Nisbet but his shot was well saved by Joe Hart.

Celtic’s second goal came in the 70th minute and once again there was controversy.

Celtic were awarded a highly disputed free-kick on the half-way line and whilst the Hibs defence were organising Tom Rogic’s quick pass found Kyogo who lobbed Macey from the edge of the box.

With minutes remaining Nisbet’s late header glanced the upright and Hanlon side-footed over. Ryan Porteous had clearly pushed in the back by Starfelt as he attempted to get on the end of the cross but referee John Beaton missed what was an obvious penalty.

After the final whistle Gray told BBC Scotland Gray tells BBC Scotland: “We asked the players to give everything and have no regrets. I’m proud of how much they put into the game.

“We started the second half really well, got the goal but need to see through that period after we scored. It’s disappointing we couldn’t.

“The manner we lost the goals was sore, but every player has given me absolutely everything from the minute we were put in charge.”

Gray feels Hibs should have been given a second-half penalty for Carl Starfelt’s push on Ryan Porteous and queries the free-kick for Celtic’s winning goal.

“I don’t understand how that’s a free-kick,” he adds.” If it is, how he misses the foul on Ryan Porteous in the penalty box is beyond me. He has to give a penalty.

“It makes it harder to take.”