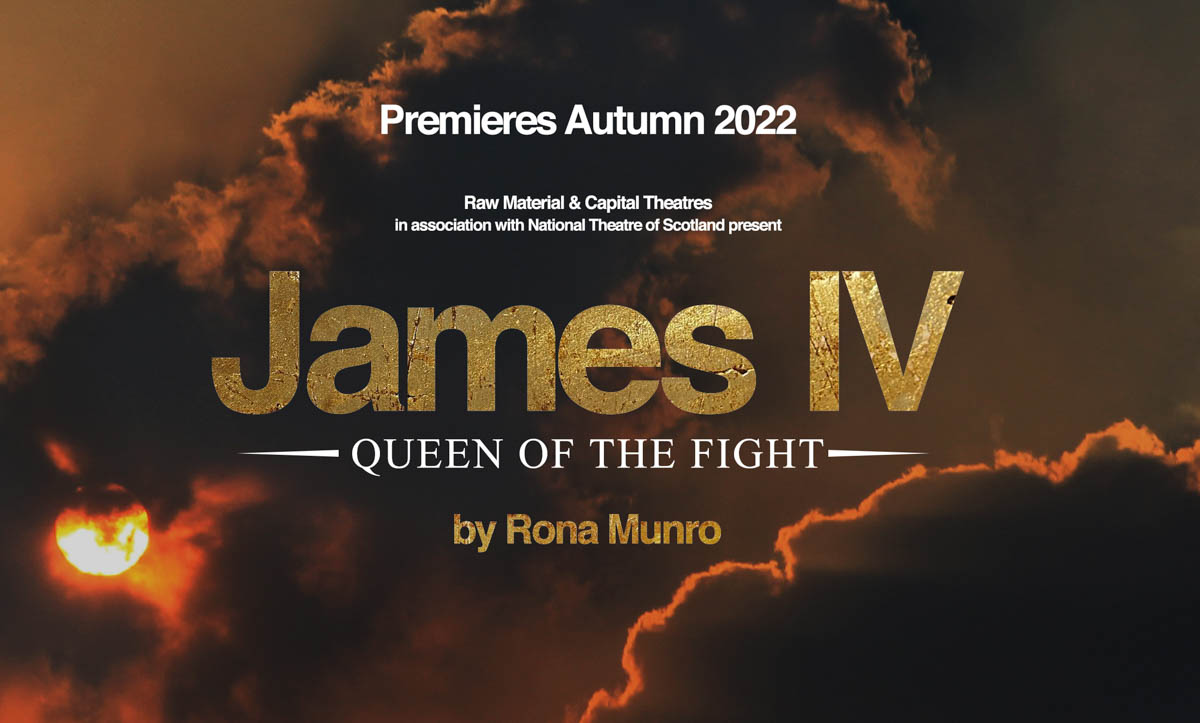 In autumn 2022 Rona Munro returns to Scottish stages with a bold new production: ‘James IV – Queen of the Fight’, directed by Laurie Sansom – the formidable duo who brought us James I, II and III.
They are reunited with Designer Jon Bausor who also worked on the first three plays, and joined by Venus ex Machina as Composer and Jaïrus Obayomi as Associate Director, with British Historian Dr Onyeka Nubia working as a historical consultant on the project.

Scotland, 1504, seen fresh through the eyes of new arrivals Ellen and Anne, two Moorish ​ women who were expected to take their place at a royal court….but not this one. Both women now have to fight to find and keep a place in the dazzling, dangerous world of the Scottish Court of James IV. It’s a world where war is never far away, words of love and promises of peace are not what they seem and where poets might turn out to be more dangerous than any assassin.

Employing the same wit and theatricality of the first ​three James Plays (James I, II and III) acclaimed playwright Rona Munro takes you back to a thrilling and uncharted period of Scottish history in this brand new production. Join us on the journey.

Rona Munro’s vividly imagined trilogy has already brought to life three generations of Stewart kings who ruled Scotland in the tumultuous fifteenth century to the acclaim of audiences and critics from Scotland to Auckland. They were acknowledged as a landmark event in Scottish and UK theatre. Now comes James IV with Laurie Sansom directing once more.

Jon Bausor’s set designs for the James Plays have already stunned audiences and his work for James IV will be just as visionary. Venus Ex Machina will bring her haunting electronic soundscapes to the project. Jaïrus Obayomi will join the creative team as Associate Director supported by a Federation of Scottish Theatre Bursary. Dr Onyeka Nubia is historical consultant on the project who has been working closely with Rona Munro on depicting the, often underrepresented, diversity of James IV’s court.

Co-produced by Raw Material, the award-winning, independent, producing company based in Glasgow, and Capital Theatres, Scotland’s largest theatre charity based in Edinburgh, in association with National Theatre of Scotland, the production will open at the Festival Theatre, Edinburgh in the autumn of 2022 before touring to Glasgow, Dundee, Aberdeen, Inverness and Stirling. See full dates below.

Rona Munro, Writer said: “The first three James Plays – James I – The Key Will Keep the Lock, James II – The Day of the Innocents and James III – The True Mirror, were among the most exciting and the most satisfying theatre productions I’ve ever been part of. To be able to continue this work, with Laurie and with this team is, for me, to continue that excitement.

“My larger ambition is to extend the Stewart history of Scotland through James V, Mary Queen of Scots and to conclude with James VI who became James I of England. My hope is that I can make this history more accessible, make those invisible in history visible again and provide a representation of the most potent and telling truth of history – it was made by people like us.”

Laurie Sansom, Director said: “It’s so thrilling to be working with Rona Munro and this brilliant creative team on her extraordinary cycle of history plays. They speak to today’s world through the prism of the past with such confidence and wit that they are a gift to any director, telling big stories with insight and irreverence.

“James IV is no exception, telling an epic story of political bravado and personal betrayal. I’m so looking forward to making work in Scotland once more and sharing this next episode with audiences.”

Venus ex Machina, Composer said: “There is a long history of Africans in Scotland, going back to Roman Emperor Septimius Severus in AD208. I hope my score can help find the resonances between the story of Moorish courtiers marooned in Scotland in the fifteenth century and the contemporary Scottish experience. It is exciting to be asked to work on such an ambitious and fascinating project, and I am privileged to be working with such an accomplished team.”

Dr Onyeka Nubia, Historical Consultant said: “Storytelling is history. This play translates the history that I teach into an adventure absorbable by all. What is produced is high entertainment. I’m ecstatic to be involved in this collaborative-artistic exploration that interweaves Scottish and African British history, — to show us another Scotland! It is a Scottish tapestry, in broad-Scottish prose, that is filled with anguish, irony, laughter and danger.

“The court of King James IV has been dead for more than five hundred years, — but it has never seemed more alive than in the play James IV! I am honoured that I could help reclaim fifteenth-century Scotland, from the Victorian-British myths that have too long obscured it.”

James IV
Queen of the Fight

In association with National Theatre of Scotland