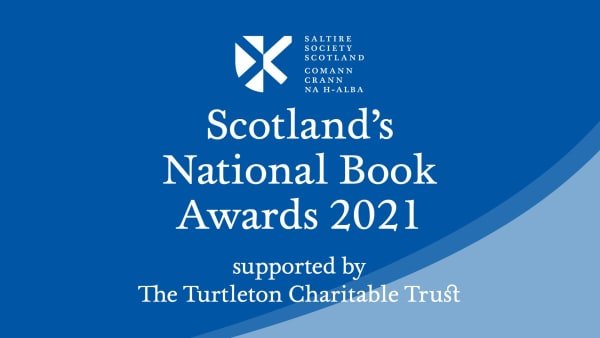 The Saltire Society has announced the shortlist for the 2021 National Book Awards, and will name the winner at a ceremony on 27 November.

Scotland’s National Book Awards has six literary categories and three publishing categories. In addition the Calum MacDonald Memorial Award for the publisher of an outstanding pamphlet poetry work will be presented.

Each winner in the book categories receives a cash prize of £2,000 and will be considered for the Saltire Scottish Book of the Year, receiving a further £5,000 if they win.

Sarah Mason, Director of the Saltire Society, said: “We are delighted to be back celebrating Scottish books and publishing through Scotland’s National Book Awards.  The last two years have been difficult for everyone, but the strength and resilience we have seen from our publishers, authors and designers is inspiring.  Scotland’s National Book Awards have a long history of celebrating the richness of work happening in Scotland and the 2021 Awards are another stellar year. Congratulations to all our Shortlistees.”

There is also the Lifetime Achievement Award and as in past years will be presented to an individual who has made a meaningful creative contribution to the world of literature. It was first awarded to Alasdair Gray in 2019. Nominations are made by the public and a panel of judges decides on the winner.

The winners of each category will receive a bespoke Award created by Inverness-based artist Simon Baker of Evergreen Studios.  Winners of all the Awards will be announced at a ceremony at Waterstones in Sauchiehall Street in Glasgow on the evening of Saturday 27 November attended by the judges, shortlisted authors and publishers.  The ceremony will be live-streamed and tickets to watch online are available now on www.saltiresociety.org.uk.

Garry Mackenzie, Ben Dorain:  a conversation with a mountain (The Irish Pages Press)

Elle McNicoll, A Kind of Spark (Knights Of)

Peter Ross, A Tomb With a View (Headline Publishing Group)

Kenneth Roy, In Case of Any News (ICS Books)

supported by the National Library of Scotland.

Ian Armit & Lindsey Buster, Darkness Visible:  The Sculptor’s Cave, Covesea, from the Bronze Age to the Picts (Society of Antiquaries of Scotland)

Richard Whatmore, Terrorists, Anarchists and Republicans:  The Genevans and the Irish in Time of Revolution (Princeton University Press)

Scotland’s National Book Awards Publisher of the Year in partnership with Publishing Scotland.