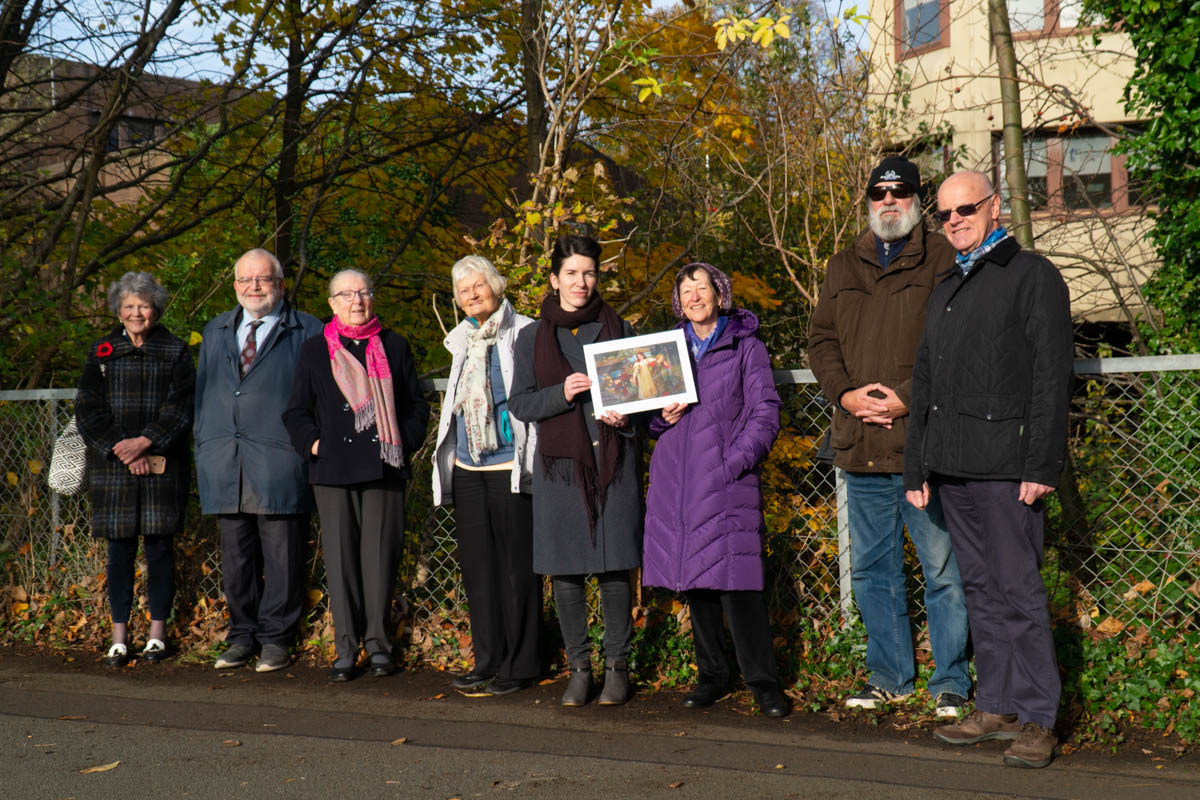 A new plaque was unveiled on Wednesday in Roseburn Park which commemorates the artist, Charles H Mackie, RSA, RSW, who died in Murrayfield in 1920.

Inspired by the recent exhibition at the City Art Centre, Murrayfield Community Council has provided the plaque which is sited on the northern side of the shared path.

Mackie rented a studio on Murrayfield Road from 1896 on the bottom floor of the old Roseburn Primary School and the headmaster lived on the top floor.

The building was demolished by the council in the 1960s and replaced by a modern office building and the plaque is on the opposite bank of the Water of Leith directly opposite.

He then introduced the two experts who unveiled the plaque and also thanked the Water of Leith conservation volunteers who had very kindly swept the leaves away from in front of the plaque just in time for the short ceremony which several members of the Community Council attended.

Dr Helen Scott, Curator at the City Art Centre and Pat Clark, author of the Mackie biography then unveiled the plaque and posed with a photo of Mackie’s work, There were Three Maidens pu’d a Flower (By the Bonnie Banks o’ Fordie), c.1897. which is owned by the City Art Centre in their collection.
Pat Clark, the self-declared “world authority” on the artist, told The Edinburgh Reporter that Mackie used to watch polo matches on the pitches which now lie between the Water of Leith and BT Murrayfield, and that he painted the Pentlands from his deathbed in the house/studio on the bank of the Water of Leith.

Ms Clark’s book about Mackie (‘People, Places and Piazzas. The Life and Art of Charles H. Mackie’) was a work which she explained was “many years in the making”.

Pat said: “I went to Australia, I went to France and I tried to follow in Charles Mackie’s footsteps. I encountered his last living relatives who live out in Melbourne, Australia, and I tracked down many of his paintings although I have to admit that some are lost to posterity.

“But many of the best paintings he ever created were actually executed here in Murrayfield. He was born in Aldershot where his father was a serving soldier, and then attended George Watson’s College in Edinburgh. He made his home and studio here.

“He was a unique artist influenced by a group of artists in France called Les Symbolistes. He met Vuillard and brought the first Vuillard work back to Scotland. His art grew out of his Scottish roots, but it also reacted to the influences of the Nabis in Paris. They in turn had been influenced by Gauguin. Charles Mackie is the only Scottish artist of that period who actually met Gauguin and who was taken round his studio.”

Mackie is buried in Warriston Cemetery. In the 1890s he was commissioned by Patrick Geddes to produce murals for Ramsay Garden in Edinburgh’s Old Town, as well as illustrations for the pioneering journal The Evergreen. In later years, Mackie spent time in Yorkshire, where he joined local artists groups and provided support and tuition to the young Laura Knight. He was a founding member and Chairman of the Society of Scottish Artists, and was elected to the Royal Scottish Academy in 1917. He exhibited his work widely, both in Scotland and further afield. However, despite his many achievements, he has always been treated as a peripheral figure in the story of Scottish art.

As a mature artist, Mackie worked with an impressive range of media, not only producing oil paintings and watercolours, but also murals, woodblock prints, book illustrations and sculpture. His influences were quite diverse, drawing inspiration from French Symbolism, the Celtic Revival movement and the landscapes of his European travels.

Dr Helen Scott curated the summer exhibition at the City Art Centre this year, and said it was a very successful way to reopen the gallery to the public. It had been intended to put on the Mackie exhibition in 2020 to coincide with the centenary of his death, but Covid-19 caused a year’s delay.

Dr Scott said: “It was wonderful to finally be able to put it on this summer. There were more than fifty artworks in total including watercolours, oil paintings, drawings and woodblock prints as well.

“I was invited along today as a result of the exhibition but Pat Clark is the expert. I first met her when I had just started working at the City Art Centre in 2013. She got in touch with me as we had a number of artworks by Mackie in the collection already and she was researching him. Her enthusiasm for the artist was completely infectious, and the following year we started talking about putting on an exhibition – so it was seven years and one pandemic later we were able to stage it with Pat doing much of the research.

“Her book has raised Mackie’s profile as few people were aware of him as an artist. We have many comments in our visitors’ book saying that people had not heard of him before but also that they want to find out more about him. It is lovely to memorialise him with this plaque here opposite where his studio was.

“He had a tremendous connection to Edinburgh having been to school here, having studied here as as a young artist and, though he travelled abroad quite a bit in his later years, he always came back to Edinburgh and had his base here.”