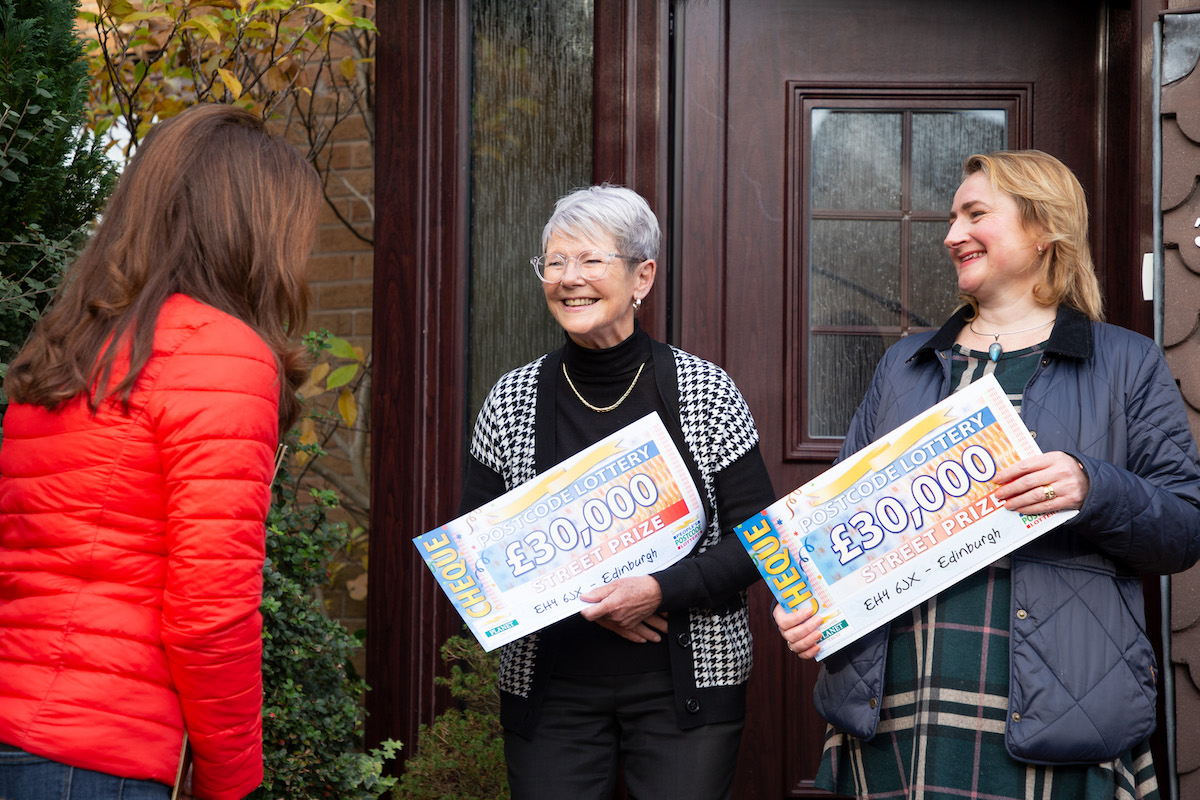 A mother and daughter in the same street in Cramond have shared in a £90,000 People’s Postcode Lottery win with another neighbour at EH4 6JX.

Ann Turnbull (75) lives close to her daughter Zoe Black (48) and they each won £30,000. The third winner wishes to remain anonymous.

The pair found out how much they’d won on Ann’s front doorstep. Ann couldn’t believe their luck: “Oh my God, oh my God, I’m absolutely shaking all over. Things like this don’t happen to us.”

Zoe added: “I’m shocked, amazed and delighted; It’s going to change a lot of things in my life.”

The mother and daughter were elated to win together. Zoe said: “We both enjoy holidays together and we do quite a lot together, so its really nice to be able to share this.”

Ann has lived on the street for over 40 years and plans to treat her whole family with the winnings, she said: “My other two daughters are excited as well and I said I’ll treat them too. It makes it more special when you can share it as a family.”

Zoe, who works as an architectural manager for a software company said she can now go on a ‘once in a lifetime’ holiday to New York: “I’ve got a big birthday coming up in a years’ time and I was saving up to hopefully go to New York for Christmas and New Year.

“I wasn’t sure if I was going to be able to save enough. It’s definitely going to become a reality now; I can take myself and my family.”

Her mum Ann grinned and added: “And now you can go to a fancy hotel.”

Zoe has always wanted to experience New York during the festive period after seeing the US city on TV and in movies. Zoe said: “I was hoping to go at wintertime to go and see the skating rink and spend New Year in Times Square. It looks like a really exciting place to go.”

Ann also intends to take a sunny holiday abroad with the whole family next year. She said: “When we all get together at Christmas, we’ll probably plan something. A summer holiday maybe for next year, that would be special.”

Zoe also says the money will make a big difference when helping out her two sons. She said: “My son is a student at university and my other son is applying to university. It’s expensive! They don’t get much money and it means it’s going to make it easier for them.”

The duo plan to celebrate with a bottle of champagne.

People’s Postcode Lottery ambassador Judie McCourt said: “I’m absolutely delighted for our three lucky players in Edinburgh! It was really special to be able to surprise Ann and Zoe and hear about their amazing holiday plans.

“A massive congratulations to each of the winners, I hope they celebrate tonight and enjoy spending the cash.”

Everyday throughout the November draws one postcode will be announced as a £30,000 prize winner. All the players in the postcode will win £30,000 for every ticket they hold.

People’s Postcode Lottery costs £10 a month to play and there are guaranteed winners every day. People play with their chosen postcode and are automatically entered into all draws.

Players of People’s Postcode Lottery have helped raise over £800 million to date for thousands of good causes across Britain and internationally.

This draw was promoted on behalf of Postcode Planet Trust. Through regular grant funding, the trust supports charities and good causes whose purpose is to support the environment and the enjoyment of nature with a particular focus on wildlife. Supported charities include African Parks, The Wildlife Trusts and Marine Conservation Society.