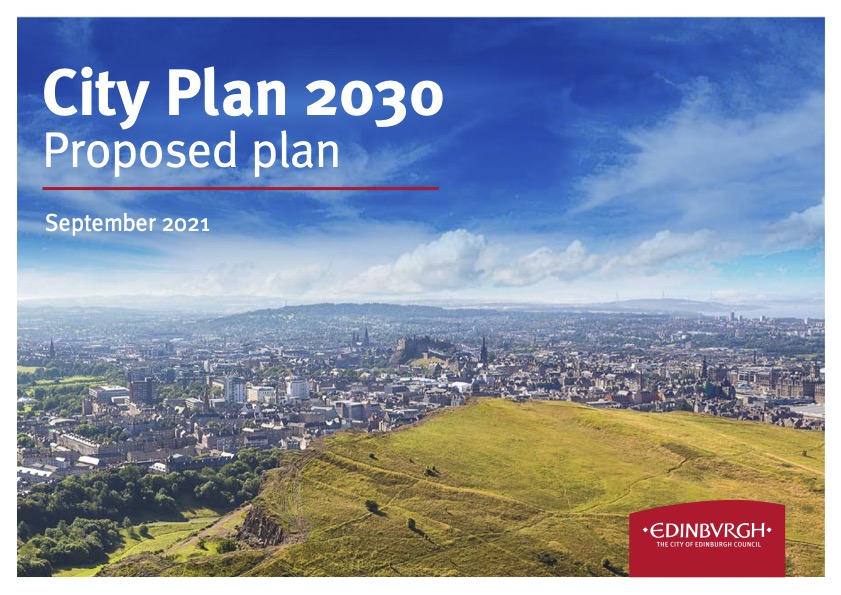 This article has been provided by the Planning Convener, Cllr Neil Gardiner, as part of our series of articles to be published during COP26, the UN conference on climate change which is being held in Glasgow from 31 October to 12 November 2021.

Cllr Neil Gardiner explains that agreeing the next steps for City Plan 2030 will help to meet the needs of the growing population and to achieve Edinburgh’s Net Zero 2030 ambition.

The plan is the next step to ensuring new development in Edinburgh over the next ten years is sustainable and contributes positively to our capital city. This builds on last year’s consultation where we asked for your views about our future direction, which have been incorporated into the proposed plan. The next steps will be the period of representation, followed by a government reporter reviewing the plan before adoption by the City.

Making best use of land we have available to sustainably accommodate Edinburgh’s growing population, our proposed plan uses ‘brownfield’ land to build new low energy vibrant communities, supporting Scottish Government’s national ‘20-minute walkable neighbourhood’ approach. These new communities will be built on ‘brownfield’ land around existing transport networks with plenty of active travel options so people can move around easily and live in affordable high-quality homes, with great culture and leisure activities and educational and health facilities nearby.

Recalibrating how our city grows is appropriate, rather than forever spreading continually outwards into precious greenfield land. We need to protect Edinburgh’s beautiful green setting from Pentlands Hills to the Forth, increase biodiversity, helping to address physical and mental wellbeing, reduce flooding and other climate impacts, as well as improving air quality.

A new sustainable neighbourhood in the west will utilise the excellent existing transport infrastructure, with the tram line running through and nearby network rail station. Land for this new quarter was previously designated largely for business development in the 2016 plan, together with the disused airport runway.

We’re already developing one of the most sustainable new neighbourhoods in Scotland at Granton Waterfront and yesterday council agreed an Outline Business Case for the first phase of this ‘brownfield’ regeneration. Over the next 15 years this will deliver 3,500 net zero carbon homes, a primary school, health centre, commercial and cultural spaces, sustainable transport provision and a new coastal park. Councillors also considered ambitious plans to join with our public sector partners to expand the already established leading European health innovation district at Edinburgh Bioquarter in the south east of the city, subject to Council approval at the end of this month.

Providing more environmentally friendly affordable homes is a huge priority. Developers will need to make sure that one third of their houses in residential developments are affordable and we’ll continue delivering this city’s own ambitious affordable housing programme. The plan also includes policies limiting the number of short-term lets, which currently put pressure on house prices and rents and taking much needed houses out of supply as well as causing issues such as anti-social behaviour.

Going forward, we will work with developers asking them to rise to the challenges of rapid climate change and finite resources. Developers need to think more carefully about location, using the land we have available effectively, through sustainable design. All of which contribute to sustainable long-term value.

This bold and comprehensive plan sets out the best options for people in Edinburgh to live in sustainable communities where everyone can share in the city’s success. This new direction in city development makes economic and environmental sense over the next 10 years and well into the future.