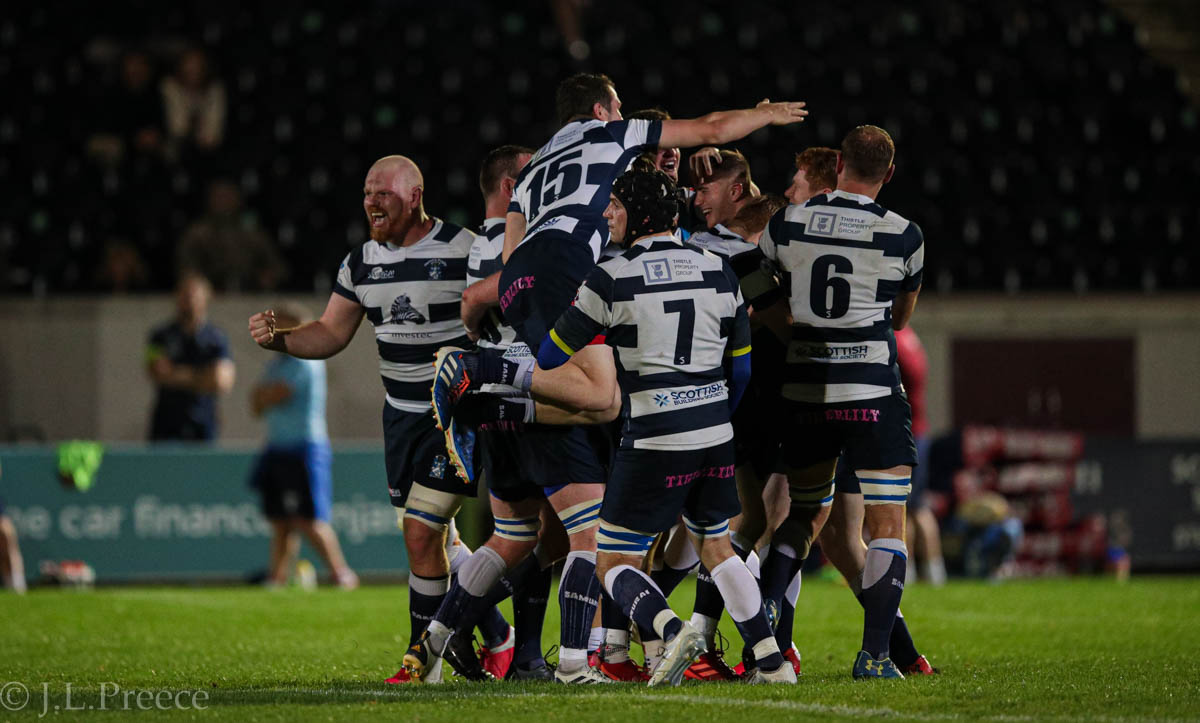 It’s been a while, but being able to attend live matches is back (although, to be fair, it’s been back a few weeks, but various Festivals got in the way) and, following a couple of practice matches (for me – JLP) this is our first match report since 22nd March 2020.

The match in question was played at Myreside between Watsonians Rugby and Heriots Rugby in Round 6 of the FOSROC Super6 competition.

Watsonians were quickly on the move from the start and drove up the edge of Heriots’ 22. Returning scrum half, Reece Cullen kept the game on the boil for the home side and they were eventually rewarded with a penalty in the fourth minute. Stand off, Marc Morrison stepped up to slot home the kick for 3-0 to the home side.

There followed a brief period of kick tennis as the sides probed for territory before Heriots took the initiative and pushed ‘Sonians back to their five-metre line.

The home side forced a scrum, but Heriots were straight back on the case from Cullen’s clearance, but ended up with another close in scrum and Cullen clearance.

17 minutes in, following some fine play from both sides, the visitors were awarded a penalty but their 10, Bruce Houston missed the kick, so 3-0 it remained.

He had another chance a few minutes later and, this time, stuck the ball between the posts for 3-3 with 23 minutes played.

Watsonians came roaring back from the restart, pushing deep into Heriots’ territory with a penalty kick to touch.

Winning their close-in lineout, their maul powered on only to be pulled down for another penalty. The ball was quickly recycled, but the second push was also dragged to the floor, earning Watsonians a penalty try and a 10-3 lead. For their troubles, Heriots were ‘awarded’ a yellow card to Fraser Hastie, reducing the Goldenacre side to 14 for 10 minutes.

The home side did their best to press home their one-man advantage, but strong defence from Heriots, coupled with the odd handling error meant that no further points were added in the interim.

However, just before Hastie made his return. a second yellow on 36 minutes, this time for back-row, Ian Wilson gave the home side a huge lift.

Despite Hastie’s return to the fray, an injury time try for Watsonians’ Michael Badenhorst – converted by Morrison – meant the Myreside men went into the break with a healthy 17-3 lead.

Within two minutes of the restart, Heriots were on the score board. Starting the move deep in their own half, Lloyd Wheeldon sprinting half the length of the pitch prior to passing the responsibility onto Stuart Edwards who went over in the corner for the try. It remained unconverted, but Heriots were back in the game at 17-8.

Once again, the following period of play was largely controlled by the home side, as they pounded away at the visitors’ line. Heriots, for their part, defended well and turned over a few balls to clear.

As the game entered the final quarter, Heriots were in a ascendancy and were rewarded with a penalty try of their own as a drive for the line was stopped illegally. Try awarded and Watsonians’ Steven Longwell binned, the score was now worryingly close at 17-15.

The next ten minutes, or so, were fairly evenly matched with neither side gaining much on an advantage until, in the 72nd minute, a chase for a through ball saw the visitors’ player bowled over. Replacement, Nathan Chamberlain stepped up the slot home the 25-ish metre kick to put Heriots into the lead for the first time at 17-18.

Five minutes later, Watsonians were back in the lead when Morrison’s penalty sailed over for 20-18 with three minutes left on the clock.

It was three minutes that turned into five minutes as an over time penalty award from a scrum infringement just inside home territory saw Chamberlain slam the ball over in complete silence for 20-21 and the match.

All-in-all, a decent match with plenty of incident and well structured play. Despite the loss, Watsonians still headed the table, three points ahead of Southern Knights, with the weekend’s other two matches still to be played.

One thing, though… It’s good to be back!