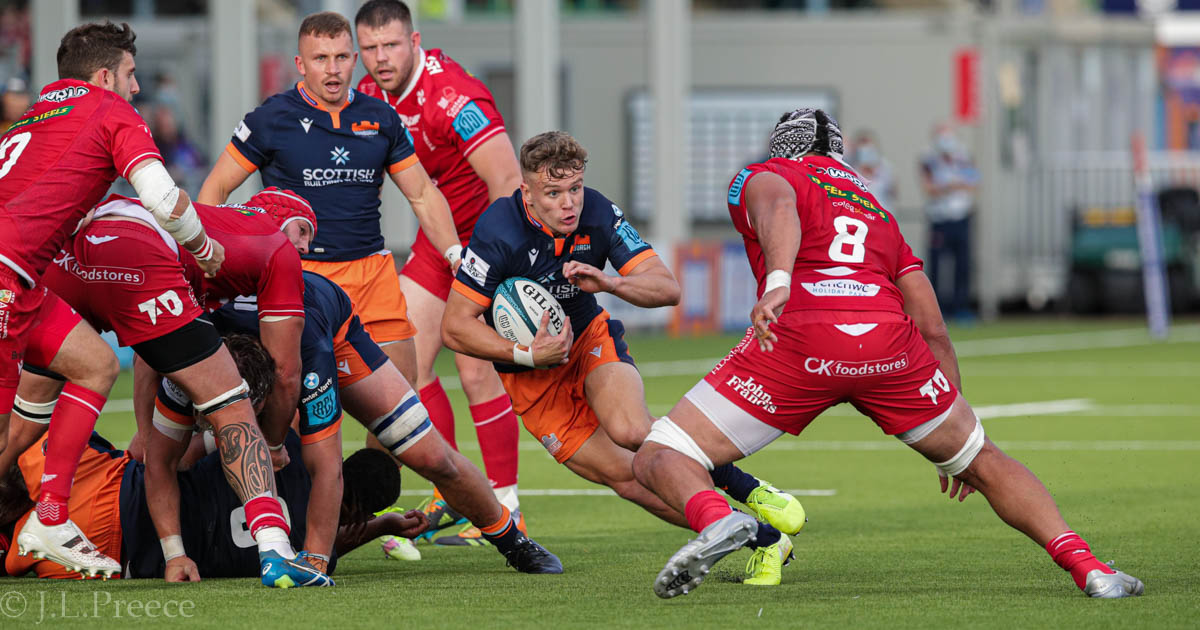 With a newly named stadium and a new Championship in the offing, Edinburgh Rugby welcomed Scarlets to the Dam Health Stadium for the opening round of the United Rugby Championship.

Right from the off it was…. all a bit tedious, as the two teams went into, what seemed to be, hours of collapsing scrums just inside Edinburgh’s 22…

However, after that episode was sorted, as Edinburgh tried to get clear, Scarlets were in a fine position to pressurise the home defence with a well worked passing move that lead to the first ‘try’.

Unfortunately for the Welsh side, the final pass was deemed to be forward by the officials and the try was chalked off.

The home side then put together a move that saw Darcy Graham burst through and up to the opposition 22, but the officials were on their game and that was pulled back for a forward pass.

11 minutes in though the Welsh side were over for a ‘counter’. Another cross-field move found space down the left touchline and Steff Evans launched himself over for the points. With the conversion missed, it was 0-5 to Scarlets.

Edinburgh struggled to gain a foothold from the restart and the visitors won a penalty, then encamped themselves near the home line, winning a string of penalties from various line out infringements.

It wasn’t to be, though, as they were turned over and the ball cleared far up field.

This put Edinburgh on the front foot and, eventually lead to the first home try.

The pack put in a truckload of work keeping the defence busy, but a couple of turnovers were cleared, before the ball was returned straight back.

Blair Kinghorn’s try came from a powerful drive from centre, Mark Bennett, who drew in the defence leaving the No. 10 to collect his offload and dive in under the posts. He then converted for 7-5 after 24 minutes.

Edinburgh’s second try came after a period of fairly evenly matched play – including an excellent break from eventual Man-of-the-Match, Ben Vellacott – situated mostly in Scarlets’ half. The pack eventually settled in around the five-metre line, rucking along until Bennett collected the ball and charged through a gap to dot down under the posts.

Kinghorn converted again for 14-5 on 34 minutes.

As is the way of these things, the visitors struck back right after the restart when their 10, Dan Jones slotted home a penalty for 14-8 with four minutes left to play.

That wasn’t the end of the scoring as – as is the way of these things – Edinburgh fired straight back with their third try of the half.

The mercurial winger needed no further invitation to burst through the line and scramble over for the try. Jones almost pulled the Edinburgh man down, but Graham, mostly, regained his feet to score the, unconverted try, for 19-8 at the break.

Five minutes into the second half, and with the floodlights beginning to take over, Scarlets ‘pulled one back’. In a repeat of their first half, non-try, move, Evans launched himself down the left touchline and then fired himself at the line.

However, once again, the visitors were to be disappointed as a wee check by the TMO saw a foot over the line, so it was ‘No Try’ once again

But their tails were up and a further period of sustained pressure saw them over the line for a, confirmed, try when Keiron Hardy broke through for the visitors’ second. Dan Jones then converted for 19-15 after 52 minutes.

Edinburgh came back under pressure in their 22 for a time, but they worked the ball clear and fought their way back to the other end. A superb passing move that swept one way, then back the other, ended with the ball in the hands of Graham who swerved through for his second, and Edinburgh’s fourth, try of the evening.

The conversion brought that to 26-19 with just over 20 minutes left on the clock.

Scarlets, once again, came to the fore and piled on the pressure causing the home side a few issues before that pressure told and they scored their third try.

Following another, sweeping back division move, outside centre, Jonathan Davies broke a couple of tackles, then slipped the ball to Johnny McNicholl, the No. 15 ‘doing the honours’ for 26-22 on 66 minutes.

The final few minutes were a touch concerning for the Edinburgh side as the visitors piled on the pressure again, but they held out for their first win at that 26-22 in the, inaugural, United Rugby Championship.

So great game and a great atmosphere. Jury’s out on the celebratory music*, though…

*A bit of digging has revealed that the players have all chosen their own ‘try tracks’. Darcy Graham’s is the ‘Can-Can’….. Other ‘try tracks’ are available…..