The redevelopment of the A720 Sheriffhall roundabout, which is part of the Edinburgh and South East Scotland City Region Deal, will not be complete until 2027.

The Sheriffhall roundabout is currently the only junction on the Edinburgh bypass which is not grade-separated, meaning the city bypass is at the same level as the A7 and A6106 local approach roads.

And despite years of planning, the latest timetable for the work has suggested the changes will not be operational until ‘late 2027’- with the assumption that objections to the scheme will lead to a public inquiry next year and the tender process not expected to start until 2024.

The project will cost £120m as part of the City Region Deal.

The leader of The City of Edinburgh Council, Cllr Adam McVey, said: “While the project isn’t directly in Edinburgh’s boundary it obviously is of significant interest to people in the capital.

“We need a bypass that works for the region and Sheriffhall is an important part of that.

“Many issues have been addressed and it’s clear the project will improve active travel, relieve congestion and encourage traffic onto the by-pass and out of residential areas of Edinburgh.

“We will continue to work together as a region with neighbouring local authorities, SEStrans and Transport Scotland throughout its development, and to monitor its impact once in place.

“One key element of this agreement is to ensure that all partners work together to minimise traffic travelling across boundaries in the region and support public transport and active travel alternatives.”

A report, authored by the City Region Deal and Transport Scotland, and which was presented to a City Region Deal committee meeting on Friday, stated: “The proposed scheme is expected to deliver significant benefits by providing high quality active travel facilities to address severance challenges and deliver a step change in accessibility for walking and cycling.

“It will also improve road safety and will relieve the significant congestion as well as journey times and journey time reliability for all road users (including bus services) due to the improved traffic conditions on local roads resulting from the separation between strategic and local traffic.

“Overall the proposed scheme is expected to reduce journey times and improve journey time reliability for A7 and A6106 traffic together with the A720.

“The design of the proposed scheme, together with the wider active travel and public transport benefits, should not lead to significant additional congestion on the local road network.”

According to the timetable in the report, a public enquiry would begin in early 2022, “subject to ongoing negotiation with objectors”, and will form the basis of a public consultation.

Ministers are then expected to make a decision in late 2022 as to whether the project will go ahead.

The tender process will begin in Spring 2024, and is set to be concluded within a year, before construction commences in Summer 2025, with a view to the scheme becoming operational in late 2027. 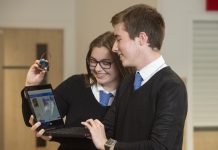 What is in the detail of the City Region Deal?