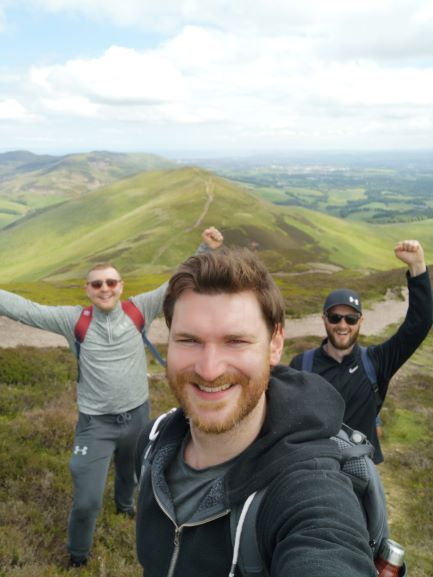 Actor Calum Barbour is taking part in a challenge to raise funds for Chest Heart & Stroke Scotland after his father died of a stroke.

The 30-year-old who appeared in both Outlander and Trainspotting set himself a target of raising £3,000 by participating in the 24 Peaks Challenge in the Lake District. This involved climbing a daunting 24 peaks over two gruelling days.

Calum, who works as a guide at the Edinburgh Gin Distillery when he is not acting, said: “I’m young, fit and healthy. But, in all honesty, I don’t think I realised what I’d signed myself up for.

“I’ll never forget the doctor saying that if dad recovered, he’d have a mountain to climb to get back to health. So, I thought I would take on a mountain for him and for the many others who have gone through that struggle. Then I realised what’s involved and I thought ‘oh no!’”

“It’s been a very tough couple of months. We’ve had to go through all those firsts – dad’s birthday, his and mum’s wedding anniversary.

“Dad was a huge music fan and a very keen musician. It’s something we always had in common. I’ve uploaded a video of me singing one of his favourite Beatles songs, Blackbird, on to my social media accounts in his memory. And I’d going to do some busking and boost my fundraising total that way.

“I chose to raise funds for Chest Heart & Stroke Scotland because you ensure people living with these conditions receive the necessary care they need. I hope the money I raise can help with rehabilitation for stroke victims, and to help provide physical and emotional support for those living with the conditions and their families.

Cat Wilson, Community and Events Fundraiser for CHSS said, “Calum is taking on such a heartfelt challenge for Chest Heart & Stroke Scotland and for that we are so grateful.  All money raised in Scotland stays in Scotland to support people living in our communities with chest, heart and stroke conditions, to provide people with the vital support that they need to do more than survive.

“It’s great to see Calum and his friends out training hard for his challenge and we want to wish him all the best in his epic 24 Peaks Challenge in September, he is a true fundraising superhero!”