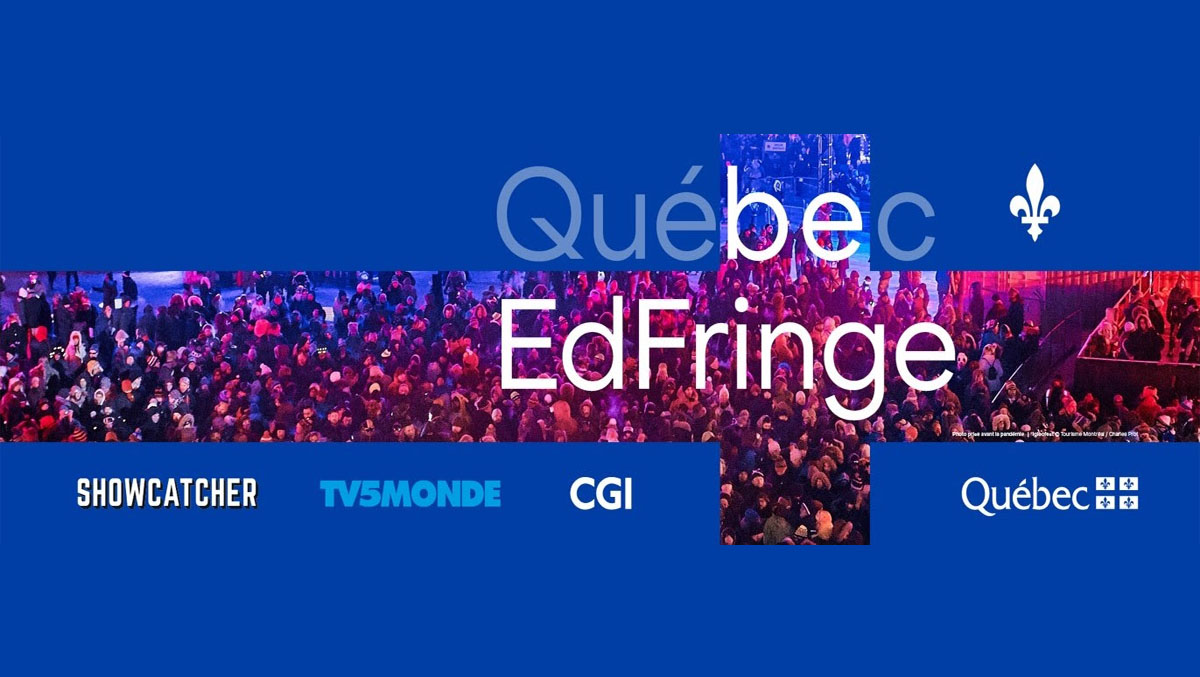 The Québec Government Office in London and Assembly Festival today launch a showcase enabling Québec artists and culture to continue to connect with and entertain Fringe audiences and industry through a digital venue on Showcatcher.

The showcase of circus, theatre and dance selected for Québec@EdFringe continues Assembly Festival’s regular presentation of Québec artists and is being launched in a fun packed hour-long broadcast on Thursday 5 August at 6pm before the shows start running at showcatcher.com/quebec from Friday 6 August.

From among the applicants six ‘Stars’ have been selected who will lead the presence online. The Stars of Québec@EdFringe are:

Extraordinary circus company FLIP Fabrique demonstrates its ingenious brand of acrobatic physical comedy in two shows – Six° which explores the sweet madness of waiting, the intricate beauty in correspondence and unexpected encounters wondering if the sixth person, the missing connection was you?

Through Blizzard, FLIP Fabrique takes you on a crazy, poetic and gentle journey in the dead of winter, and invites you to lose yourself in a moment of complete wonder. With performers at the peak of their art and outstanding visual poetry, Blizzard promises to blow away everything in its path.

Assembly Festival favourites Machine de Cirque’s La Galerie sees circus invade the museum! Seven zany acrobats and an electrifying musician take in a monochrome exhibit. With a creative spark, they set off an explosion of colour. In mocking defiance of convention, these wacky and endearing characters eagerly explore the exhibition inside out. Dizzying feats, astonishing discoveries, poetic liberties, and a serious dose of some silly good fun come together to fuel this ode to creativity.

Circus stars The 7 Fingers’ Out of Order plunges us into a not-so-distant future where the theatres are empty, meeting places and cultural venues are no longer permitted, physical contact is prohibited and artists are forced to meet secretly in forsaken spaces.

Spread out across this post-apocalyptic setting, ten gloved and masked characters, scrutinize one another, prepare, approach and avoid contact. Tongue firmly in cheek, Out of Order is a look at the social balance between raw animal instinct and the elevation of minds, bodies and souls in an educated and conformed society.

La Otra Orilla’s work frequently develops from a dialogue between dance and music. Founded by Canadian dancer Myriam Allard and Franco-Tunisian singer Hedi Graja, the company is known for its hybrid performances that draw on flamenco roots and reinterpret the artform, introducing and transforming it through the multiple cultural and artistic influences of its creators. At Québec@EdFringe they present their latest work, Rite.

Defenders of contemporary dance in Canada, FÔVE diffusion presents two shows as part of the showcase. GROUND Unplugged, selected as a ‘Star’ show, explores individual and collective urges, the resonance and resistance among five bodies united by gravity. With its cinematic aesthetics that split up time and space, GROUND reveals in the material of the body the nature of our human condition, showing glimpses of everything that, instinctively or physiologically, keeps us together.

Other artists and companies include:

Patricia Légaré Eddisford – the world premiere of The Tarantula, a piece about #MeToo and power dynamics, from 6 August

FÔVE diffusion also performs Bones & Wires. The meeting of two worlds, of two solos within a single spacetime. One focuses on memory and family, the other on overtechnologisation and the fixation on the future.

Ingried Boussaroque, Director for Culture (UK, Ireland, Nordic Countries) said, “We are excited by the opportunity to do something really different this year to support more Québec artists than ever at the Edinburgh Festival Fringe. We have a fantastic line-up of companies taking part which really showcase the creativity and talent synonymous with Quebec and we look forward to championing their incredible talents internationally.”

William Burdett-Coutts, Artistic Director and Founder of Assembly Festival said, “We are delighted that international companies can still participate in this year’s Fringe through presenting their work online. With the ongoing restrictions on travel still in place, the Showcatcher site is an ideal platform to ensure that international work is still included in the Fringe programme. Assembly Festival has had a long relationship with Québec and we very much look forward to welcoming back live shows in 2022.