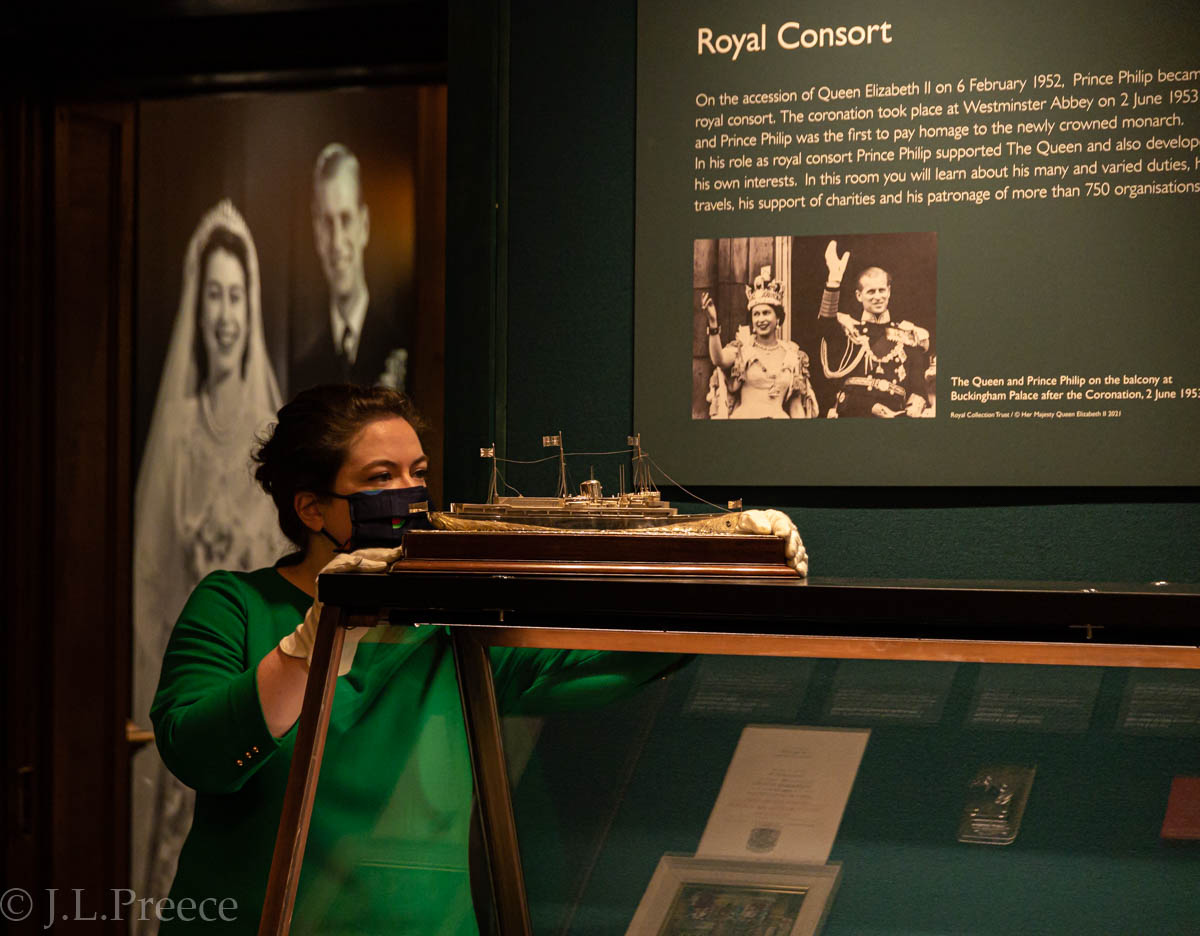 The summer exhibition at Holyrood Palace opens on Friday featuring paintings and articles which were important to HRH Prince Philip, Duke of Edinburgh, who died earlier this year.

His legacy is commemorated in the display which was first planned for His Royal Highness’s 100th birthday which sadly he did not live to celebrate, and is a partner exhibition to the one in Windsor which opened a month ago.

The exhibition will run until 31 October 2021 and is included in a ticket for the palace. There is a book related to the exhibition which is available in the gift shop.

With the exception of the pennant which bears his standard, and which was added after his death, we were told that Prince Philip was aware of all the objects which were curated for the exhibition. The larger size of standard was prominently draped over his coffin and it was thought only proper to include a smaller version in the Edinburgh exhibits. The pennant which is shown in a frame, was affixed to any car in which Prince Philip travelled when he was on duty alone without HM The Queen. The standard has one quadrant with three lions and the hearts of Denmark, the cross of Greece, pails or batons to represent Mountbatten all representing his family ties, along with a depiction of Edinburgh Castle.

There are many things which link Prince Philip to Edinburgh – not the least of which was his title which he was given on the eve of his marriage to then Princess Elizabeth. Items from Prince Philip’s wedding to HRH The Princess Elizabeth in 1947, including the wedding invitation, order of service and wedding breakfast menu are set out in one of the display cases.

By the end of Prince Philip’s life he had become the longest serving royal consort, usually happy enough to be in the background. But when it came to Her Majesty’s coronation Prince Philip took charge of the event, perhaps wanting to show a more modern side to the Royal Family. The live televised event filmed by the BBC attracted an audience of around 20 million. Cameras were placed in Westminster Abbey for the first time showing the Coronation Service and Richard Dimbleby commentated on the proceedings.

Among the treasures on display is the silver-gilt casket presented to His Royal Highness with the Freedom of the City of Edinburgh in 1949, on public display for the first time. One of his earliest visits with his new wife-to-be was a visit to Edinburgh during Royal Week. On receiving the Freedom he made a speech recalling his memories of going to the Burg as he and his naval colleagues called the capital. He was stationed briefly at Rosyth, and talked of the warm welcome which Scotland gave to servicemen during the war. The casket was made by city jewellers, Hamilton & Inches.

Another silver item on display is a silver windmill which he received as a gift from J. Arthur Rank on a visit to Caledonia Flour Mills, Leith. Mr Rank was better known for his ventures in film, but this was the family flour mill in Leith where he received the Duke of Edinburgh. There is a very interesting and really clear Pathé film of the visit to Edinburgh in 1955 at this link here.

Also recalling his time in the Navy Prince Philip’s midshipman’s logbook from 1940-41 is on display open at a page which charts his actions when on HMS Valiant during the Battle of Matapan for which he was recognised by a mention in dispatches.

Visitors will be able to admire the silver model of HMY Britannia presented to The Queen and The Duke of Edinburgh by Lloyd’s Register of Shipping in 1972 and Sir Hugh Casson’s original design sketches for the yacht’s sun lounge and dining room. Although King George VI had commissioned the yacht it was very much finished in the design which Prince Philip and HM The Queen agreed to. His Royal Highness travelled on HMY Britannia to undertake his first solo overseas tour in 1956–7, opening the Olympic Games in Melbourne before visiting the Antarctic. Prince Philip’s copy of the programme from the Olympic Games will be on display, alongside two paintings by the artist Edward Seago, who accompanied The Prince on the tour and is believed to have been the first professional artist to paint views of the Antarctic. The Royal Yacht Britannia is now very much at home in Leith, and open to visitors, and has won all manner of awards.

Prince Philip was educated in Scotland at Gordonstoun and the foundations for the Duke of Edinburgh Award arose from his relationship with the school’s founder and headmaster Kurt Hahn. Hahn suggested that the prince establish a programme helping young people to achieve their potential through physical activity, and supporting their local community. More than six million young people in the UK have taken part in the scheme since its inception in 1956.

In the final room where the exhibition is housed on the first floor of the palace there is a range of paintings from Prince Philip’s personal collection. He visited the Royal Scottish Academy each year from the 1960s onwards, and bought paintings there which were hung in the private apartments in Holyrood as well as other royal residences. One of the paintings on show is by Victoria Crowe, a graduate of Edinburgh College of Art, and show His Royal Highness’s interests in landscape and wildlife.