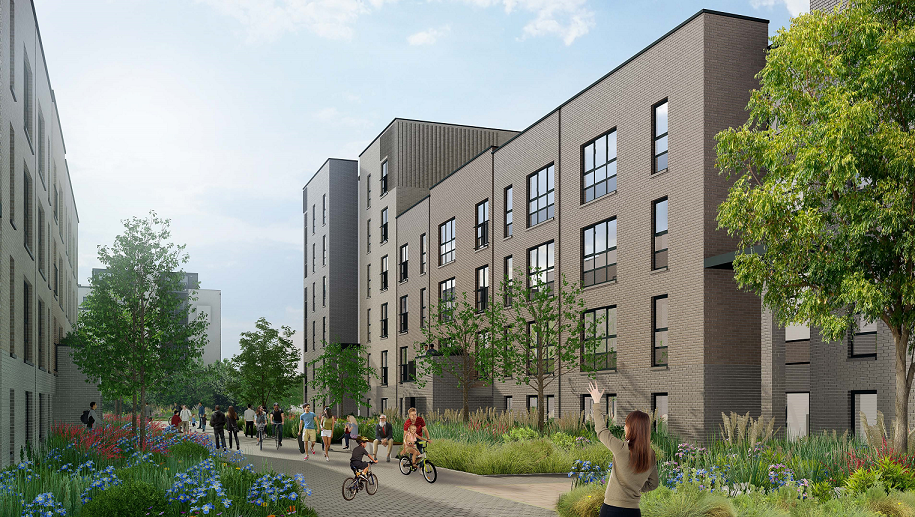 The City of Edinburgh Council has granted planning permission for 444 houses at Western Villages which will create the largest net zero carbon housing development in Scotland.

This is a major part of the Granton Waterfront Regeneration where more than 3,500 homes will be built over the next decade. These will be a mix of one, two and three bedroom flats with accessibility and a wide range of owning or renting options available.

The masterplan for the area will take account of the sea views and the nearby parkland, and will focus on active travel, electric car charging points, car club spaces and public transport links.

Partnering with CCG (Scotland) and architect Cooper Cromar in the creation of the new housing and using CCG’s Net Zero Home housebuilding standard with improved insulation, low carbon heating and renewable technology, the council is promoting its own policy of achieving net zero carbon by 2030 in Edinburgh.

Vice Convener for the Housing, Homelessness and Fair Work committee, Councillor Mandy Watt, said: “All of the steps we’re taking to make homes more sustainable will reduce the energy they use once occupied, thereby helping us to tackle climate change and become net zero carbon by 2030. That’s why we’re pleased to have CCG working with us as they adopt a new ground-breaking housebuilding standard.

“It’s great to see this development with a large proportion of social rent homes get planning approval. We have incredibly ambitious plans which form the bedrock of our housing strategy over the next ten years. There is a critical need for more affordable homes in Edinburgh and we are responding to that through the commitment to build 20,000 social and affordable homes by 2027.

“Western Villages forms part of the wider £1.3bn Granton Waterfront regeneration project which will create one of Europe’ s largest coastal city parks, providing opportunities for residents and visitors to reconnect with the city’s waterfront by offering more areas for leisure and outdoor experiences, civic spaces and sustainable housing.”

CCG Managing Director, David Wylie, said: “Housebuilding is going to play a major part in achieving our ambitious target of becoming a ‘net zero’ economy by 2045. With gas being removed from new build homes as early as 2024, it places greater emphasis on collaborative working as the partners on this project have demonstrated; utilising the CCG Net Zero Home building standard to create an affordable, scalable and practical solution that can ultimately be delivered now for any residential development.

“We commend the City of Edinburgh Council for their bold commitment and share their aspirations for a more sustainable future for Scotland.”

Cooper Cromar Project Director, Graham Connor, said: “Cooper Cromar are delighted to have been appointed as the Architect to design and deliver this important residential project delivering one of the initial phases of the Granton Waterfront Development Framework which sets out the Urban Design Framework and Design Guidelines for future developments within the wider Granton area.

“We have sought to create a masterplan that not only stands alone for its significance as Scotland’s largest net zero development but also respectful to the wider regeneration of Granton. It will complement and integrate with future phases of housing delivery and we look forward to working with the project partners over the coming years.”

Carbon Futures Director, Andrew Money, said: “We are delighted to have supported City of Edinburgh Council and CCG with their bold and ambitious plans for Western Villages. From the outset, the key areas of focus for the design team were to maximise fabric performance and avoid the use of fossil fuels. This approach, together with the use of on-site renewable energy, will greatly reduce energy demand and deliver a significant reduction in utility costs for homeowners.

“The energy strategy for Western Villages delivers a low-carbon development, future-proofed against upcoming government legislation and presents a fantastic example of how the construction industry can support the nationwide effort to reduce carbon emissions and create a more sustainable future.”

Construction of Western Villages is expected to begin in mid-2022.

The council explains the vision for Granton Waterfront like this: “As the largest regeneration project of its kind in Scotland, Granton Waterfront represents a once-in-a-lifetime opportunity to transition towards a greener economy. As one of the seven strategic sites within the South East Scotland City Region Deal, it will transform the north of the capital, building on Scotland’s vision for infrastructure, placemaking and people-led growth. Scotland’s ambitions to tackle climate change and transition to a net-zero-carbon economy are fundamental to the Granton Waterfront vision. With six public sector partners including two major national institutions, it is a unique collaborative venture. All are committed to maximising every opportunity to ensure the economic benefits of the development are shared fairly throughout the community.”

Listen to our podcast with Depute Leader of the Council and local councillor Cammy Day when we toured the area at Granton with him: